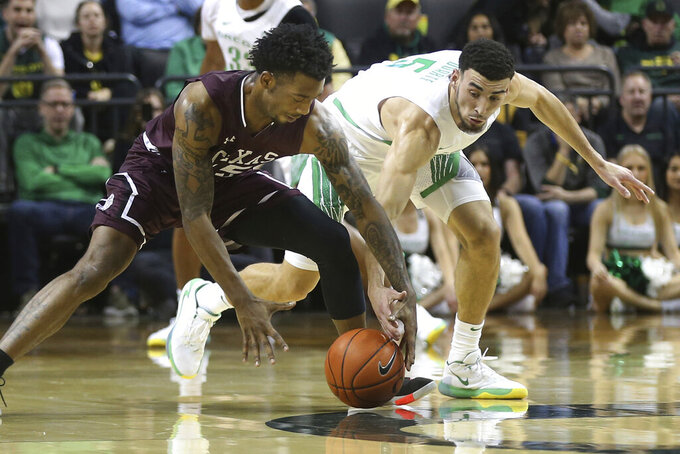 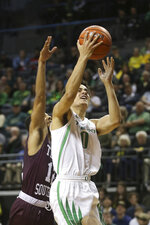 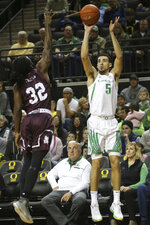 The senior guard led a late surge to help the eighth-ranked Ducks escape an upset scare against Texas Southern for an 84-78 victory Saturday night.

“Pritchard is outstanding,” TSU coach Johnny Jones said. “He’s an outstanding player and we knew that. For us to have a chance we’ve either got to keep him under control or if he’s going off we have to stop other guys, but he was creating some opportunities for others as well."

After trailing by three at halftime, the Tigers scored the first five points of the second half and upped the margin to 45-39 before the Ducks went on a 16-3 run to lead 55-48 with 11 minutes left.

Baldwin scored the next seven points for the Tigers, and Justin Hopkins' three-point play gave TSU a 58-56 lead with eight minutes remaining.

The lead changed five times over the ensuing four minutes, the last when Pritchard drove for a basket and a 70-69 advantage. It was also part of eight consecutive Oregon points for Pritchard. He scored the Ducks' final eight points on five free throws and a 3-pointer from nearly midcourt when the shot clock was running out for a 79-72 lead.

“We were just trying to spread the floor and we wanted to drive because we thought they were being physical with our drivers and eventually we’d get some calls there,” Oregon coach Dana Altman said, adding that Pritchard “really did some good things late, getting to the basket, getting to the free-throw line.”

Hot shooting spurred the Tigers to an early lead, and the margin reached 24-13 when Baldwin hit a 3-pointer that prompted a timeout by Oregon.

“We kind of let them do what they wanted to,” Altman said.

After TSU pushed the margin two points higher, a 3-pointer by Anthony Mathis sent Oregon on an 11-0 spurt, and the Ducks finally tied it at 28 on Chris Duarte's two free throws. Oregon's run reached 20-2 on the first of consecutive 3-pointers by Will Richardson, who led the Ducks with 11 points in the opening half. Oregon led 36-33 at halftime.

Texas Southern: The Tigers showed no fear playing Oregon for the third consecutive year. “We were fortunate enough last year, but we knew it would be a tough one for us,” Jones said. “I applaud our kids for being able to fight a seasoned and very good basketball team the way we did.”

Oregon: The Ducks could be due a rise in the polls with a least three teams above them losing this week.

After starting the first eight games of the season for the Ducks, graduate transfer Shakur Juiston missed his fourth consecutive game with a leg injury. He is Oregon’s second leading rebounder at 6.5 and is also averaging 8.8 points.

Texas Southern is back on the road for a game at Arizona State next Saturday. The Tigers play 11 of their 13 nonleague games away from home.

Oregon completes its nonconference schedule with a home game next Sunday against Alabama State. The Ducks then begin their Pac-12 schedule at Colorado on Jan. 2