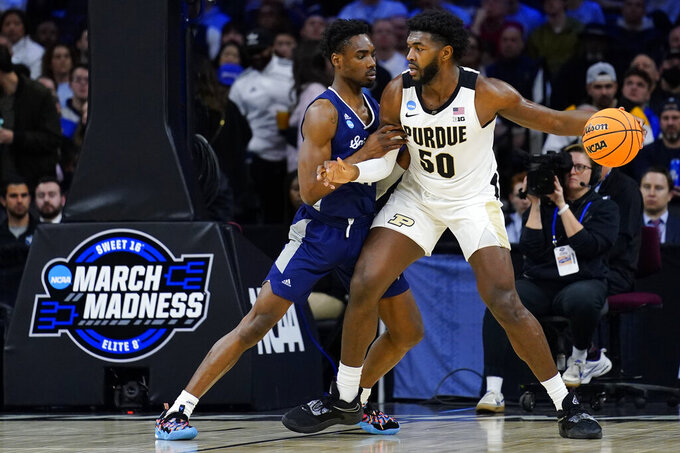 Purdue's Trevion Williams, right, tries to get past Saint Peter's KC Ndefo during the first half of a college basketball game in the Sweet 16 round of the NCAA tournament, Friday, March 25, 2022, in Philadelphia. (AP Photo/Matt Rourke)

WEST LAFAYETTE, Ind. (AP) — Purdue's Trevion Williams has announced he will sign with an agent and enter the NBA draft.

Williams could have played for the Boilermakers next season with the NCAA's pandemic eligibility exemption.

“What a ride this has been," Williams posted on Instagram Thursday. “Four years ago, when I started this journey at Purdue, there was no way to envision what my time here would become. It’s been filled with many more highs than lows, and I wouldn’t trade one second of this journey for anything. My brothers and I have accomplished a lot, and I hope that we leave this program in better shape than when we arrived.”

Williams is the second Purdue player to declare for the draft. Jaden Ivey also said he would turn professional and is projected to be an early first-round pick.

The 6-foot-10, 250-pound Williams was part of an imposing post combination with 7-foot-4 Zach Edey, coming off the bench all but four games this season and averaging 12 points, 7.4 rebounds and three assists. He and Duke’s Paolo Banchero were the only players nationally to have at least 425 points, 275 rebounds and 100 assists.

Williams is the only player in Purdue history to score at least 1,400 points with 900 rebounds and 200 assists. He did so while starting only 60 of his 130 career games.

Several mock drafts project Williams to be selected in the second round.