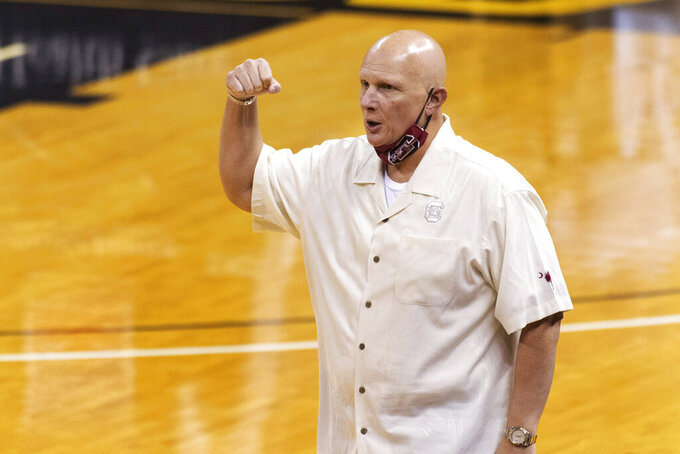 FILE - In this Jan. 19, 2021, file photo, South Carolina coach Frank Martin talks to players during the first half of the team's NCAA college basketball game against Missouri in Columbia, Mo. Martin thinks he’s bounced back from the worst season of his career. He believes his Gamecocks are ready for the same thing this year. (AP Photo/L.G. Patterson, File)

COLUMBIA, S.C. (AP) — South Carolina coach Frank Martin has bounced back from the worst season of his career. He believes his Gamecocks are ready to do the same thing on the court.

Martin had COVID-19 twice, including a stretch in January during the disjointed, stop-and-start season. The Gamecocks, who finished 6-15, didn’t play a game for nearly a month due to cancelations and postponements due to the virus.

South Carolina finished just 4-12 in the Southeastern Conference after winning 10 or more league games in four of the previous five seasons.

“My enthusiasm for this year is for Frank to be Frank,” Martin said. “Last year, Frank was not Frank."

Those two players competed at almost everything from the weight room to practice drills, Martin said. The coach said there is a similar feeling with this team. Martin said fresh faces, including older transfers like Chico Martin Jr. from Murray State, Erik Stevenson from Washington and AJ Wilson from Georgia Mason, have brought a fire to practices.

Bryant said his new teammates have blended in well, pushing the pace and showing determination to get back to winning.

Martin has relished the sense of urgency he's seen so far.

“We owe it to those guys to figure out a way to hit the fast-forward button in our relationship process," he said of his newcomers. "And they’ve done that.”

Another huge piece of the puzzle is the addition of 7-footer Josh Gray, who was a freshman at LSU who came to South Carolina. Gray is immediately eligible and has four years left.

Gray saw limited action in 10 games for the Tigers. He's ready to get more significant minutes to help the Gamecocks turn things around. His speciality, he said, is mixing it up near the basket.

Some other things to watch for this season:

The Gamecocks roster features USC Upstate transfer Brandon Martin, the son of South Carolina coach Frank Martin. The younger Martin said his dream was always to play for his dad and was excited to join the Gamecocks. The elder Martin said he's concentrating hard on ensuring their coach-player relationship doesn't impact their father-son bond.

Bryant is a 6-foot-6 senior who often wows crowds with his high-flying dunks. Couisnard is a 6-4 junior who averaged 10.1 points a game last fall. Both say they each learned what they'll need to improve on this season to have a professional future and that has them focused on South Carolina success.

Martin has said being COVID-19 free has improved his attitude about basketball and life. Just as important, he said, was a knee replacement operation during the 2020 offseason that has him back in the weight room and 55 year old feeling years younger. “I feel great,” he said.

Martin had his share of vocal detractors during the offseason who wanted South Carolina to change. Instead, Martin received a two-year extension that ties him to the school through 2024-25. He did not get a raise in the deal.

"Is it the contract I wanted? No,” Martin said in April. “But if they didn’t want me here, they could’ve fired me.”

South Carolina opens the season Nov. 9 against USC Upstate. It plays against a pair of ACC teams in Florida State and state rival Clemson, along with contests against Minnesota of the Big Ten and Georgetown of the Big East. SEC play starts Jan. 4 at home against Auburn.