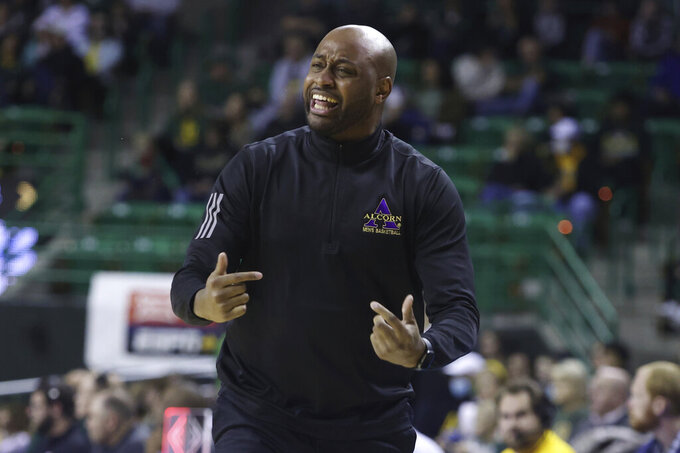 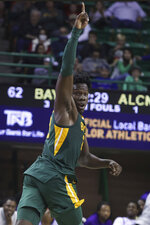 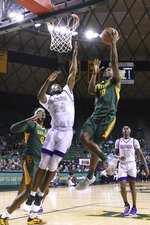 WACO, Texas (AP) — If top-ranked Baylor had any ill effects from a quick turnaround, it didn’t show.

The Bears were back in action on their home floor Monday night against Alcorn State, less than 48 hours after a road game at Oregon on Saturday.

Kendall Brown, Jonathan Tchamwa Tchatchoua and Flo Thamba scored 16 points apiece to lead five players in double figures, and No. 1 Baylor romped to a 94-57 victory against the overmatched Braves.

"In the first half, we wanted to be more aggressive and gamble because we felt like they were trying to shorten the game,” Baylor coach Scott Drew said. “We were able to get separation. There was a short turnaround coming from Oregon, and I thought they did a great job handling it.”

Dominic Brewton led the Braves (1-10) with 19 points and Darrious Agnew added 12. Alcorn State lost its fifth straight and has yet to play a home game this season.

“The kids have handled it well but it’s always difficult on the road, especially when you’re (1-10),” Alcorn State coach Landon Bussie said. “We’ve played three teams from last year’s Final Four (Baylor, Gonzaga and Houston), so we knew it was going to be brutal. We’re just trying to get better each game.”

Tchamwa Tchatchoua had a team-high nine rebounds for Baylor, and he and Thamba combined to go 14 for 14 from the floor. Akinjo had 14 points and seven assists.

“The great thing about our team is everybody shares the sugar, and every night it can be a different man,” Tchamwa Tchatchoua said. “Tonight, it was Flo going 8 for 8 from the field. I just love when he has success.”

Alcorn State: The Braves shot 54.2% in the first half but couldn’t maintain that pace in the second. They missed 14 of their first 16 shots after halftime and finished 8 for 33 (24.2%) in the second half as Baylor put the game away.

Baylor: Matthew Mayer was scoreless and fouled out in 13 minutes and leading scorer LJ Cryer sat out to rest an injury to his right foot that he sustained during an offseason workout, but the Bears had no trouble finding the basket. They shot 60% in the first half, led 50-33 at halftime and were never challenged in the second.

Cryer had a boot on his right foot, but Drew didn’t seem too concerned about his prognosis, at least not more than normal.

“Coaches worry about everything,” Drew said. “LJ’s a tough kid, and we’re praying for a quick return. The good thing is he takes care of himself. He’ll do a good job of listening to (trainer) Dave (Snyder). It was a smart time to rest him.”

Baylor: A week off before hosting Northwestern State on Dec. 28.