Villanova moves on from Wright with former assistant Neptune 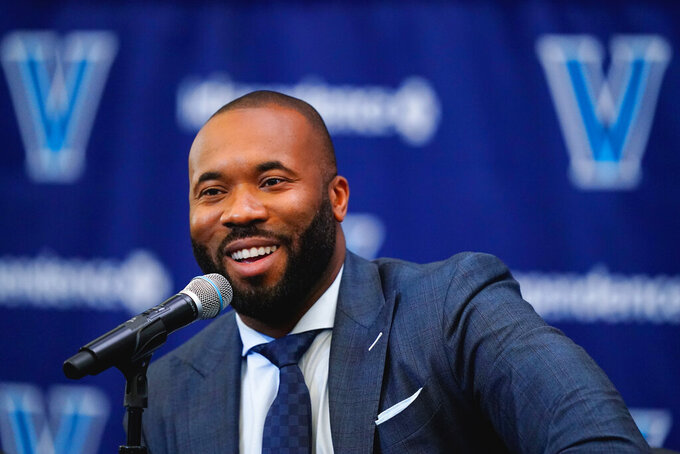 FILE - Villanova NCAA college basketball coach Kyle Neptune speaks with members of the media during a news conference in Villanova, Pa., April 22, 2022. Hall of Fame coach Jay Wright announced his surprise retirement after he won two national championships with the program. Neptune says he would be foolish not to try and emulate Wright in some way if he wants to keep the Wildcats a perennial national championship contender. (AP Photo/Matt Rourke, File)

VILLANOVA, Pa. (AP) — Jay Wright famously mouthed “bang” after Kris Jenkins won the 2016 national championship on a buzzer beater. Wright went back to the catchphrase well this month in his latest motivational video --- “just when you think you know what’s going to happen, bang” -- for the Philadelphia Union.

Wright squeezed in the extra work when he wasn’t rooting for the Phillies in a playoff game. Or as he acted as an adviser for Eagles coach Nick Sirianni. Wright even gave the commencement speech at Villanova’s spring graduation.

The former Wildcats coach has been spotted just about everywhere in the city since his stunning retirement at the end of last season.

His successor wouldn’t mind if Wright’s travels lead him back to the practice court.

“I try and beg him to come around,” Villanova coach Kyle Neptune said.

The Hall of Fame coach has tried to stay out of the spotlight on campus and let the 37-year-old Neptune find his own way with the program.

Much like Hubert Davis at North Carolina and Jon Scheyer at Duke, Neptune takes over a program that has hummed along as one of the nation’s best and expectations are as high as the championship banners that hang in the rafters. Wright won two of them -- and led Villanova to two more Final Fours, including last season -- before he stepped down and essentially made Neptune his hand-picked choice to keep championships coming.

Neptune certainly knows Wright’s blueprint following a lengthy stint that started in 2008 as a video coordinator and ended with him as the longest-tenured member on the coaching staff that won the 2016 and 2018 national championships. While some new coaches in any sport often try and shy away from comparisons to their successful predecessors, Neptune has embraced Wright’s methodology in building a Big East behemoth.

“I never focused on not being him,” Neptune said. “He’s a Hall of Famer. To me, the best coach in college basketball the last 10 years. I would like to be a lot like him.”

A season ago, Villanova posted a 30-8 overall record and advanced to its third Final Four since 2016. It also won the Big East Tournament title, the ninth consecutive season in which it claimed a regular season or league tourney crown. Neptune went 16-16 in his lone season at Fordham, an Atlantic 10 program with just four NCAA Tournament appearances.

Neptune said it was easy to slide back into the program after a year away.

“I think I learned to cherish how unique our players are,” Neptune said. “How locked in they are every day for what we do and not take that for granted. No knock against anyone at Fordham, but they just didn’t know exactly what we were looking to do.”

The Wildcats are again dotted with likely all-Big East picks and future NBA draft picks. The coach might not be the same -- but the winning streaks should have a familiar feel.

Villanova was picked to finish third in the Big East by the league’s coaches. It’s the first time since 2013-14 that the Wildcats were not picked first or second. Villanova is No. 16 in the AP Top 25, the lowest preseason ranking for the Wildcats since 2008.

Justin Moore still has no timetable for a return as he recovers from a torn Achilles tendon suffered in the Elite Eight win over Houston. The 6-foot-4 guard averaged 34.4 minutes, 14.8 points and 4.8 rebounds. He was a second-team All-Big East selection.

“When it first happened, I couldn’t grasp what was going on,” he said. “When I got back home, I got to relax, sit down with my family and friends and take into account what was really going on.”

Moore said he won’t come back until he’s “110%” and has done light individual workouts and other non-contact drills. Neptune said Moore “looks fine to me” but that team doctors will decide when he can return.

Cam Whitmore is the Big East pick to be Freshman of the Year but he is likely to miss the start of the season after recent surgery on his right thumb. Whitmore, a 2022 McDonald’s All-American, was injured in practice earlier this month.

The Wildcats open the season Nov. 7 against coach Fran Dunphy and La Salle. It’s another Big 5 team Nov. 11 against Temple. Villanova will face Tom Izzo’s Michigan State team on Nov. 18 in one of the major attractions of the seventh Gavitt Tipoff Games.