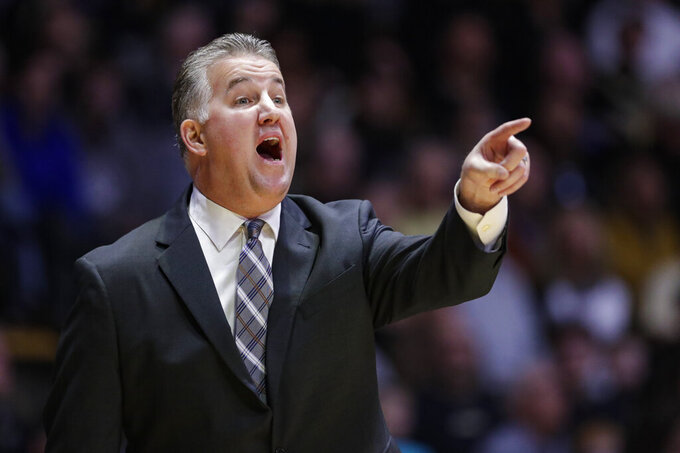 FILE - Purdue head coach Matt Painter gestures during the first half of an NCAA college basketball game against Rutgers in West Lafayette, Ind., in this March 7, 2020 file photo. Painter, like other conference coaches, is still waiting to see a final schedule. But he's already making contingency plans for what he expects to be a season full of adjustments. (AP Photo/Michael Conroy, File)

The upgraded role shouldn't come as a surprise to Boilermakers fans, who have seen Painter run the offense through other post players such as Caleb Swanigan and Isaac Haas.

Williams, a former Illinois prep star, made a solid impression as a freshman and broke through last season as Purdue's most consistent scoring option. He led the team in scoring (11.5 points), rebounding (7.6) and field goal percentage (51.5%) while finishing fifth in assists with 45.

But when swingman Nojel Eastern and center Matt Haarms, both starters, decided to transfer, Williams knew he would need to do even more. So the preseason all-conference selection spent the offseason preparing to take another gigantic step.

Painter said Williams made 13 of 14 free throws during Monday's scrimmage a dramatic improvement over his free-throw percentage (47.9) last season. He also has had seven assists both scrimmages.

The most intriguing newcomer might be 7-foot-4, 285-pound freshman Zach Edey, who grew up in Canada before finishing his prep career at IMG Academy.

Painter has been impressed with Edey in practice and given Purdue's proclivity for playing big, Edey could soon find himself as a key component. Painter acknowledged he's experimented with using Edey and Williams together, something Williams noted didn't work out very well when he and Haarms were side by side.

Either way, it gives Painter some options.

“I wouldn't say he’s the backup. He’s been really good at rebounding," Painter said when asked about Edey. “But the meat and potatoes, right now, will be both of those guys playing the five and backing each other up."

It's unclear when any of the three may return but a short bench allowed freshman guard Jaden Ivey to show what he could do.

“Today was his best day, not just his best scrimmage," Painter said Monday. “He's good at sprinting and shooting. A lot of guys come in and can knock down shots when they’re standing still, but he walked in the door and was able to shoot on the move."

Last season was a rough one for Aaron Wheeler.

Painter believes Wheeler is now back on track.

“I’m excited for him because I know he’s put in the time," Painter said. “That was really difficult for him to go through, it's tough for anyone who can shoot the ball to go through that."

While Big Ten coaches continue to wait on schedules with opening night just two weeks away, Painter has kept busy by building contingency rotations into his practice routine.

“I think with the landscape we’re going to go through here, a lot of things could happen where you’re going to be short-handed and you’re going to have to play with different lineups," Painter said. “So we need to keep experimenting with things."