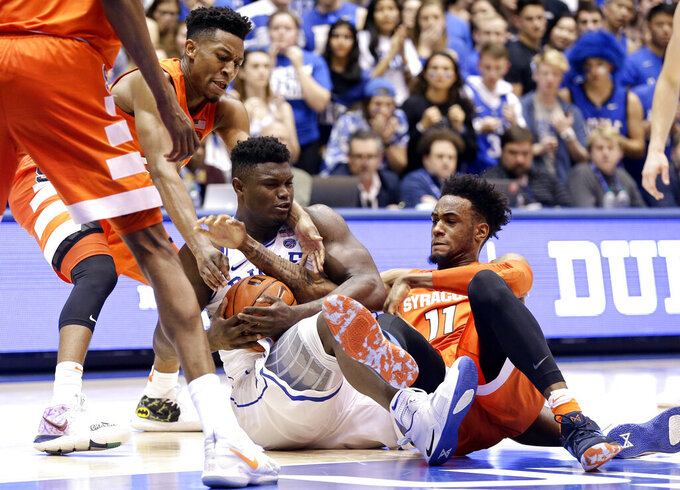 Without shooter Cameron Reddish, the top-ranked Blue Devils couldn't do it. And without point guard Tre Jones, their defense couldn't pressure the Orange, either.

Tyus Battle scored a season-high 32 points, and Syracuse rattled Duke in overtime in a 95-91 upset on Monday night— the Blue Devils' first home loss as a No. 1 team to an opponent other than North Carolina.

With Reddish out with flu-like symptoms and Jones suffering a right shoulder injury roughly 5½ minutes in — which coach Mike Krzyzewski said will keep him "out for a while" — the Blue Devils were down two starters and became a completely different team.

The Orange took full advantage, forcing the Blue Devils to attempt a school-record 43 3-pointers. They made only nine. And RJ Barrett finished with 23 points, but was 4 of 17 from 3-point range — the second-most 3s ever taken by a Duke player and the most since Bobby Hurley's 18 against California in 1993.

"When you get two guys hurt and injured, there is no game plan anymore," Krzyzewski said. "Our game plan was to pick them up full-court, put pressure on the ball, and that was working pretty well. Then, you're trying to survive, really."

"When (Chukwu) plays like that," coach Jim Boeheim said, "we're a different team."

Syracuse held Duke to 2-of-8 shooting in overtime while earning its second victory at Cameron Indoor Stadium since 2016.

"We were just letting them shoot the 3," Battle said. "Just backing up and trying to limit Zion's touches as much as possible."

Battle's jumper about a minute into OT gave Syracuse the lead for good at 89-88. Duke followed that with four consecutive empty possessions — three missed 3s and a turnover that Howard turned into an easy layup.

Barrett's 3 pulled the Blue Devils to 93-91, but Chukwu countered with a dunk off a lob from Howard to make it a four-point game.

Williamson had a career-high 35 points and 10 rebounds while playing two days after he was poked in the eye at Florida State. His free throw with 16.2 seconds left in regulation tied it at 85 for Duke (14-2, 3-1), but he missed a second go-ahead foul shot. Brissett grabbed the rebound for Syracuse, but Battle's 3-pointer before the buzzer bounced off the back iron.

Syracuse: The Orange looked nothing like the group that shot a season-worst 31.6 percent in a home loss to Georgia Tech two nights earlier, and they felt slighted by oddsmakers who had them as 17-point underdogs. Battle said Boeheim mentioned it to them before the game.

"'That's a 17-point spread. That's how much people respect you guys right now,'" Battle quoted Boeheim as saying. "We're competitors, so we took that really personal."

Duke: The night took an ominous early turn for the Blue Devils, when Jones' collar bone separated from his shoulder blade during a collision with Howard as he chased a loose ball before the first TV timeout. That injury has the potential to be a big problem for Duke, depending on how long he's out, because he's tops in the ACC in assist-to-turnover ratio while also serving as an elite on-the-ball defender on a team that entered ranked third in Division I in Ken Pomeroy's defensive efficiency rankings.

SHOT OF THE NIGHT

The game might not have made it to overtime had the Orange not hit an 80-footer at the halftime buzzer. They got the ball back with 2.7 seconds left after Duke couldn't get a shot off. Hughes took the inbounds pass and initially dropped it before taking three dribbles and flinging it from three-quarter court. It swished through to pull the Orange within 49-48 at the break.

Syracuse outscored Duke 89-77 after Jones was injured while shooting 45 percent in his absence. Jones had four steals when he was injured at the 14:23 mark of the first half. The rest of the Blue Devils combined for four steals for the entire game.

Barrett (30) and Williamson (20) combined to take 50 of the Blue Devils' 80 shots, with Barrett making eight and Williamson 12. The rest of Duke's players made 11 shots combined. "There's a burden that's placed on (Barrett) and Zion in that situation, because they know they have to carry more," Krzyzewski said. "And the fact that they tried to do that, I like that. We weren't successful enough to win, but the fact that they stepped forward and put it on the line, I like that."

Duke: Plays host to No. 4 Virginia on Saturday.