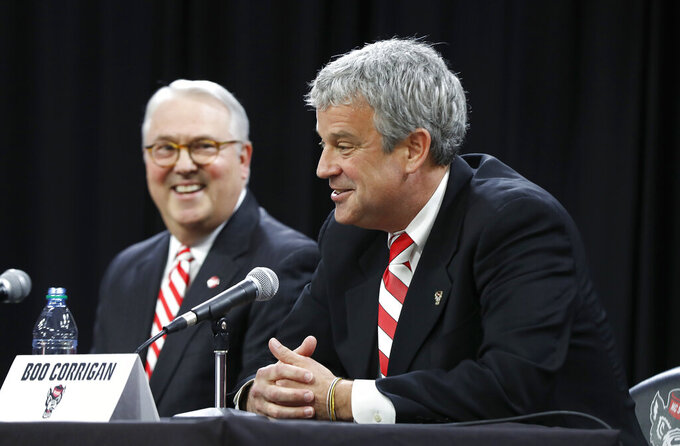 FILE - In this Jan. 31, 2019, file photo, North Carolina State chancellor Randy Woodson, left, laughs with Boo Corrigan after Corrigan was introduced as N.C. State's new athletic director, during a news conference in Raleigh, N.C. Corrigan has spent the first two months in the job getting to know the Wolfpack coaches and sorting out priorities for facility upgrades. He’s also getting used to the extra attention that comes with running a power-conference program. (Ethan Hyman/The News & Observer via AP, File)

RALEIGH, N.C. (AP) — Boo Corrigan has spent the first two months as North Carolina State's athletic director getting to know Wolfpack coaches and sorting out facility needs. He also is getting accustomed to extra attention that comes with running a power-conference program.

"I'm walking through a parking lot, and somebody says, "Hey Mr. Corrigan!" the former Army athletic director said with a chuckle in an interview with The Associated Press. "I'm like, how do you know who I am?"

The school announced Corrigan's hiring in January, though he didn't start work until April 30. He inherited a 23-sport program that made significant overall gains during Debbie Yow's nine-year tenure, though its men's basketball team faces lingering NCAA uncertainty after becoming entangled in the federal investigation into corruption within the sport.

Corrigan knows the Atlantic Coast Conference well, from his time working at Duke and Florida State and being the son of former league commissioner Gene Corrigan. He shrugs off the pressure of moving from Army to the ACC, noting: "It's hard to get a lot more intense than a three-star general standing in your office asking you to win, right?"

"I'm not going to change my core values to go into this job," Corrigan said. "Am I going to need to operate a little bit differently? Sure, sure. . You'd be silly to not understand the operating conditions that you're operating under. But to stay within your core values, I think, makes it pretty easy."

It's certainly a different job than when Yow arrived in summer 2010 and N.C. State stood 89th in the Directors' Cup rankings of overall college sports programs. She set a goal of reaching top-25 status, and after years of climbing, the Wolfpack finished a school-record 15th last season. N.C. State ranked 26th for 2018-19 in results released Friday, and it's up to Corrigan to build on that growth.

"This is a credit to the situation I took over — there's really good coaches here," Corrigan said. "It's not a situation where you're going in and X-sport, Y-sport, Z-sport are all on the ropes — and you're looking at it going, 'Man, we've got to make a change.' . There's not a lot of things you're going to come in and say: 'Aha! I'm going to attack this. I hope it works.'"

Facilities are an early emphasis. The school is finishing a $6.6 million project to create broadcast and production space at football's Carter-Finley Stadium ahead of the August launch of the ACC's TV channel. Corrigan said the department is working on a master facility plan to examine needs across numerous sports, such as improving the baseball complex for a program that frequently hosts NCAA Tournament regional games.

"It's a pretty dynamic time around campus with building (projects) . and they need all kinds of different elements," Corrigan said. "And it doesn't make sense for us to be, in my opinion, on the sidelines saying, 'Don't touch this,' as opposed to being part of those discussions on a campus-wide standpoint to understand where our facilities are, the prioritization of the facilities and make sure we're all going in the right direction."

Another concern is what awaits men's basketball.

The staff of current coach Kevin Keatts, who replaced Gottfried in March 2017, isn't linked to the case. The school received a verbal notice of inquiry from the NCAA last fall signifying the start of an investigation. N.C. State previously said it remains in communication with the NCAA; Corrigan told the AP: "None of that's changed."

More broadly, don't expect Corrigan to implement rapid changes just to put his own immediate imprint on the department.

"It's not about me, it's about N.C. State," Corrigan said. "It's about the athletic department, right? If it's going in the right direction, my job is to enhance, not to say, 'All right, stop, move to the right and we're going to go in this direction.'"