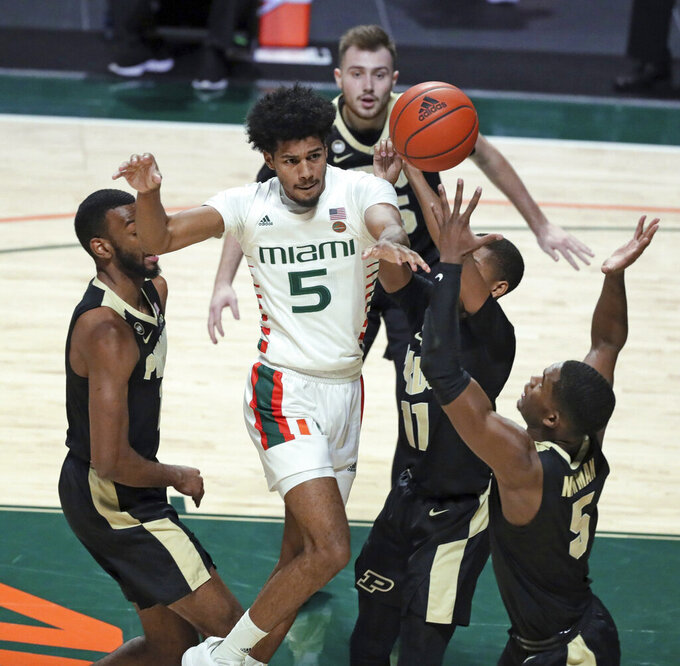 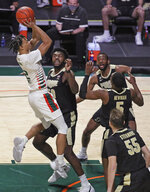 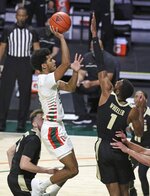 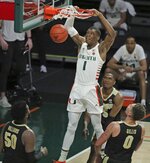 CORAL GABLES, Fla. (AP) — Kameron McGusty scored 15 of his 18 points in the second half, and Miami rallied from an 18-point halftime deficit to beat Purdue 58-54 on Tuesday night in the ACC/Big Ten Challenge.

Miami (3-0) closed the game on a 31-10 run — after being down by as many as 32-12 late in the first half — for the Hurricanes' largest halftime-comeback victory over the last 20 seasons, according to Elias Sports Bureau.

McGusty hit two free throws with 1:36 left to give Miami its first lead since 1-0. He added a three-point play on the Hurricanes’ next possession for a four-point advantage.

Miami was held to 14 points in the first half, tying the record for fewest in a half in a ACC/Big Ten Challenge game. But the Hurricanes made 11 of 12 two-point shots to start the second half, and McGusty sank Miami’s first 3-pointer, in 16 tries, with 4:59 remaining to get within 50-45.

Miami was without guard Chris Lykes after he injured his ankle against Stetson. Lykes is averaging 15.5 points per game.

Zach Edey, a 7-foot-4 freshman, scored 15 points for Purdue (3-2) despite fouling out with 3:11 left. Trevion Williams also fouled out with eight points and seven rebounds.

Brandon Newman scored Purdue's opening seven points during a 15-0 run to build a double-digit lead after the first four minutes of the game. The Boilermakers led 32-14 at the half after holding the Hurricanes to 5-of-22 (22.7%) shooting, including 0 of 10 from 3-point range.