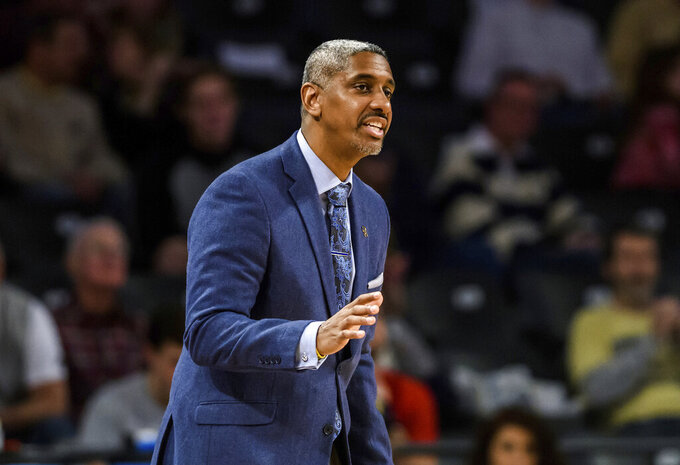 FILE - In this Saturday, Feb. 11, 2017, file photo, then-Georgia Tech assistant coach Darryl LaBarrie gestures during the first half of an NCAA basketball game against Boston College, in Atlanta. Georgia Tech's basketball team was banned from postseason play for the upcoming season and slapped with four years of probation for major recruiting violations committed by a former assistant coach and an ex-friend of head coach Josh Pastner. The NCAA says former assistant coach Darryl LaBarrie gave $300 to a highly touted prospect for a visit to an Atlanta strip club and arranged for him to meet with a former Georgia Tech athlete who played for the NBA's Atlanta Hawks, including a visit to the player's home and a free meal at a lounge owned by the player.(AP Photo/Danny Karnik, File)

ATLANTA (AP) — Georgia Tech coach Josh Pastner still has the support of his athletic director even after the Yellow Jackets basketball team was slapped with NCAA sanctions Thursday, including a ban on postseason play for upcoming season.

The sanctions handed down by the NCAA also included a reduction in scholarships, limits on recruiting and a fine of $5,000 plus 2% of the program's budget,

Pastner was not directly named in the NCAA's findings and was largely cleared in Georgia Tech's own investigation.

"We admonish Josh for his poor judgment" in allowing his former friend, Ron Bell, "to get close to the program in the first place," athletic director Todd Stansbury said.

That was the extent of any punishment for Pastner.

"I continue to support Josh as our men's basketball coach," Stansbury said.

While Georgia Tech is considering an appeal, the lead investigator said the penalties could have been more severe.

"Quite frankly, if you look at the penalties that were prescribed, they are ... in most cases at the lower level of level one standards," said Joel Maturi, the chief hearing officer for the NCAA's committee on infractions. "We're trying to be as fair and consistent as we can."

But Stansbury said some sanctions could unfairly impact current players. He expects a decision on a possible appeal within 10 days.

"I just think the breadth of the penalties as well as the length, in my opinion, are I feel more severe than I was anticipating," Stansbury said. "We are in the process of digesting the penalties to determine which ones may be subject to appeal."

The NCAA said former assistant coach Darryl LaBarrie gave $300 to a highly touted prospect for a visit to an Atlanta strip club and arranged for him to meet with a former Georgia Tech athlete who played for the NBA's Atlanta Hawks, including a visit to the player's home and a free meal at a lounge owned by the player.

The NBA player was not identified, but Jarrett Jack was on the Hawks' roster in 2016. He never played for Atlanta, which waived him during training camp as he struggled to return from a serious knee injury.

Maturi said the use of a strip club for recruiting purposes was disturbing.

"It goes without saying that we as a committee firmly believe that adult entertainment has no place in college sports," he said.

LaBarrie was given a three-year show-cause ban from coaching for failing to cooperate in the investigation. The NCAA said he denied any involvement during his first interview with the enforcement staff and also tried to get the prospect to lie about what happened. LaBarrie later acknowledged that he arranged the illegal benefits, the investigation found.

As for Bell, the NCAA found that Pastner repeatedly cautioned against providing any illegal benefits, though the coach allowed him to continue interacting with the program. Bell warned the three players to never tell Pastner about the gifts and benefits, according to the report.

The NCAA report also noted that Pastner reported the violations after they were revealed to him by Bell.

Georgia Tech has permanently cut ties with the booster.

The postseason ban seems largely symbolic, though it also includes the ACC Tournament. The Yellow Jackets haven't appeared in the NCAA Tournament since 2010 and made their last postseason appearance in 2017, during Pastner's first season at Georgia Tech. That squad won 21 games and reached the NIT final, but the Yellow Jackets slumped to records of 13-19 and 14-18 the last two years, including a 12-24 mark in the ACC.

The recruiting restrictions for each year of probation include:

— The loss of one scholarship.

— An eight-week ban on recruiting communications.

— A reduction of 19 recruiting-person days from the allowed number.

Some of the allegations were made public during the 2016-17 season, Pastner's first year at Georgia Tech. LaBarrie was placed on leave early that season and resigned in February 2017.

The NCAA ruled that Georgia Tech must also vacate all wins in which ineligible players were used. The school was given 14 days to provide that information to the governing body.

The allegations against Bell led to an exchange of lawsuits between Pastner and Bell and his girlfriend, Jennifer Pendley.

Pastner filed a defamation lawsuit against Bell and Pendley early in 2018, saying the Tucson-area couple was trying to defame and blackmail him by accusing him of breaking NCAA rules.

The countersuit from Bell and Pendley claimed Pastner sexually assaulted Pendley in February 2016 when he was head coach at Memphis.

Pastner denied the charges, saying there was "zero truth to any of those disgusting, bogus allegations."

The lawsuits were dropped this year. Bell and Pendley now face charges for trying to extort Pastner.

The NCAA sanctions against the men's team cap a tumultuous year for both basketball programs at Georgia Tech.

Longtime women's coach MaChelle Joseph was suspended late last season and then fired after the school said it learned of alleged mistreatment of players and staff, as well as possible NCAA violations. Joseph denied the allegations, saying she was punished for complaining about gender equity issues and was the victim of a double standard since Pastner was still on the job despite his well-documented troubles with the NCAA.