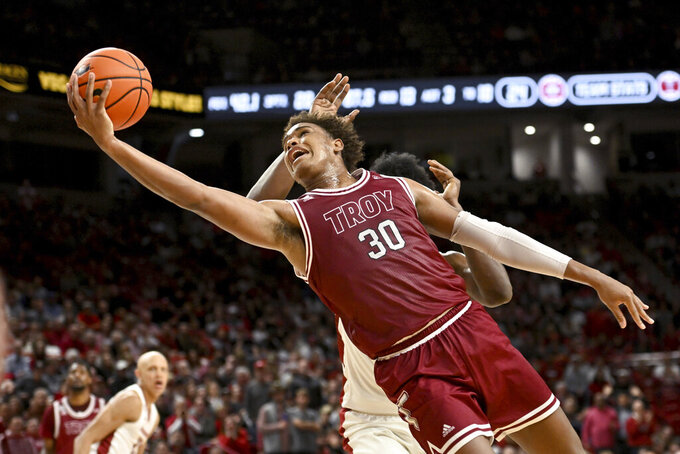 Troy forward Christian Turner drives past an Arkansas defender to score during the first half of an NCAA college basketball game, Monday, Nov. 28, 2022, in Fayetteville, Ark. (AP Photo/Michael Woods)

Council scored 13 of Arkansas’ final 19 points as the Razorbacks outscored Troy 19-3 in the final 6:25. The Trojans missed seven of eight during the stretch while Arkansas (6-1) made seven straight field goals.

Troy (6-2) made nine 3-pointers to maintain a lead for a bulk of the game, but went just 1 for its final 8 from deep. Arkansas countered in the paint, outscoring the Trojans 46-26.

Arkansas made just three 3-pointers, but Council made one from about four feet beyond the 3-point line during the run to give Arkansas a four-point lead.

“It was huge. I thought it took spirit away from Troy, where it was the breaking point from a spirit standpoint,” Musselman said.

Nelson Phillips led the Trojans with 22 points, 18 of which came from 3-pointers.

Arkansas freshman Nick Smith Jr. made his debut, checking in with 14:08 in the first half. Smith is a projected lottery pick in next year’s NBA Draft, but had missed Arkansas’ first six games because of a knee injury. He didn’t score, going 0 for 2 from the field in six minutes. He didn’t play in the second half. Musselman said after the game Smith was on a minutes restriction.

“He probably could have waited to put on the uniform until Saturday but he wants to be a great teammate and he wants to contribute,” Musselman said. “Game one is out of the way, which I think is a good thing. What he did tonight, it’s really, really hard.”

Arkansas announced a half-hour before tip that junior guard Devo Davis would be “taking some time away from basketball,” per a statement from coach Eric Musselman. No reason was given for Davis’ leave nor was a timetable for potential return mentioned.

Davis has been a three-year starter for the Razorbacks and averaged 8.5 points in 31 minutes a game this season.

Arkansas has just three guards in its rotation with the loss of Davis, who was the team’s secondary ball-hander behind Black, but Smith's improving help should alleviate Davis' absence.