Ayala scores 23 to push No. 10 Maryland past UConn 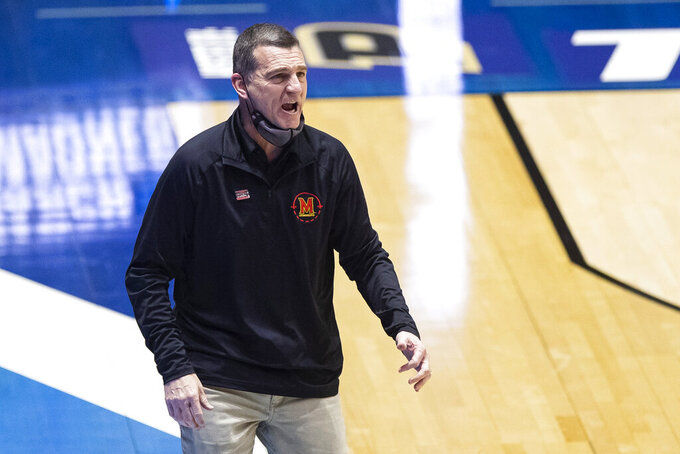 WEST LAFAYETTE, Ind. (AP) — Mark Turgeon has seen Maryland stifle its share of opponents this season but nothing like what his team did on a big stage.

Eric Ayala scored 23 points and the 10th-seeded Terrapins clamped down on defense to snag a 63-54 victory over No. 7 UConn in the first round of the NCAA Tournament on Saturday night.

Maryland held UConn to 32% shooting to overcome the Huskies' strong physical game. Maryland was outrebounded 40-29 — including a whopping 22-4 deficit offensively — but its defense carried the Terps to a second round matchup against No. 2 Alabama.

Asked if this was their best defensive effort this season, Turgeon simply noted the damage they prevented.

“We’ve had a lot of really good defensive efforts," he said. "I think where we were fortunate tonight was on those 18 offensive rebounds in the first half, they hardly had any second-chance points.”

On their end of the floor, the Terps made good on their chances.

Maryland (17-13) shot 51% for the game and converted 9 of 18 from behind the arc. The Terps built a 14-point cushion that UConn cut to 53-48 with 2:53 remaining. Ayala and Darryl Morsell each made a pair of three throws to push the lead back to nine.

Hakim Hart answered another small UConn (15-8) spurt with a jumper to make it a three-possession game, and a dunk against the press with 30 seconds left ignited a celebration on Maryland’s bench.

Ayala was 8 of 14 shooting, including 3 of 5 from deep, and was among three Terps with five rebounds. Aaron Wiggins had 14 points and Donta Scott 12 for Maryland.

“It’s do or die at this point,” said Ayala, who finished a point shy of his career high. "You’ve got to leave it all out there, empty the tank. I wasn’t ready to go home today.”

James Bouknight had 15 points and Jalen Gaffney 12 for the Huskies, who won five of their last six games to earn their first NCAA Tournament berth since 2016.

The Huskies have been through the firing of a coach, NCAA violations and a series of transfers since winning the 2014 national title. Dan Hurley was hired in 2017 to rebuild the program and UConn posted its first winning season in four years in 2020.

The Huskies head home feeling good about this season, but also knowing there's work ahead.

“This year was a huge success for us," Hurley said. "It doesn’t feel like it right now because you’re devastated with the way the evening went.

It was the first meeting between Maryland and UConn since Maryland won in the 2002 regional final en route to its only national championship. The Terps have reached the NCAA five of the past seven seasons — and would've made it last spring before the pandemic cancelled the tournament — and won their second consecutive opener.

UConn opened quickly and aggressively on the boards, snatching five in just over a minute before the last one ended with RJ Cole's 3-pointer for the first basket. That was one of the few times the Huskies got second-chance baskets.

“They were able to double down in the post and front the post,” UConn senior forward Isaiah Whaley said. "And we missed a lot of shots that they were able to get the rebound off our missed shots. They’re real physical, a tough team as well.”

The Terrapins had been shooting 46% headed into the game to show the team was more than just a defensive juggernaut. Their consistency in both halves was notable and critical with baskets that stalled UConn’s momentum.

The Huskies were aggressive throughout and beat the Terrapins for rebounds and 50/50 balls. But the shots didn't fall, in large part due to Maryland’s success in altering some of those looks. Morsell, the Big Ten defensive player of the year, had seven points and seven rebounds before fouling out late.

Maryland plays Alabama (25-6) in the second round.