With big act to follow, Valentine takes over at Loyola 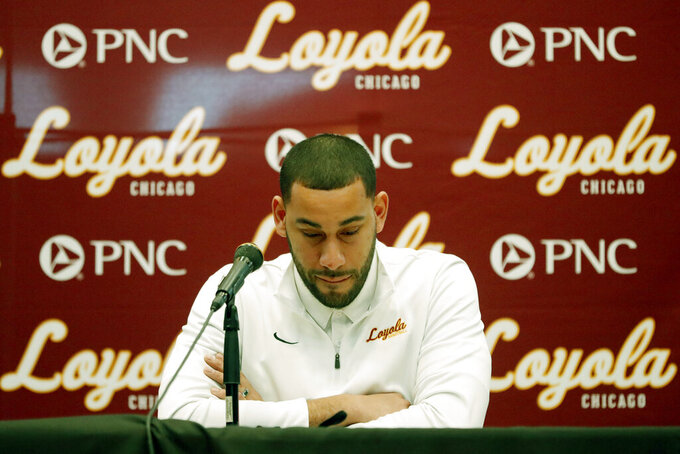 CHICAGO (AP) — Drew Valentine was on FaceTime with a recruit when he noticed a familiar figure walk by on Monday.

Porter Moser stopped in to grab some things and bid farewell as he leaves Loyola Chicago for Oklahoma. He also had some advice for Valentine, the Ramblers' new head coach.

“The last thing he said to me is make sure you do it your way,” Valentine said Tuesday. “Make sure you do it with confidence and conviction. That's what I'm gonna do. There's so many situations that present themselves in a college basketball season. ... I have confidence that I can handle all those situations."

Valentine has quite an act to follow after Moser led the Ramblers to national prominence over the past decade. They made the Final Four in 2018 in a run that turned a 98-year-old nun and team chaplain named Sister Jean Dolores Schmidt into a celebrity. And they advanced to the Sweet 16 this year in their return to the NCAA Tournament, with Sister Jean in attendance at age 101.

It's a big opportunity for a 29-year-old in his first head coaching job. But he played a big role in helping Loyola rise to national prominence the past four years as an assistant.

Before that, he played at Oakland, spent time as a graduate assistant under Tom Izzo at Michigan State and served as an assistant at his alma mater from 2015 to 2017.

He crossed paths and developed a friendship with former Loyola assistant Bryan Mullins — now the head coach at Southern Illinois — on the recruiting trail. That led to him joining Moser's staff and, ultimately, this position.

Valentine said he has spoken to star seniors Cameron Krutwig and Lucas Williamson about returning next season. He would “love” to have them back.

He said he also spoke to Izzo — who took over for Jud Heathcote — the past few days about replacing a successful coach.

“And I've also talked to him about what it's like doing that as a first time head coach,” Valentine said.

One person he hadn't talked to as of late Tuesday morning: Sister Jean. But athletic director Steve Watson did on Saturday.

“She gave us the blessing,” he said.

Valentine was a de-facto defensive coordinator the past two years. And when it came to giving up points, the Ramblers were the stingiest in the nation this past season.

It's not difficult to see why, despite his age, Watson saw Valentine as the obvious choice to lead the program. Moser had raved about him for years, and Loyola feared losing him for an assistant spot or head coaching job at another school.

Watson spoke to Valentine right after Moser informed the AD he was going to Oklahoma. They immediately notified the team, then decided to wait until Monday to announce Valentine's promotion.

“Porter and I talked about getting him ready for a head coaching job,” Watson said. “And Porter's great with that. ... It's something that he and I worked together on and talked about quite a bit.”

Valentine choked up during the news conference as he talked about his mom Kathy and dad Carlton — who were on hand — and younger brother Denzel as well as his wife and daughter, who is due to be born in July.

Carlton Valentine played for Morgan Wooten at DeMatha Catholic in Hyattsville, Maryland, and for Jud Heathcote at Michigan State in the 1980s. He became a successful high school coach in Michigan, with both his sons playing for him. Denzel is a guard for the Chicago Bulls, and now, Drew is coaching a Division I program in the city.

“To their credit, both Drew and Denzel have been good people," Carlton Valentine said. “Good stuff happens to good people. They just work hard, they keep their head down. They're respectful to people and they try to learn as much as they can.”