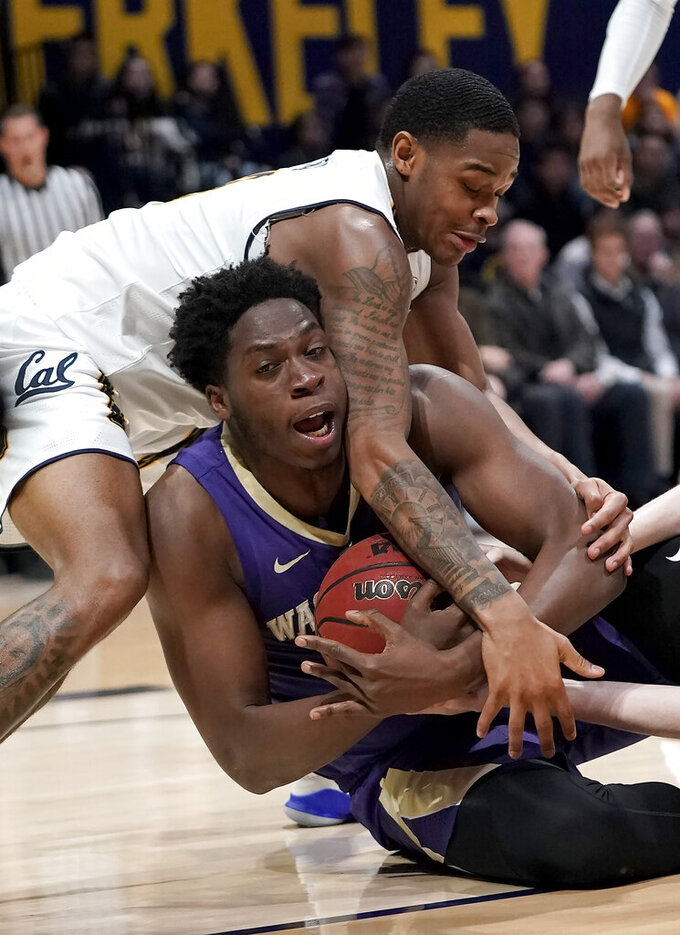 Washington forward Noah Dickerson, bottom, and California guard Paris Austin (3) try to get control of the ball during the first half of an NCAA college basketball game Thursday, Feb. 28, 2019, in Berkeley, Calif. (AP Photo/Tony Avelar) 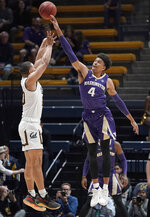 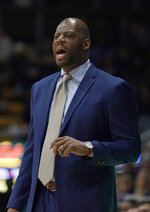 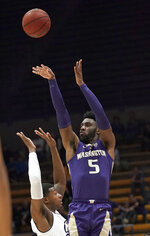 BERKELEY, Calif. (AP) — In a season full of disappointment, California found something to celebrate.

Darius McNeill scored 19 points and Connor Vanover added 18 to help the Golden Bears snap a 23-game losing streak in Pac-12 play and win for the first time at all in 2019 by beating No. 25 Washington 76-73 on Thursday night.

"I just say it's about time," forward Justice Sueing said. "We've been on a rough stretch for a minute now, all of 2019 pretty much. The most important thing is the guys all decided we were going to stay together and not let the losses interfere with our relationship and how hard we play. It brought us the goods."

This was by far the biggest win in coach Wyking Jones' two years at Cal, giving him a locker room celebration in a season where he has faced calls to lose his job.

"I'm soaking wet because they doused me with water," Jones said. "We had a good time in there celebrating the win. I'm so happy for the guys because they've gone through this losing streak and we've all stayed positive and continued to scratch and fight and claw. We've gotten close a lot, but to get a win tonight against a really good team means a lot for us."

The Huskies (22-6, 13-2) had won 15 of 16 games coming into this matchup and still ended up earning the outright regular-season conference title when both Oregon State and Arizona State lost.

David Crisp scored 32 points to lead Washington, but missed a potential game-tying 3-pointer at the buzzer to set off a rare celebration at Haas Pavilion.

The Bears built a 67-60 lead midway through the half on a 3-pointer by Sueing that forced Washington to take a timeout. But the Huskies rallied from there and tied the game at 71 with less than five minutes to play when Nowell hit a 3-pointer and a fastbreak layup on successive possessions.

With the Huskies trailing by one in the final minute, Sueing blocked a layup by Nowell and Cal came up with the loose ball. Paris Austin made two free throws with 23.8 seconds to play to put the Bears up 76-73.

Dominic Green then missed a 3-pointer for Washington, but the Huskies got another chance when McNeill missed the front end of a one-and-one.

But Nowell and Crisp missed 3s in the final 6 seconds to give Cal the win.

Despite the big disparity in the standings between the teams, Cal managed to keep up with Washington at the start. The Bears went on a 13-2 run late in the first half to take a 42-34 lead capped by back-to-back baskets from Vanover.

But Crisp ended that spurt with a 3-pointer and added another off-balance shot from long range just before the buzzer to give him 21 points in the half and cut Cal's lead to 45-44.

Washington: The Huskies are usually stout on defense and had allowed just 100 points total the past two games. But they struggled to slow a Cal team that has struggled to score all season and had just 52 points total in a loss at Washington in January. Coach Mike Hopkins lit into his team during two timeouts in the first half for their lackadaisical defense and the Huskies were unable to overcome that.

California: The Bears led at the half for the fourth time in the past eight games, but this time held on for the win. They had been outscored by 37 points after halftime in those previous three games. They trailed the Huskies just 29-28 at halftime on Jan. 19 in Seattle before losing 71-52. But they put together a complete effort this time.