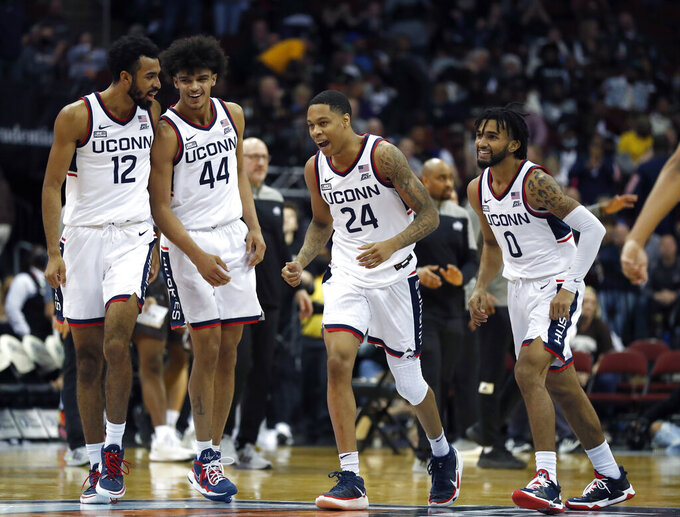 NEWARK, N.J. (AP) — R.J. Cole scored 15 points and No. 15 Connecticut surged midway through the second half to beat St. Bonaventure 74-64 on Saturday.

“I just had to step it up. Coach has been hard on me at practice. Told me to raise my intensity,” Akok said. “So just going out and playing hard and proving why you should be on the court."

“They go on a 13-0 run, that’s not good, I guess," Bonnies coach Mark Schmidt said with a chuckle.

The Bonnies cut the deficit to five on two occasions, including on Osun Osunniyi's layup to make it 64-59 with just under two minutes to play.

Jaren Holmes had 17 points, eight rebounds, and five assists for the Bonnies and Dominick Welch had 15 points and seven rebounds.

“We didn’t come here to give UConn a game. We came here to win,” Schmidt said. “We played to win, and we just came up short.”

Tyler Polley added 13 points off the bench for UConn.

“The defense was there and then the production on offense was there across the board. Everyone gave us something,” coach Danny Hurley said. “If we’re going to get that type of production, especially with two high-level dudes out with our defense and how hard we play, we’re hard to beat.”

After a close loss at West Virginia, UConn should stay around where it is. Meantime, St. Bonaventure, which started the year in the Top 25, won’t make it back after receiving votes last week.

Both teams were without top players.

St. Bonaventure's Kyle Lofton (17.4 points per game) is still recovering from an ankle sprain. The senior point guard has started 93 game in his career has dished out 41 percent of the team’s assists over the last three seasons.

UConn was without two starters, leading scorer Adama Sanogo (15.6 ppg) has an abdominal injury and guard Tyrese Martin (12.9 ppg) remains sidelined with an avulsion fracture of his left wrist.

St. Bonaventure: Starting the season in the Top 25, the Bonnies have looked like a favorite to win the A-10. They still do, even without Lofton, who will only make things better upon his return.

UConn: Fourth-year coach Danny Hurley is expected to take the Huskies to the next level this year as he leads the storied program back to prominence. It’s a long way until March, but UConn looks the part of one of the top teams in the Big East and making noise again nationally as conference play is set to begin.

The game was part of the Never Forget Tribute Classic at the Prudential Center in Newark, raising money for a 9/11-related charity. It was the second game of a doubleheader. In the opener, the No. 3 UConn women defeated UCLA 71-61.

St. Bonaventure: Play Virginia Tech in the Basketball Hall of Fame Shootout in Charlotte on Friday.