Davis begins process of putting own touches on UNC program 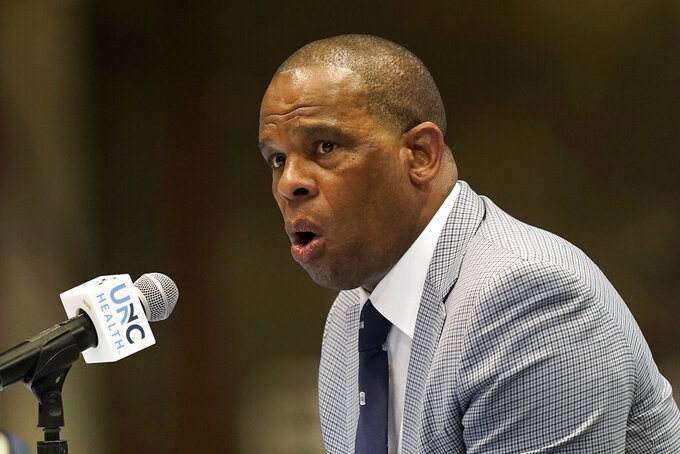 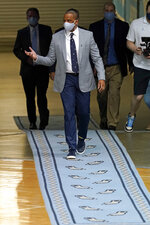 CHAPEL HILL, N.C. (AP) — Hubert Davis understands the challenge ahead of him in taking over at North Carolina.

It’s up to him to put his own touches on the program, even as he promises to follow the foundation set by Williams and the late Dean Smith from Davis’ playing days with the Tar Heels.

“I don’t feel pressure because I’m not comparing myself to anybody,” Davis said. “Coach Williams is the greatest. I’m Hubert.”

Davis held his introductory news conference Tuesday on the Smith Center court bearing the name of his mentor, who announced his retirement here five days earlier. Officially hired Monday, Davis was emotional and at times choked up describing the feelings of taking over the program where he has deep ties, down to meeting his wife while in college here.

The 50-year-old Davis is the nephew of former UNC great and NBA all-star Walter Davis — “Uncle Walt," as he referred to him Tuesday. He was once an unheralded recruit who persuaded Smith to take a chance on him, then ended up playing a major role under Smith and longtime assistant Bill Guthridge before going on to be a first-round NBA draft pick with a 12-year league career.

Davis had also spent the past nine seasons as an assistant to Williams, and his duties have included coaching UNC’s junior varsity program — something Williams did as an assistant under Smith before his first head-coaching job at Kansas.

Williams persuaded Davis to leave his career as an ESPN college basketball analyst to join the staff in 2012. He was sitting on the front row at Tuesday’s news conference and wiped away tears a few times during emotional moments for Davis.

Davis offered no specifics when asked what he might tweak with offensive or defensive schemes, though Williams has long preferred a push-the-tempo pace with strong point guard play as well as an emphasis on rebounding through a preferred style with two post men.

“The foundation is set here at Carolina, and it’s a foundation I believe in,” Davis said.

Yet Davis did offer at least one specific plan: re-recruit 7-footer Walker Kessler after the five-star freshman made a surprise transfer announcement following the first-round NCAA Tournament loss to Wisconsin in Williams' final game. Davis said he had reached out via text message Monday and the two were scheduled to speak by phone later Tuesday.

“I want Walker here. He’s a Carolina guy,” Davis said. "I’ve enjoyed being one of his coaches last year. ... He needs to come back here and this is the right place for him. We would love to have Walker Kessler and his family back in Chapel Hill and back at UNC.”

Davis — the program's first-ever Black head coach — also said he planned to return a phone call from former Smith player Charlie Scott, the school's first Black scholarship athlete who went on to play in the NBA.

Williams told reporters afterward that he is “as happy as I’ve ever been” that Davis was his successor, while the school released a video statement from Williams telling Davis he would “love” sitting in the head coach’s seat.

“I will be here cheering,” Williams said. “I won’t ever criticize you. I’ll blame it on the officials.”