Davis scores 27 as No. 8 Wisconsin holds off Northwestern 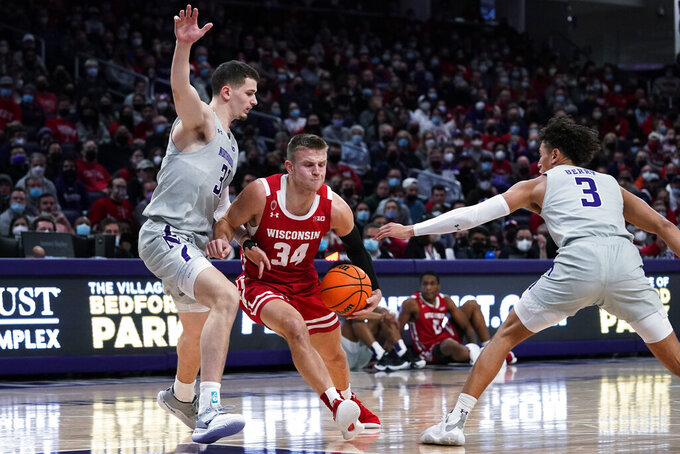 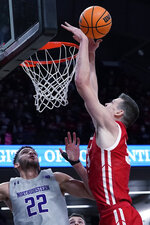 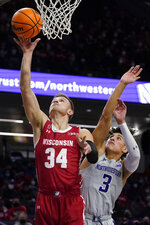 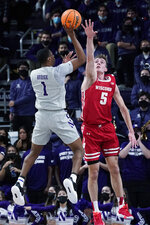 EVANSTON, Ill. (AP) — Johnny Davis is getting used to all the attention. All the pushing, grabbing and bumping by opponents.

He just keeps rolling along.

Davis scored 27 points, and No. 8 Wisconsin beat Northwestern 82-76 on Tuesday night for its seventh straight win.

“I think I did a good job of not letting all the bumps and bruises get to me,” Davis said. “I thought I did a really good job of keeping my composure, and so did our team.”

Davis went 4 for 5 from 3-point range and grabbed eight rebounds. The 6-foot-5 guard is averaging 22.1 points, moving into contention for college basketball's biggest awards after he averaged 7.0 points per game last season as a freshman.

“He's just a special talent, and he's got good teammates around him that find him and put him in good position,” coach Greg Gard said.

Freshman Chucky Hepburn scored 14 points for the Badgers, including a 60-foot heave at the halftime buzzer. Tyler Wahl had 14 points and 11 rebounds, and Brad Davison finished with 13.

Northwestern was unable to build on its 64-62 win at Michigan State on Saturday, losing for the fifth time in six games. Chase Audige scored 23 points for the Wildcats (9-7, 2-5), and Boo Buie had 19.

“We had this game a few times,” Audige said. “It was just a few key plays and stuff like that, but we're going to keep fighting.”

Audige's driving layup trimmed Wisconsin's lead to three in the final seconds in the first half, but Hepburn's long-range bank shot as time expired made it 41-35 at the break.

“It felt good, but I honestly didn't think it was going to go in,” Hepburn said. “It was just one of those ones, you pray it goes in.”

The Badgers carried the momentum into the second half. Layups for Wahl and Steven Crowl made it 47-37 with 18:26 left.

The Wildcats pulled within four on Buie's 3-pointer with 48 seconds left. Davis then missed two foul shots, but Pete Nance missed a wild shot for Northwestern at the other end.

Wahl made two foul shots to help Wisconsin hold on in the final seconds.

Crowl finished with 10 points in the Badgers' seventh straight win in the series against the Wildcats.

Ryan Young had 13 points for Northwestern. Nance finished with 10 points, six rebounds and five assists after he missed the victory over the Spartans with an ankle injury.

Wisconsin: Typical Wisconsin team, only with a little more scoring punch. The Badgers have scored at least 70 points in every game during their win streak. Davis is silky smooth, and he delivered at a couple key moments down the stretch.

Northwestern: The Wildcats went just 3 for 8 at the foul line, compared to 17 for 26 for the Badgers. They played hard all the way to the end, but they just weren't able to run down a deeper Wisconsin team.