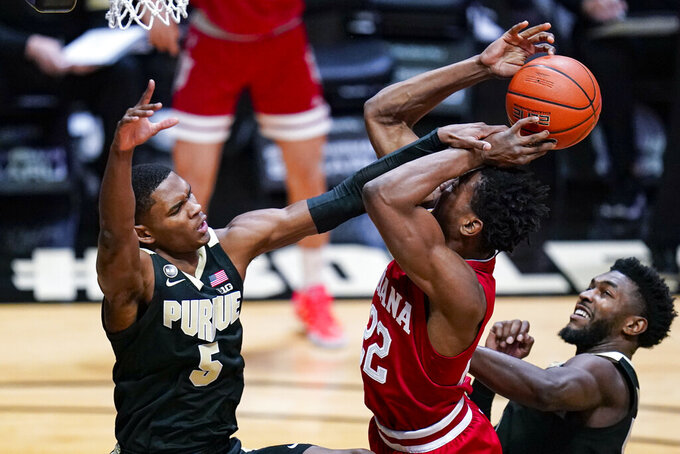 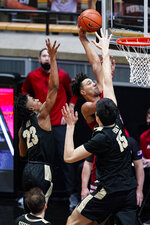 WEST LAFAYETTE, Ind. (AP) — Zach Edey got a crash course in the Indiana-Purdue rivalry when he was held scoreless in January.

Less than two months after going 0 for 4 against the Hoosiers, Edey scored 20 points, grabbed nine rebounds and led No. 23 Purdue to a milestone 67-58 victory over the Hoosiers.

Just four days the former baseball pitcher scored a career-high 21 points, he went 8 of 10 from the field and scored 12 of Purdue's last 20 points.

The Boilermakers (18-8, 13-6 Big Ten) now head into next week's conference tournament with five straight wins, a top-four seed and a double-bye.

Aljami Durham had 14 points and Trayce Jackson-Davis finished with 12 points and five rebounds to lead the Hoosiers (12-14, 7-12), who have lost five in a row. They finished conference play with a fifth consecutive season with a non-winning reecord — the first time that has happened since 1911-19.

“It’s been a rough five games. We’ve just got to recharge our batteries," Jackson-Davis said. “We've just got to put the past behind us and just keep pushing forward.”

This one looked awfully familiar, too, as the Hoosiers went 5 of 23 on 3-pointers and had several long scoreless stretches.

Yet Indiana still managed to hang around.

It quickly cut a 29-20 deficit to 35-31 early in the second half before the Boilermakers answered with eight straight points. When the Hoosiers charged back, getting within 47-42 with 6:29 to go, Purdue countered with an 8-3 burst to make it 45-35.

Indiana was still down six with less than a minute to go, but the Boilermakers closed it out at the free-throw line and with a big helping hand from Edey.

Indiana: Just a couple of weeks ago, the bracketologists had the Hoosiers pegged for an NCAA Tournament bid. Their late-season swoon certainly put those hopes in jeopardy, and now they may need to win their first Big Ten Tournament title to make it.

Purdue: The Boilermakers head into next week's league tourney as perhaps the league's hottest team and a real threat to win the title in Indianapolis. Not only are they playing well, they are 14-1 in Indiana — and won't leave the state again this season.

Purdue: Jaden Ivey had 17 points. ... Trevion Williams finished with six points and seven rebounds while Aaron Wheeler added eight points and seven rebounds. ... Sasha Stefanovic made two 3s and had eight points. ... The Boilermakers won despite going 6 of 21 on 3s and having 15 turnovers. ... Purdue has held 15 consecutive opponents to 72 points or fewer.

While only a few dozen were inside Mackey Arena and its cardboard cutouts, hundreds enjoyed the rivalry from across the street at Ross-Ade Stadium. They took advantage of the unseasonably warm, sunny day by sitting on blankets inside and watching the game on the football stadium's video board.

Indiana: Must wait for the Big Ten Tournament bracket to learn next week's opponent at Lucas Oil Stadium.

Purdue: Won't play until Friday against a yet-to-be determined foe.