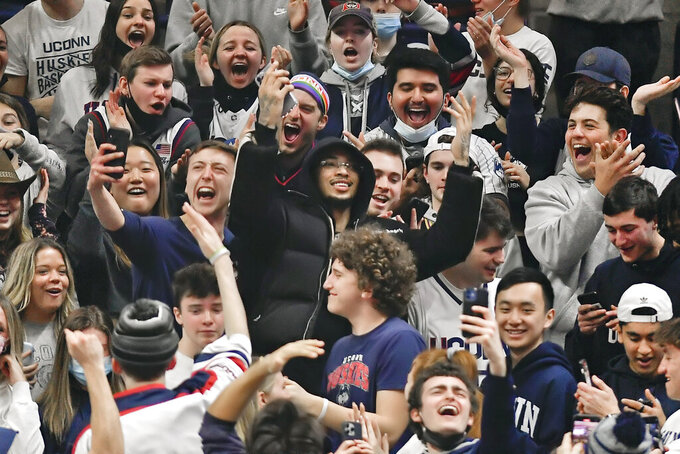 Former Connecticut player and current Charlotte Hornets guard James Bouknight, center, hides in the student section after being ejected from his courtside seats by an official in the second half of an NCAA college basketball game against Xavier, Saturday, Feb. 19, 2022, in Storrs, Conn. (AP Photo/Jessica Hill) 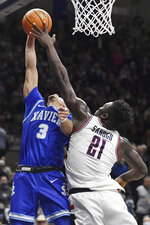 STORRS, Conn. (AP) — Former UConn star James Bouknight of the Charlotte Hornets was tossed from his courtside side by a game official in the second half Saturday as the No. 24 Huskies held off Xavier 72-61.

Bouknight, who played two seasons for Connecticut and is in his NBA rookie season, was sitting in the front row opposite the Xavier bench when he was asked to leave.

Bouknight then moved over to the UConn student section.

“That was not an ideal scenario, because we were playing bad and kind of melting down a bit,” UConn coach Dan Hurley said. “He got tossed. I didn’t really see what happened. And then I saw him again somewhere near the student section.”

R.J. Cole and Tyler Polley each scored 16 points for UConn (19-7, 10-5 Big East), which has won four of its last five games. Adama Sanogo had 15 points and nine rebounds.

Playing before a raucous, sold-out crowd for the second straight game, the Huskies hit 52% of their shots and took a 17-point lead at halftime.

That UConn advantage unraveled quickly at the start of the second half as the Huskies struggled with turnovers under some heavy pressure. UConn turned the ball over 10 times in the opening seven minutes of the second half, watching Xavier pull within 49-43.

“We let our guard down a little bit and just were too casual, too weak,” Hurley said.

Xavier had scored 10 straight points before Cole’s 3-pointer with 12 minutes to play ended the spurt. The Musketeers eventually got within four before Cole scored on a pair of drives to the basket that extended his team’s edge back to 10 with just under two minutes to go.

UConn is 7-0 this season in Gampel Pavilion, its on-campus arena.

Xavier won the first meeting between the teams 74-68 just nine days earlier. In that game, the Musketeers had a 35-31 edge in rebounding.

The Huskies were much better in that category in the rematch, pulling down 42 rebounds to Xavier’s 26. Senior Tyrese Martin led UConn with 11 boards.

“Obviously we were able to outrebound them at our place," Xavier coach Travis Steele said. “I’m sure they (UConn players) have heard that narrative or that stat several times over the last few days. And they got us on the glass. They’re the No. 2 offensive rebounding team in the country for a reason. They’re big, they’re strong, they’re athletic, they’re physical. I thought they set that tone early.”

UConn missed its first five shots in the game and went scoreless for over three minutes. The Huskies used an 18-5 run to take a 44-27 lead at the break.

UConn inducted Harrison “Honey” Fitch into its Huskies of Honor on Saturday, recognizing the first Black basketball player in the program’s history.

Fitch, who played at UConn from 1932-34 when it was known as Connecticut State College, had his jersey join the likes of Ray Allen, Kemba Walker, Jim Calhoun, Rebecca Lobo, and Diana Taurasi on the wall inside Gampel Pavilion during a halftime ceremony.

The Huskies of Honor program, which is the school’s version of a hall of fame, was started in 2006.

Fitch died in 1984 but his son, Harrison “Brooks” Fitch Jr. was on hand Saturday.

“We’re very proud as a family. We’re proud, pleased, honored, and humbled with this honor,” said Brooks Fitch, a 1964 graduate of UConn.

Honey Fitch was forced to deal with a great deal of racism during his college days, perhaps none more significant than when the Coast Guard Academy refused to play against Connecticut State College Jan. 27, 1934, because it featured a Black player.

“Going back to an incident that happened in 1934, racist incident, at that time UConn stepped up in a big way,” Fitch said. “And also that’s what’s happening in 2022. This level of recognition is very, very significant.”

Xavier played rather well and rallied to make things close, but still has dropped four of its last five games. They’re still in reasonably good shape to make the NCAA Tournament but obviously need more wins to be sure.

With three wins since Sunday, UConn is likely to move up a few spots from its current perch.

UConn: Forward Akok Akok missed his sixth straight game with a foot injury, though the junior did go through warmups with his teammates Saturday.

Xavier: Plays at No. 8 Providence on Wednesday.

UConn: Hosts No. 10 Villanova on Tuesday in Hartford.