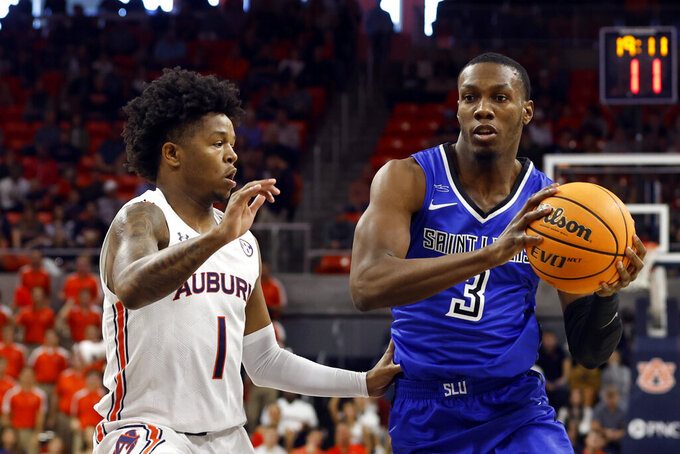 Saint Louis guard Javonte Perkins (3) drives to the basket around Auburn guard Wendell Green Jr. (1) during the first half of an NCAA college basketball game Sunday, Nov. 27, 2022, in Auburn, Ala. (AP Photo/Butch Dill)

Green scored 22 points and No. 13 Auburn reeled off 11 straight in the closing minutes for a 65-60 victory over Saint Louis on Sunday.

The Tigers (7-0) rallied from a five-point deficit over the final five minutes, starting with back-to-back drives by Johnson and ending with Green's scoop shot in traffic. He thrived in a showdown with Saint Louis star point guard Yuri Collins.

“Is it any coincidence that Yuri Collins is one of the top five point guards in the country? Wendell keeps score.”

Green had 15 points and eight assists in last year's meeting, when Auburn rallied from a 13-point second-half deficit to win 74-70.

The Billikens (5-2) missed six straight shots before Collins' drive with 20 seconds left. Then Jaylin Williams turned it over with an errant inbounds pass.

But Gibson Jimerson missed a long jumper for Saint Louis and Green went 1 for 2 at the line.

Auburn closed the game on a 12-2 run and held Saint Louis to 24 points below its season scoring average.

Green rebounded from a 1-of-9, two-point struggle against Northwestern in the Cancun Challenge to score 14 in the first half.

“Last year I went through a rough stretch at the end, it was like four or five games,” Greene said. “I told myself I can’t let that happen if I really want to be as good as I say.”

Javon Pickett led Saint Louis with 16 points before fouling out in the final seconds. Jimerson scored 12, going 4 for 9 from 3-point range. Collins, who is leading the nation in assists for the second straight season, had 10 points and nine assists.

Collins found Francis Okoro for an uncontested dunk to give Saint Louis its biggest lead at 58-53 with 4:43 to play. Then Auburn took over shortly after Johnson returned to the game.

His drive broke a nearly five-minute field goal drought for the Tigers, who had been in a 2-of-13 shooting funk. Johnson's long pass to Allen Flanigan for a one-handed dunk got the lead back for Auburn with 1:57 to play.

“They had 5-9 guys going in there and laying it in on us against our biggest guys.”

Saint Louis: The Billikens hung in throughout their first true road game of the season. Their only previous loss was to current No. 23 Maryland.

Auburn: The Tigers have won 43 consecutive nonconference home games and 23 straight at Neville Arena overall. They had 11 blocked shots.

“I don’t know how many two-shot fouls we missed both of them,” Ford said. “A lot, obviously.”