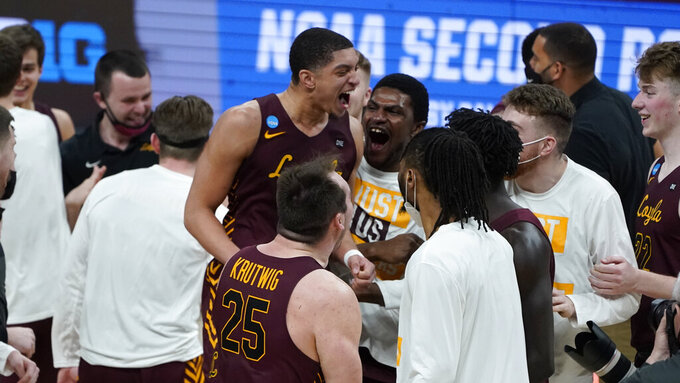 CHICAGO (AP) — From a makeshift recording booth in a closet in his room, surrounded by hanging shirts and Nike boxes stacked high on a shelf, Lucas Williamson stands in front of a microphone. There’s a laptop off to the side.

A picture shows him wearing headphones and reading a voiceover from a script in his left hand.

The Loyola Chicago senior guard has found his voice.

Williamson is an important part of “The Loyola Project,” an upcoming documentary about the Ramblers’ barrier-breaking 1963 team that pushed through racism and threats to win the NCAA championship. He is contributing as a narrator and writer.

“With Lucas, he’s our storyteller," filmmaker Patrick Creadon said. “We just felt that his very unique perspective is going to be important to understanding the story better. It’s not really much more complicated than that. We wanted this movie to have a variety of perspectives, and Lucas has added so much insight throughout the story that we just would not have had otherwise."

Williamson is trying to help script another story with the eighth-seeded Ramblers back in the NCAA Tournament for the first time since the 2018 team's unexpected Final Four run. They're in the Sweet 16 again, set to meet Oregon State in Indianapolis on Saturday after knocking out Georgia Tech and suffocating top-seeded Illinois.

Williamson is one of only two contributors remaining from the Final Four team along with star center Cameron Krutwig. And he sure has come a long way since that big run his freshman year — and not just on the court.

He's not afraid to share his thoughts, whether he's penning an op-ed about racial injustice for the student newspaper or giving his input for the documentary about topics that hit home for Loyola — and for the Chicago native.

“It's more so me talking about topics that I feel are just, like human rights,” he said. “I feel like you can't really have a debate when you're talking about human rights. It's either right or it's wrong. I kind of just talk about how I feel. In terms of the ‘63 team and working with that documentary, I’ve learned so much. I've learned so much about how much of a blessing it is that I can just focus on basketball and nothing else.”

With four black starters, the 1963 team won what remains the only NCAA title for an Illinois school. But what the Ramblers endured and the trail they blazed made it a landmark for civil rights.

From the insults and even pennies hurled their way by a particularly hostile crowd in Houston late in the season to the the death threats mailed to their dorm prior to a Sweet 16 matchup with all-white Mississippi State that became known as the Game of Change, it wasn't easy. Loyola went on to beat Cincinnati in overtime for the championship.

Creadon and his wife, Christine O'Malley, are from Chicago and had a “natural attraction” to do a story about the 1963 team. They were also behind successful documentaries such as “Wordplay,” about New York Times crossword puzzle editor Will Shortz, and the ESPN 30 for 30 film “Catholics vs. Convicts” chronicling the 1988 Miami-Notre Dame game. So when Loyola boosters approached them not long after the 2018 Final Four, it made sense. Shooting started in fall 2019.

Creadon and O'Malley set out to produce a more traditional, historical account of what the 1963 team endured. But as the George Floyd and Breonna Taylor killings and Black Lives Matter protests unfolded, they switched gears.

They decided they needed a fresh perspective. And they thought Williamson — a young black man from Chicago, a Loyola player and a journalism major whose father is a TV news cameraman — could offer one.

“There’s like a weird time warp thing that’s happening because Lucas is almost living a life that they were living." Creadon said. "But it’s in a different era. And that’s really fascinating. That’s just interesting.”

Williamson was already onboard as a narrator. But now, they were telling the story through his perspective, connecting the past and present.

“They call it March Madness for a reason,” he says to open the introduction.

Clips showing the buzzer-beating shots during the 2018 tournament, celebrations, rallies on campus, interviews with members of the 1963 team and highlights from that season are all woven together with his narration during the three-minute intro.

“We were told that the 1963 team changed the game forever,” Williamson says near the end. “But what about beyond basketball? Did the victories they racked up as a team make a difference in their own lives? And what did they discover half a century ago that speaks to our world today?”

Creadon said he is grateful Williamson wanted to participate.

“He’s so enthusiastic and he loves doing this,” he said. "He loves being a part of it, he loves telling stories.”

One of the highlights during production was a 2 1/2-hour Zoom call Creadon organized between the 2018 and 1963 teams. He wanted a more informal setting where they could get to know each other better.

“The Zoom call, they were shocked at what we went through despite all these years,” said Jerry Harkness, a consensus All-American on the 1963 team. “I guess it just didn't hit them, and I can understand that. Until you're told about it and talk about it, you don't realize that."

Harkness is “very curious” to see the documentary. And he sees Williamson as the perfect voice, the bridge connecting the past and present.

“He's narrating the now, and he's learning about the then,” said Harkness, a longtime sportscaster. “How many opportunities do you get to do that?”