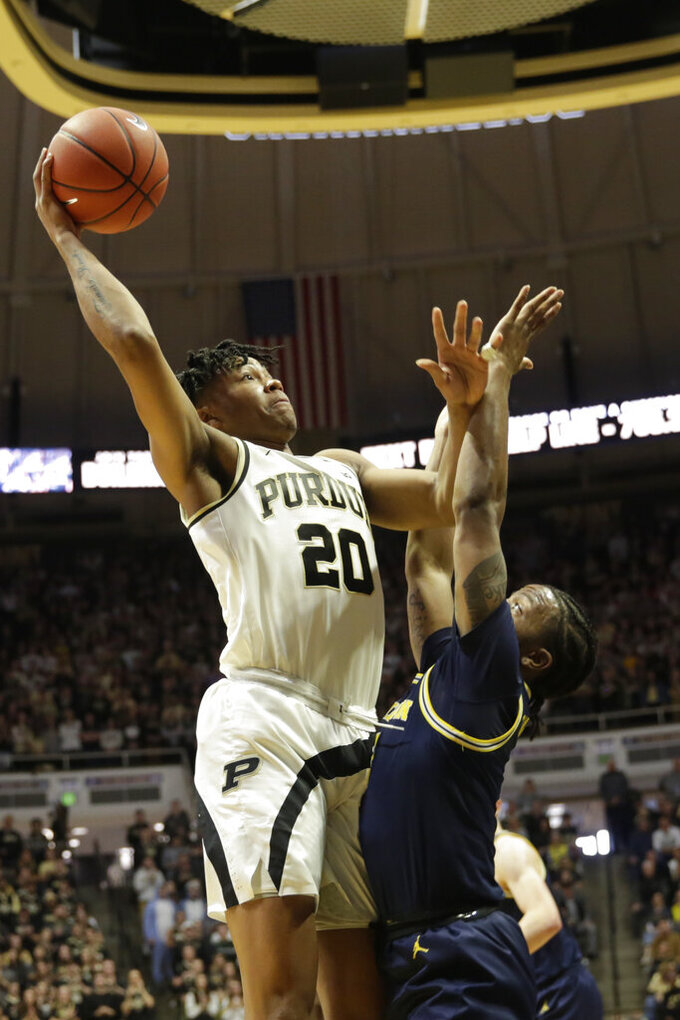 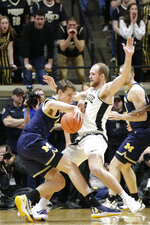 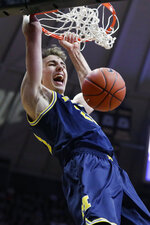 Everybody else struggled to find their shooting touch.

Wagner scored a season-high 22 points and Isaiah Livers added 19 to help the Wolverines earn their fifth straight victory, 71-63 at Purdue.

“My shot was falling finally," Wagner said. “I’ve been working hard in practice and I’m taking shots that I’m comfortable taking and taking them with confidence. That’s what this staff wants from us."

Neither team produced a shooting percentage over 40 and Wagner, who was 9 of 13 from the field, was one of only two players to make more shots than he missed.

The other was Sasha Stefanovic, who had 13 points for Purdue on 3-of-5 shooting.

How ugly were the numbers?

Michigan guard Zavier Simpson missed all 10 of his field-goal attempts while going 4 of 8 from the free-throw line. Trevion Williams, meanwhile, led the Boilermakers with 18 points with an 8-of-21 shooting performance.

The difference was Wagner's ability to repeatedly get to the basket, spin away from defenders and knock down 3-pointers. He was just good enough to give the Wolverines (18-9, 9-7 Big Ten) their fourth consecutive road win in league play and their first win at Mackey Arena since 2014.

“We do a better job staying connected (on defense), especially on the road, talking every possession," Wagner said.

For the Boilermakers, it's been a rough run.

Purdue (14-14, 7-10) has lost four straight including back-to-back home losses for the first time in six years — and it came on a day former coach Gene Keady and dozens of former players returned for alumni day.

But instead of playing with its usual grit, Purdue never really made it close.

Michigan took control with a 9-0 run midway through the first half then closed out the half on a 15-4 run that made it 36-21.

“I think that's the difference in the game — the last four minutes of the first half," Purdue coach Matt Painter said. “We never got that back.”

Michigan: Coach Juwan Howard has the Wolverines heating up at just the right time. Not only are they winning games, they're winning on the road in a conference where home-court advantage has been a huge factor all season. With four games left, Michigan could use its momentum to make another deep postseason run.

Purdue: The Boilermakers' NCAA Tournament hopes took another significant hit Saturday, and it was again largely because of Purdue's inconsistent offense. They scored 15 points in the first 15 minutes, shot just 28% from the field in the first half. Time is running out for Purdue to find solutions and they need to find a fix, fast.

Michigan: Jon Teske had 11 points and was 5 of 13 after shooting 25.6% from the field in the previous five games. ... Livers also had six rebounds, while Teske added five rebounds and four assists. ... Wagner made thee 3-pointers on a day the Wolverines went 6 of 25 from beyond the arc and missed eight 3s in the second half. ... Simpson had seven rebounds and six assists. ... The Wolverines have won four straight in the Purdue series.

Purdue: Two of the Boilermakers starters — Evan Boudreaux and Matt Haarms — didn't score in the first half. Boudreaux finished with four points and 15 rebounds, his highest total since joining Purdue last season. Haarms had four points and three rebounds. ... Purdue shot 39.7% from the field and was 4 of 16 on 3s, with Stefanovic accounting for three of the 3s. ... The Boilermakers came into the game averaging 77.6 points and giving up 59.8 points at home this season.

Michigan guard Eli Brooks and Purdue swingman Nojel Eastern had a head-to-head collision on an inbound play early in the second half. Both left the game.

Eastern returned but Brooks eventually walked to the locker room with a towel covering his face and did not come back.

“All I saw was a lot of blood on the floor and that got me concerned," Howard said. “That kid is a warrior, he’s tough, he wanted to go back in the game. I said ‘No, we’re going to hold you out, your health is more important.’ ”

Michigan: Will try to extend its winning Thursday when Wisconsin visits Ann Arbor.

Purdue: Can complete a season sweep of rival Indiana on Thursday at Mackey.