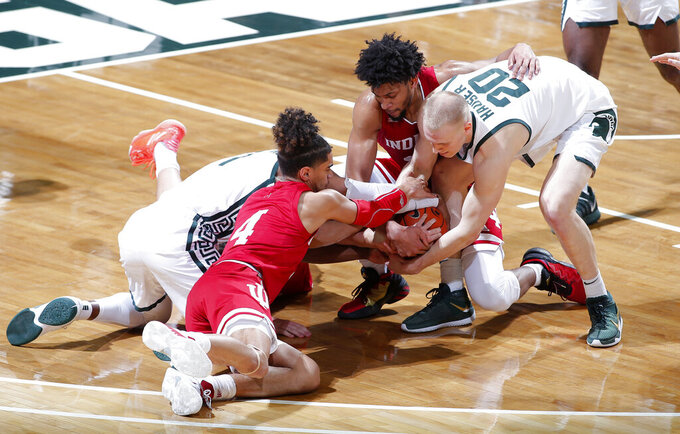 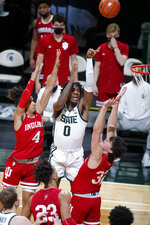 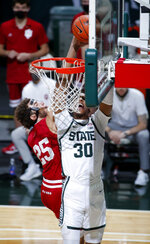 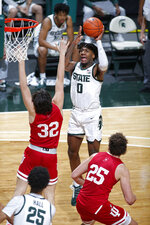 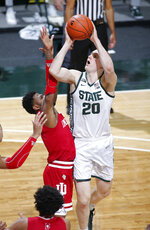 EAST LANSING, Mich. (AP) — Aaron Henry had 18 of his 22 points in the second half, leading Michigan State to a 64-58 win over Indiana on Tuesday night in a matchup of teams on the bubble to play in the NCAA Tournament.

“The pressure is on," Henry said.

Michigan State's Joshua Langford scored 13 points and Gabe Brown added 10 points for a team that has won four of its last five games.

Rob Phinisee scored 16 points and was Indiana's only player in double figures.

Trayce Jackson-Davis was held to a season-low nine points and matched a career low by making only one shot on five attempts. The sophomore forward averages 20 points a game and scored a career-high 34 points in the last game against Michigan State.

“That was personal," Michigan State coach Tom Izzo said. “That was embarrassing. I recruited Trace, but you can’t give God 34 points."

Indiana has lost four in a row and five of its last six games. The late-season slide has hurt the Hoosiers chances of going to the NCAA Tournament for the first time since 2016 when former coach Tom Crean helped them earn a bid for a fourth time in five seasons.

Michigan State greatly improved its chances of playing beyond the Big Ten Tournament by beating then-No. 5 Illinois and then-No. 4 Ohio State last week at home. Those desperately needed quality wins followed a victory against the Hoosiers on the road.

Henry matched a career high with 27 points in the previous meeting, leading Michigan State to a 78-71 comeback win at Indiana less than two weeks ago. That victory was a third Quadrant 1 win this season for a team hoping to play in a 23rd straight NCAA Tournament.

Henry did not pick up where he left off against the Hoosiers, starting 0 of 5 and scoring just four points in the first half.

“He wasn’t very good in the first half,” Izzo said. “He took the blame at halftime.”

In the end, though, the junior forward made plays at both ends of the court to help Michigan State outlast Indiana.

“Aaron Henry made some crucial plays late," said Miller, who recruited Henry when he was a high school star in Indianapolis. “To his credit, he made some big baskets late and we didn’t, especially in the last 2½ minutes."

Indiana: Miller has been unable to stop a slump that has given the team a losing record in his fourth season in charge of the once-proud program.

Michigan State: It was not pretty, but the Spartans did enough to win a game that boosts their chances of extending their NCAA Tournament streak in a shaky season that included many players and coaches testing positive for COVID-19.

“I think we’re an NCAA Tournament team," said Izzo, adding the team's schedule and overcoming a coronavirus outbreak should be factors in its favor.

UGLY BEYOND THE ARC

Michigan State was 4 of 17 on 3-pointers and Indiana missed 18 of 20 shots beyond the arc.

“You're re going to have a hard time winning on the road if you’re 2 of 20," Miller acknowledged.

Indiana: Sophomore guard Armaan Franklin missed a second straight game after injuring his right foot in the first half against Rutgers.

“This kid will play dead," Izzo said. “He tried to shoot. He just couldn’t get that left arm up. We knew he was going to need surgery. He wanted to suck it up, but I wanted him to have a fair chance to play next year."

Indiana ends the regular season on the road against rival and 23rd-ranked Purdue on Saturday afternoon.

Michigan State closes the regular season Thursday night on the road against rival and second- ranked Michigan, which lost to No. 4 Illinois 76-53, and hosts the Wolverines on Sunday.

“What a cool opportunity this is," Izzo said.