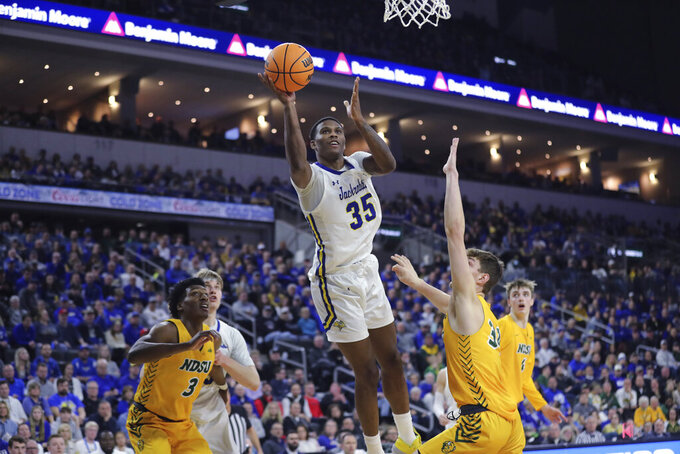 South Dakota State is bounding into the NCAA Tournament with the nation's longest winning streak at 21 games and the most-accurate 3-point shooting team in major college basketball in almost three decades.

In just 13 seasons in Division I, South Dakota State has become an NCAA Tournament regular out of the Summit League and one of the best mid-major programs in the country with former stars Nate Wolters and Mike Daum setting the standard.

The 13th-seeded Jackrabbits (30-4) will be making their sixth tournament appearance Thursday, when they face fourth-seeded Providence (25-5) in the first round of the Midwest Region in Buffalo.

At a time when mid-major programs are often turned into farm clubs for the schools from the so-called power conferences — such as the Big East, where Providence plays — South Dakota State has been a place where players tend to find a home.

“Quite frankly, our group has been together the last three years for the most part, and they're a very, very connected group," third-year coach Eric Henderson said Wednesday.

The Jackrabbits have had only one top player transfer out and up to a bigger program in recent years. David Jenkins followed former coach T.J. Otzelberger to UNLV in 2019.

Because of that, Henderson has only dabbled in the transfer market. The Jackrabbits have two players who transferred in from other four-year colleges, and only one is among the nine players who average at least 15 minutes per game.

“When you are part of a program that has a history like South Dakota State, playing in the NCAA Tournament and having winning teams, that's what kids want to be part of.” Henderson said.

“It's a cool logo," Henderson said.

Douglas Wilson, a senior from Des Moines, Iowa, played two seasons at junior college before landing at South Dakota State. After two years in Brookings, Wilson decided to take advantage of the extra year of eligibility the NCAA granted to athletes who played through the pandemic in 2020-21 to return this season.

The 6-foot-7 forward leads the team in scoring at 16.5 points per game and is shooting 57.4 percent from the floor.

“So, I'm a big loyalty guy. So there was always people talking about (transferring), but my loyalty was with South Dakota State, and I didn't want to be with nobody else,” Wilson said.

Wilson is the inside player on a team loaded with long-range shooters. South Dakota State enters the tournament shooting 44.7% from 3-point range. The last team to shoot better than that for a full season in Division I was Indiana, which made 45.4% percent on 3s in 1993-94.

Baylor Scheierman is shooting 47.6% from deep for the Jackrabbits, and that's third-best on the team behind Charlie Easley and Alex Arians. Both are above 50%.

“I think coach has done an incredible job with keeping them simple,” Providence coach Ed Cooley said. “They know who they are. I don't think they take bad shots. You can see they have a lot of offensive synergy and continuity."

Cooley orchestrated one of the biggest turnarounds in the country after the Friars went 13-13 last season. But there are still skeptics. The Friars have heard they have been dubbed the luckiest team in America after winning 15 games by a single-digit margin, including three in overtime.

The Big East regular-season champions are only a two-point favorite against South Dakota State, according to FanDuel Sportsbook. The Jackrabbits, who have not lost since Dec. 15, are a popular upset pick in the bracket.

“I don't think there is a person in America that has given us a chance in this game we're about to play, not one person,” Cooley said.

At least the luckiest team in the country starts its NCAA Tournament on St. Patrick's Day?

“Hell, I may be the leprechaun tomorrow,” Cooley said.

The Midwest Region features two All-Americans and player of the year contenders in Kansas' Ochai Agbaji and Iowa's Keegan Murray.

Agbaji entered the NBA draft after his junior season, but decided to come back to Kansas this season and has blossomed. The senior improved his shooting percentage overall, from 3-point range and from the free-throw line.

Kansas coach Bill Self said that while Agbaji has become a star he doesn't necessarily have to carry the team in the postseason.

“You know what I think he can do to really help us and himself is just be who he is and not try to be more than what that is,” Self said. “What that is is plenty. And he doesn’t need to be a superhero. We’ve got good players around him.”

Agbaji heads into the top-seeded Jayhawks' first-round game against 16th-seeded Texas Southern (19-12) in Fort Worth, Texas, averaging 19.7 points per game.

Murray and the fifth-seeded Hawkeyes (26-9) are in Buffalo to face 12th-seeded Richmond (23-12), which made a surprising run to an Atlantic 10 Tournament championship to reach the NCAAs.

Murray made a leap this season, leading the Big Ten in scoring at 23.6 points per game after being a role player as a freshman.

“I think last year, you saw flashes of that,” Iowa guard Jordan Bohannon said. “Obviously, it was really hard to see. We had so many talented guys last year from Joe Wieskamp to CJ (Fredrick) to Luka Garza.”

“That step just doesn’t happen by accident,” Bohannon said. “That step happens by day in and day out of continuing to work hard and helping this team win, and that’s exactly what he did in this offseason.”

The 8-9 game in Fort Worth will match two conference defensive players of the year.

Nathan Mensah of eighth-seeded San Diego State was the DPOY in the Mountain West, averaging two blocked shots per game for the team that led the conference in fewest points allowed (57.75) and field goal percentage against (38.2%).

Ryan Kalkbrenner of ninth-seeded Creighton was the Big East's defensive player of the year. He averaged 2.7 blocks per game and the Bluejays were the toughest team in their conference to make a basket against, allowing opponents to shoot 38.6% from the field.

“Both teams are really close to each other as far as profile,” San Diego State coach Brian Dutcher said. “You can make mistakes on the perimeter, but anything around the rim is protected, hard to score at the basket. So that’s going to be a great challenge for both teams.”