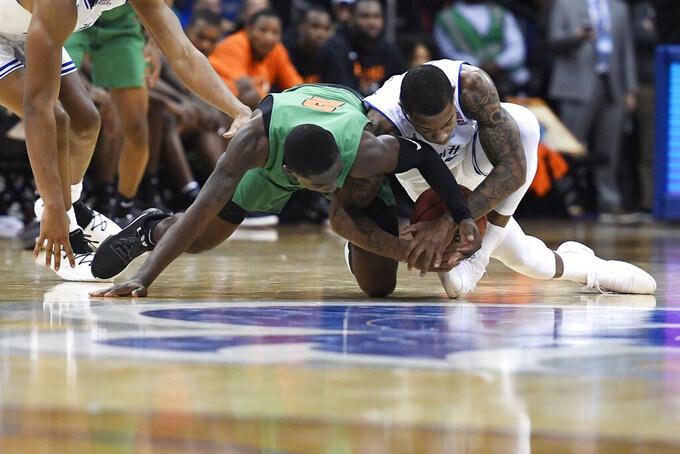 NEWARK, N.J. (AP) — Myles Powell yelled “smile a little bit” to Seton Hall coach Kevin Willard as the star player was on his way out of the media room.

Powell scored 23 points and Jared Rhoden had 10 points and 12 rebounds, leading No. 13 Seton Hall to an 87-51 victory over winless Florida A&M on Saturday.

The Pirates pulled away from the Rattlers after a sleepy week of practice and a shaky start, and Willard wasn’t pleased with his team's performance in front of a crowd of 9,656 at the Prudential Center.

“We had a great crowd coming for a 12 o’clock game,” he said. “We kind of slept walked through 20 minutes of a game. Our kids play hard, they’re fun to watch, but you can’t come out and sleepwalk when people come out and watch it. It’s unacceptable.”

Quincy McKnight had 14 points and five assists for Seton Hall (4-1), which led by 18 before carrying a 36-24 advantage into the break.

Willard is “just saying that as the team that we want to be that we got to practice to get better, not just to get through it,” Powell said, “and he said all week that's all we were doing, was just trying to get through practice and just get it over with. He said it shows today.

“The score — I don’t feel as though we were playing our best basketball.”

Seton Hall: The Pirates continue to look the part of a Top 25 team despite their lulls against a lowly opponent. The next stretch will be a good litmus test for March — they head to the Bahamas for the Battle 4 Atlantis to play No. 11 Oregon and potentially No. 8 Gonzaga. No. 5 North Carolina, Alabama, Iowa State and Michigan are the other Power Five teams in the event.

Florida A&M: Coming off a 12-19 season, the Rattlers are still looking for their first win of the season, and the upcoming schedule doesn’t look very good. They visit Kansas State on Dec. 2 and No. 20 Tennessee on Dec. 4.

With this being the only game of the week for Seton Hall, the Pirates should stay about where they are in the Top 25.

ON THE ROAD AGAIN

The Pirates won’t play at home again for nearly a month, when they host No. 6 Maryland on Dec. 19.

Seton Hall: Takes on No. 11 Oregon in the Battle 4 Atlantis in the Bahamas on Wednesday.