Newcomers lead No. 25 Michigan to win over Bowling Green 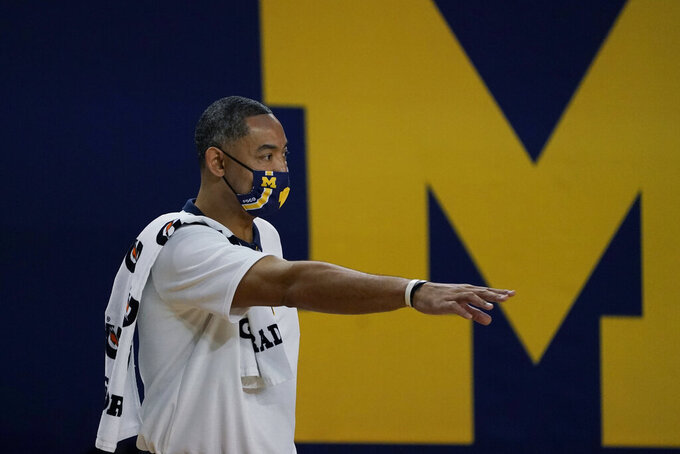 ANN ARBOR, Mich. (AP) — Mike Smith was in the starting lineup and made his presence felt right away. Chaundee Brown came off the bench and eventually led Michigan in scoring.

Brown scored 18 of his 19 points in the second half and Smith had 16 points and eight assists to lift the 25th-ranked Wolverines over Bowling Green 96-82 on Wednesday in the season opener for both teams.

“We knew that we wanted to come in and help this team. We knew they were really good last year,” Brown said. “Coach (Juwan) Howard recruited us for a reason.”

Isaiah Livers added 17 points for Michigan. The Wolverines never trailed, although it took until the latter part of the second half for them to really put the Falcons away.

“I think the guys were excited and ready to play. We just didn’t play well," Bowling Green coach Michael Huger said. "We ran out of gas.”

Michigan was warming up for a Big Ten Tournament game in March when the season was halted because of the coronavirus pandemic. After Zavier Simpson and Jon Teske graduated, the Wolverines’ roster is now a blend of old and new. Livers and Franz Wagner are key holdovers, and Michigan welcomes a handful of transfers and promising freshmen.

Brown and Smith transferred in from Wake Forest and Columbia, respectively. Smith quickly showed why he was a prolific scorer in the Ivy League. He scored 12 points in the first half — making all three of his attempts from the field — and Michigan led 25-14 after a layup by freshman center Hunter Dickinson.

Brown made a couple 3-pointers about 80 seconds apart to put Michigan up 61-47 in the second. He would make five 3s in the half in all.

“He gave us a big spark,” Howard said. “He's another experienced guy that comes from a Power Five conference. ... He was well coached by Danny Manning. I went out and got him. When I saw that he hit the transfer portal, I jumped on it right away.”

Livers dunked off an alley-oop pass from Smith to put the Wolverines up 87-68, and Michigan easily closed out the game from there. The Wolverines didn't seem to have trouble summoning energy despite the lack of fans at Crisler Center.

“I think it's cool just to be in your building, getting the opportunity to play the game," Howard said. "If we had a chance to play outside in the playground, I'm ready to go and coach our guys.”

Bowling Green: The Falcons acquitted themselves fine for much of this game. Turner, who entered the transfer portal after last season but ultimately decided to stay at Bowling Green, showed why he's so important to the team's hopes.

Michigan: It was a convincing win for the Wolverines, who should be pleased with how comfortable their new players looked after what has certainly been an unusual offseason and preseason.

The 7-foot-1 Dickinson finished with 11 points and eight rebounds in his debut. He was the high scorer among the Michigan freshmen.

“They’re bigger than they look," Huger said. "They were able to exploit our size.”

Huger said Matiss Kulackovskis missed the game because of an injury, and Josiah Fulcher was out for disciplinary reasons.

Michigan edged LSU by 14 points for the final spot in the Top 25. With several home games in a row to start the season, the Wolverines certainly have a chance to stay in the ranking and move up.