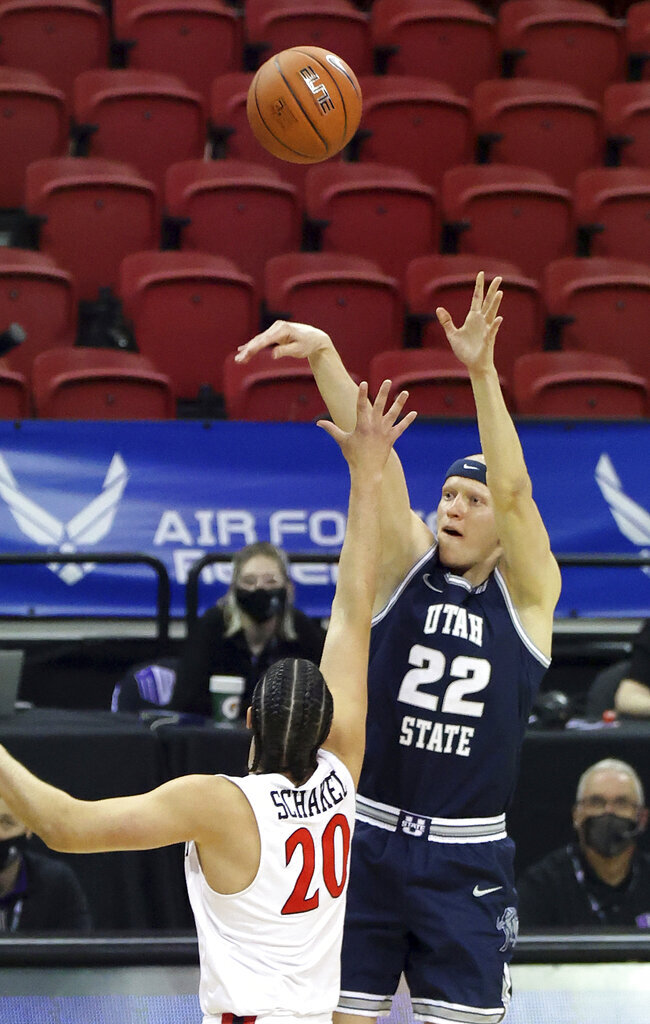 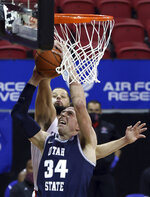 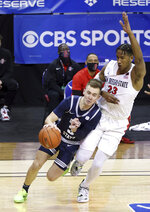 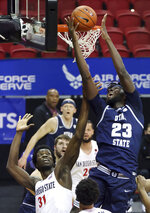 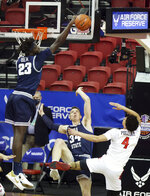 It was time to turn the tables Saturday.

Matt Mitchell scored 14 points to lead No. 19 San Diego State to a 68-57 victory over the Aggies to win the title and secure the league’s automatic berth into the NCAA Tournament.

“I know the guys that were there last year definitely had it in mind,” said Mitchell, who was named the tournament’s MVP. “We kind of hoped that Utah State would be here so we could get our redemption.”

The Aztecs, who also won the regular-season championship, had lost six of their previous seven title game appearances.

It marked just the fifth time the No. 1 seed won the title in 22 years.

“Our depth was something that was important, and it paid off for us in the end,” San Diego State coach Brian Dutcher said. “I think we had fresh legs down the stretch cause we could rest players. Everybody that plays for us contributes and it’s a different player every night.”

San Diego State (23-4) snapped Utah State’s six-game winning streak, during which the Aggies (20-8) had allowed just 58.5 points per game. The Aztecs had their 58th point by the 5:53 mark of the second half.

Meanwhile, San Diego State held the Aggies to their second-lowest output of the season, 16.9 points below their season average of 73.9.

In a battle between the league’s two most stringent defenses, San Diego State exhibited its dominance with a 10-2 edge in steals. The turnover margin was seven, with Utah State committing 16 costly turnovers the Aztecs turned into 14 points.

Already having suffered a regular-season sweep by Utah State, the Aztecs wasted no time at distancing themselves from the second-seeded Aggies by using a 6-0 run to start the second half and take a 34-24 lead and never really looked back.

Outside of Queta, the Aggies couldn’t get much going with their offense, as the 7-footer had 12 of the team’s 24 points. While Queta was 4 of 6 from the floor in the first 20 minutes, the rest of the Aggies were just 5 of 18 (27.7%) from the field. Utah State was also plagued with turnovers, committing eight under San Diego State’s tenacious defense.

“There’s just a play here and a play there that can just change the game,” Utah State coach Craig Smith said. “This time around they made just a few more of those than we did. A couple of catastrophic turnovers … we just jumped and threw it, and they get a steal and go the other way. Those are big time game-changers and momentum-changers.”

Though the Aztecs weren’t as offensively efficient as Utah State in the first half, hitting just 12 of 33 (36.4%), they got better balance with six shooters contributing on the stat sheet.

With the loss, the Aggies now await their fate for a bid into the NCAA Tournament. Though Utah State has looked every bit like a team that deserves a bid, there’s never a guarantee with the selection committee as the Mountain West has been a conference denied at-large bids mainly due to its lack of Quad 1 wins. The Aggies have just two Quad 1 wins and one Quad 2 victory. It also has its two regular season wins over San Diego State.

“The top of this league is very strong,” Dutcher said. “Hopefully were a multi-bid league. But I know when those doors close and they get in that room, over the years the Power of 5s have won the day. Hopefully that changes tomorrow.”

Utah State: The Aggies came into the game ranked 22nd in the nation with 12.6 offensive rebounds per game, and with 136 more boards on the offensive glass than their opponents. Saturday they finished with 12.

San Diego State: Saturday marked the fifth time this season Mensah had at least eight points and eight rebounds. It was the first time he had accomplished the feat since Feb. 8.