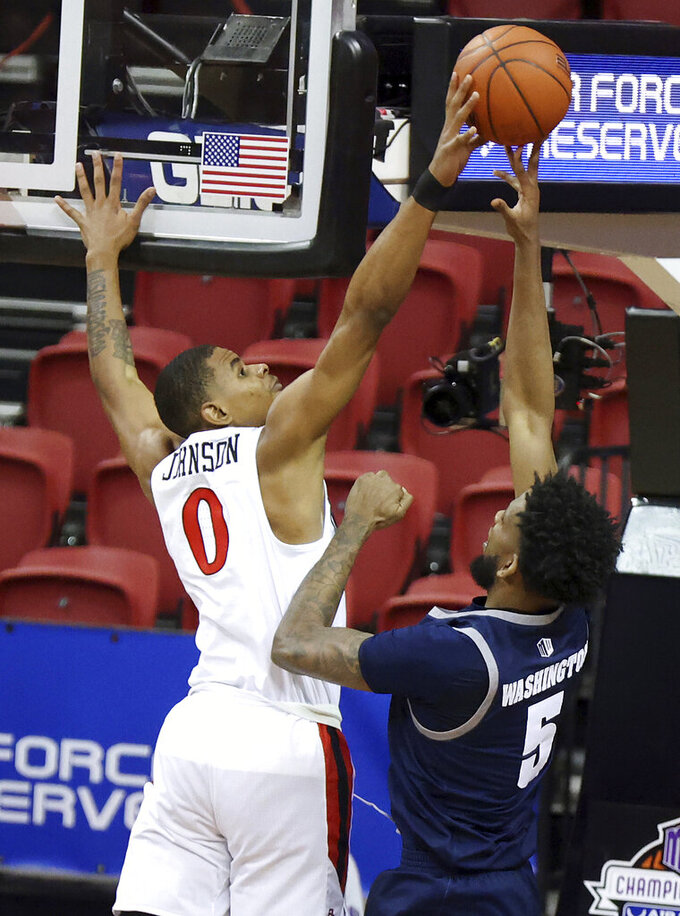 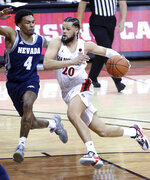 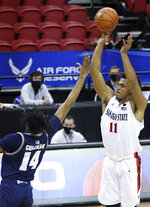 LAS VEGAS (AP) — Matt Mitchell had 24 points and eight rebounds to lead No. 19 San Diego State to a 77-70 victory over Nevada on Friday in the Mountain West Tournament semifinals.

The Aztecs (22-4) advanced to their fourth straight conference championship, and seventh in eight years. San Diego State will make its 14th appearance in the Mountain West title game, where it will play Utah State, a 62-50 winner over Colorado State.

“We found a way to make enough timely plays to get a win and get back into the championship game in the Mountain West,” San Diego State coach Brian Dutcher said.

The Aztecs’ 13-game winning streak is the third-longest current one, behind Gonzaga (26) and Prairie View (14).

Jordan Schakel scored 15 points, Trey Pulliam added 13 and Lamont Butler chipped in with 10 for the Aztecs.

San Diego State has won its last six against Nevada and improved to 4-0 against the Wolf Pack in the tournament.

“This is a really good team that we played obviously,” Nevada coach Steve Alford said. “They’re playing at a high level, and they’re really, really good. I think they’ve been the best in our league all season long.”

One night after Nevada’s “Big Three” of Sherfield, Cambridge and Washington combined for 75 points and shot 59% in a seven-point upset of Boise State, the trio combined to shoot 41% from the floor.

“We got off to a really slow start offensively,” Alford added. “Twelve turnovers in the first half led to a lot of transition stuff that we didn’t defend very well. The second half we settled down a little bit. They just guard and commit defensively so well.”

Clinging to a five-point edge out of intermission, the Aztecs opened the second half on an 11-5 run, extending their lead to 11, the largest against Nevada in the three games between the teams this season.

“The message at halftime was just stick to the genes and stay together,” said Mitchell, the Mountain West player of the year. “I don’t think we were doing anything wrong with the game plan, anything wrong on the court. I felt like we could’ve tightened up a little bit in the first half, so in the second half we came out and tightened up.”

Mitchell hit his first five shots of the second half and scored 15 straight points for San Diego State in a little more than five minutes to bolster the team’s second-half run.

“I just felt like I did my job on the team as being the aggressor,” Mitchell said. “I tried to be the aggressor and it paid off and took attention off some of the other guys on the team.”

The Aztecs hit eight of their first 11 attempts in the second half to distance themselves from the team they had close run-ins with during two regular-season wins.

The Aztecs, who came in ranked sixth nationally in scoring defense (60.3 ppg.) and eighth in field goal percentage defense (38.9%), limited Nevada to 37.5% shooting in the second half.

The Aztecs used an 11-0 run to open a 14-6 lead while the Wolf Pack went without a field goal during a stretch of 7 minutes, 25 seconds.

Cambridge stopped the drought with a 3-pointer and Nevada rallied to pull within 28-27.

But turnovers hurt the Wolf Pack, whose 12 first-half turnovers transitioned into 10 points for the Aztecs.

San Diego State got good balance from Terrell Gomez, Butler, Schakel, and Pulliam in the first half, as the quartet combined to score 26 points on 47.6% shooting.

Nevada: Sherfield, normally a key component to the Wolf Pack offense, was 0 for 6 from the floor during the first half, which included three misses from 3-point range.

San Diego State: It was a night of milestones for three Aztecs. Schakel became the 35th player in school history to reach the 1,000-point plateau, Mitchell now owns a 9-2 mark against Nevada, and Gomez improved to 14-0 as a starter for the Aztecs - the best record for a starting player in school history. As a team, the Aztecs improved to 6-0 while wearing their “Kawhi Leonard-era throwback” shorts.

Nevada: Hopes for an NIT invite