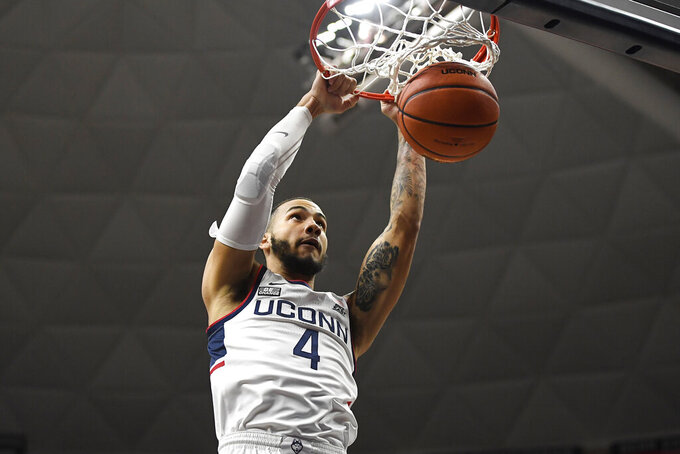 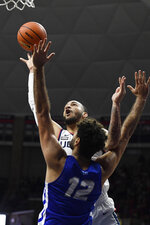 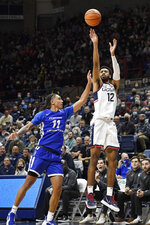 The 6-foot-9 sophomore from Mali ran through, past and around Central Connecticut on Tuesday, scoring 20 points and leading the Huskies to a season-opening 99-48 rout of the Blue Devils.

“It's tough to guard me, so basically I score whenever I want,” said Sanogo, who hit nine of his 11 attempts from the field.

R.J. Cole scored 15 points and Tyrese Martin added 14 for the Huskies, who led by 29-points at halftime and forced 29 Blue Devil turnovers for the game.

Sanogo opened the scoring with a layup and had six points as UConn jumped out to a 22-5 lead.

The Huskies, who are ranked to start the season for the first time since 2016, made their first eight shots and held the Blue Devils to just two baskets in the first eight minutes.

The Huskies took their first 20-point lead at 34-14 when Akok Akok grabbed a deflection out of the air and turned it into an unintentional ally-oop layup.

Joe Ostrowsky had 12 points and Nigel Scantlebury 11 for Central Connecticut, which finished 5-16 last season and is picked to finish last in the Northeast Conference.

Sanogo scored the first four points as the Huskies opened the second half on a 10-2 run.

“He's a special guy,” Hurley said. “And I think from an offensive standpoint, one of the best low-post scorers in college basketball this year.”

The Huskies are 16-0 all-time against the Blue Devils from New Britain.

CCSU: It was the head-coaching debut for Patrick Sellers, who played for the Blue Devils and was UConn's director of basketball operations from 2004-2007 before serving as an assistant under Hall-of-Famer Jim Calhoun from 2007-2010.

“One of my friends always says, once you slide over 18 inches, everything kind of changes,” he said. “And it does change ‘cause everybody is looking at you during the huddle. ’What are we running next? What are we doing here?' But it felt like another game. Obviously we wanted to play better as a team.”

UConn: The Huskies played without sharp-shooting freshman Jordan Hawkins, who sprained his right ankle in practice Saturday. Hurley said Hawkins is day-to-day and could be ready by Saturday or next week at the latest.

UConn scored 47 points off CCSU turnovers. The Blue Devils scored four points off UConn's 14 turnovers. The Huskies held a 58-22 scoring advantage in the paint and 30-6 on the fast break. They won the rebounding battle 34-23.

Hurley was able to get 13 players into the game. Eleven got in before halftime and each played more than six minutes in the game. UConn, which lost leading scorer James Bouknight to the NBA, returns nine scholarship players, including 74.3% of the scoring and 78.3% of the rebounding from last season’s NCAA Tournament team.

UConn hosts Coppin State at the XL Center in Hartford on Saturday.