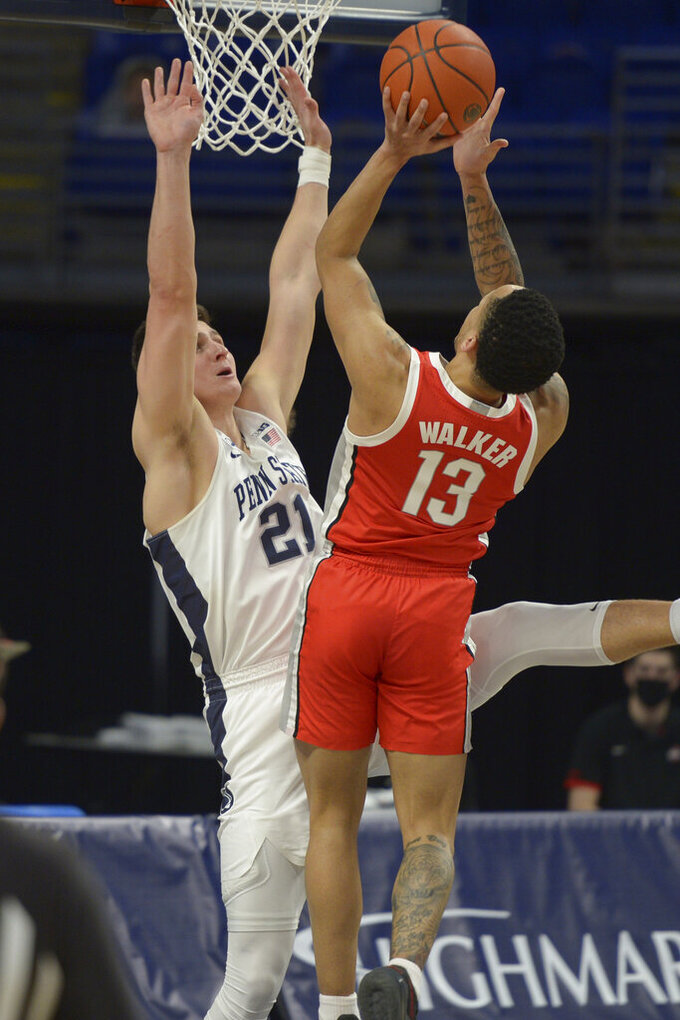 STATE COLLEGE, Pa. (AP) — Ohio State coach Chris Holtmann let out a sigh, leaned forward toward his computer and rested his chin in his right hand.

His cheeks were a bit flushed as his Zoom background flickered behind him after No. 4 Ohio State outlasted Penn State 92-82 in a back-and-forth game on Thursday.

“Do I look like I just survived?” Holtmann said. “That’s exactly how I think we all feel. That was a tough one, as we expected it to be.”

Holtmann’s teams had dropped its last two games on Penn State’s court and weren’t about to overlook an inconsistent Nittany Lion squad, even with a matchup against archrival No. 3 Michigan looming.

E.J. Liddell scored 17 of his 23 points in the first half and the Buckeyes overcame an eight-point deficit in the second half after leading for nearly all the first.

Duane Washington scored 21 points and C.J. Walker added 13 for the Buckeyes (18-4, 12-4 Big Ten), who used a 15-0 run midway through the second half to take control and win their seventh straight.

“I did not think our guys were looking beyond anything other than this game,” Holtmann said. “I thought they were locked in on this game. I thought their preparation was very good. I thought they brought the appropriate amount of focus, knowing how good this Penn State team is.”

Good enough to have the Buckeyes’ numbers as of late.

The Nittany Lions nearly upset Ohio State in Columbus earlier this season. They hammered Holtmann’s squad by 23 in 2018 and won by 14 last season. Ironically, Penn State had also beaten the team ranked No. 4 in the AP Top 25 on its home court in three consecutive tries.

The Buckeyes led 47-43 at halftime after shooting 65% from the floor in the first half. They made nine straight baskets at one point, and six Buckeyes made shots in the opening 10 minutes.

But they were forced to play a smaller lineup for the early moments of the second half and fell behind after Lundy got hot. The Penn State forward made three 3-pointers in a 2:14 span to put the Nittany Lions up 59-51 with 14:53 to play.

Washington picked up the pace as Liddell was sitting courtside in foul trouble. The Buckeyes’ guard scored seven points in 1:24 and drained a 3-pointer to give Ohio State a 72-64 lead with 8:58 left.

“That’s a Final Four-caliber team,” Penn State interim coach Jim Ferry said. “I thought we came out and played really hard, we played really fast, we were the aggressor. Especially in the second half.”

Penn State cut the deficit to four with 5:10 remaining, but couldn’t get any closer as the Buckeyes made nine of their final 11 free throws to close out the game.

Both teams appeared to avoid serious injuries. Wheeler collided with Walker late in the first half and was helped off the court favoring his right leg. He returned in the second half.

Meanwhile, Holtmann said his team needed “a good day in the training room” soon. Forward Seth Towns rolled his left ankle but was able to return. Additionally, Walker has been playing with three fingers taped together on his right hand.

NO UPSET THIS TIME

Penn State’s last three home wins over No. 4 teams came against Michigan, Iowa and Maryland in 2013, 2016 and last season.

Ohio State: The Buckeyes had already equaled their 11 conference wins from a year ago. Three out of their next five games will come against ranked opponents, and the Buckeyes get all of them at home, where they’re 10-1 this season.

Penn State: The Nittany Lions played arguably their best first half of the season. They hadn’t scored more than 61 points in any of their last four, but shot 53% from 3-point range in the first half and had the Buckeyes on their heels plenty.