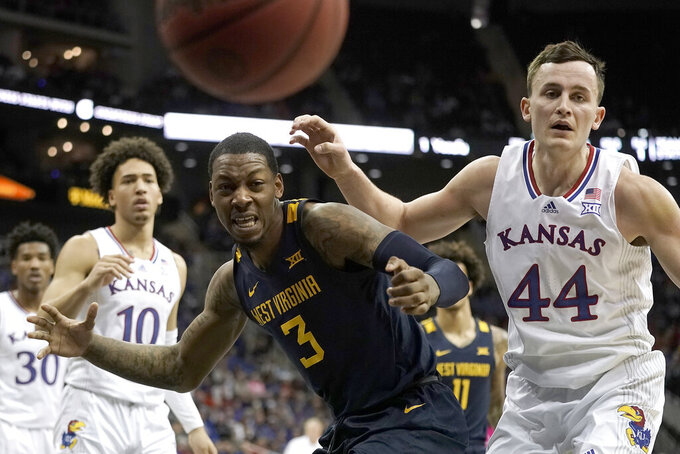 Kansas forward Mitch Lightfoot (44) and TCU guard Francisco Farabello (3) chase after a loose ball during the first half of an NCAA college basketball game in the quarterfinal round of the Big 12 Conference tournament in Kansas City, Mo., Thursday, March 10, 2022. (AP Photo/Charlie Riedel) 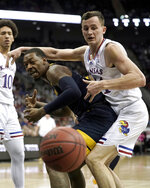 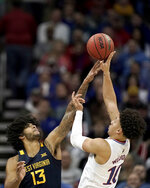 Nobody was more upset about the situation than Huggins.

“Nobody wants that. We caught a big break there but it's not a break we wanted,” Self said after the sixth-ranked Jayhawks cruised to an 87-63 victory Thursday. “I don't and I didn't like it.”

Ochai Agabji scored 18 points for the top-seeded Jayhawks (26-6), who built a 41-19 halftime lead and never let up. Christian Braun had 11 points and a career-high 14 rebounds, and Jalen Wilson finished with 15 points.

Next up is fifth-seeded TCU, which rallied from 20 down to beat No. 22 Texas, in the semifinals Friday night.

“It is really good to get a win like that, to start off fast, and then we got off our feet a little bit,” Braun said. “We can focus on our next game. We got everybody involved. We got confidence going into the next game.”

Most of the excitement in the Big 12 Tournament's second quarterfinal came in the first 10 minutes, when Jayhawks roared to a 19-4 lead and had a T-Mobile Center full of red- and blue-clad fans whipped into a frenzy.

That's when Sherman missed a bucket — the 16th miss in the Mountaineers' first 17 shots — and complained to referee Doug Sirmons about the no-call. Sirmons immediately gave him a technical foul, and when Huggins roared off the bench in defense of his player, the Mountaineers' Hall of Fame finalist got two technicals of his own.

“He was definitely trying to defend us. It's what he’s done all year,” Mountaineers guard Sean McNeil said. “It's not my place to say whether the calls were right or wrong. My job is to play.”

Huggins' longtime associate head coach, Larry Harrison, took over when he headed to the locker room.

“They need to put bigger TVs in there,” Huggins said in a moment of levity. “The TVs are awfully small. We had a hard time getting a true picture of what was going on with those dinky TVs in there. They really need to upgrade that system.”

Wilson took the free throws for the Jayhawks, making five of the six from the three technical fouls, and that gave the Big 12 regular-season co-champs a 24-4 lead. It The lead swelled to 41-19 by halftime.

And unlike the opening quarterfinal Thursday, when the Horned Frogs dug out from an 18-point halftime hole to beat the fifth-seeded Longhorns, the Jayhawks provided an answer every time West Virginia tried to mount a run.

“Confidence is big,” said Mitch Lightfoot, who had 10 points and gave ailing big man David McCormack a rest. “We got everybody out there, the majority of guys scored; that's good to see the ball go in. We're confident going into the next game.”

Agbaji, the Big 12 player of the year, got off to a hot start by scoring nine of the Jayhawks' first 11 points. But the senior cooled down a bit after that, and he was just 1 of 6 from beyond the arc with three rebounds and no assists.

West Virginia again got a big performance from Curry, who came off the bench to score 17 in a first-round win over Kansas State. But the rest of the Mountaineers' backcourt continued to struggle, a problem compounded by their lack of a reliable presence in the post. They were outrebounded 48-27 and outscored 48-22 in the paint.

Kansas shot better than 50% from the field in each half, often getting to the bucket for easy baskets down low. But the Jayhawks figure to have a much tougher time against Eddie Lampkin and the Horned Frogs, whose size caused them fits when the teams split a pair of matchups just last week.

The Jayhawks meet the Horned Frogs, who have never played for a Big 12 title, in Friday night's semifinals.