Oregon anxious to take floor after advancing without playing 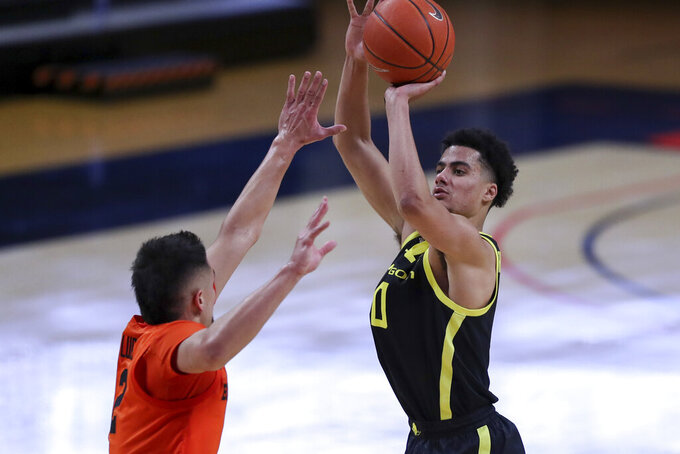 The Oregon Ducks moved on in the West Region without the usual excitement that accompanies moving on.

Or with that momentum boost, either.

The Ducks earned a free pass to the second round after positive virus tests bounced VCU from the NCAA Tournament hours before Saturday's scheduled tip-off. Waiting for Oregon on Monday will be No. 2 seed Iowa, which is now tournament-tested after an 86-74 win over Grand Canyon.

Meanwhile, the seventh-seeded Ducks straddle a fine line between rested and rusty. By the time Oregon takes the floor, it will have been 10 days since the Ducks played in the Pac-12 Conference Tournament.

Oregon coach Dana Altman is hoping the Ducks can weather the first 10 minutes, just to settle in and get back "in the flow of things after a 10-day layoff,” he said.

It certainly was a wild swing of emotions for the Ducks on Saturday. Altman said he was in the middle of a pregame meal when athletic director Rob Mullens summoned him out of the room.

“I knew something was wrong," Altman said. “I got a little nervous. I was worried maybe it was our guys.”

It wasn't. VCU had multiple players test positive for COVID-19. The Rams received the news of the cancellation — officially declared a “no contest” — after they had finished their pregame meal.

For the Ducks, it was off to the court for a late-night practice session.

The intensity was low at first, but then quickly "picked up, realizing we’ve got a game on Monday,” Altman explained. “It’s not the way you want to advance. You want to go out and play and win games and get some momentum going."

Iowa big man Luka Garza knows the Ducks will be antsy to kick off their tournament.

“It's unfortunate the game wasn't able to happen for them," Garza said. "They'll be excited and pumped up to play us.”

Gonzaga coach Mark Few doesn't have the warmest memories of Hinkle Fieldhouse, the place where the top-seeded Bulldogs face No. 8 seed Oklahoma on Monday in the second round.

In 2013, the Bulldogs played Butler at the historic arena in a midseason nonconference matchup. Butler escaped with a 64-63 victory when Roosevelt Jones stole an overthrown inbounds pass with 3.5 seconds left, drove from midcourt and hit a buzzer-beating floater.

“Fond memories for 39 minutes and 51 seconds until we screwed up an out-of-bounds play and gave them the win,” Few recalled on Sunday. “Brief fond memories of a good atmosphere.”

Ohio coach Jeff Boals played on the 1993-94 Bobcats team that won the Mid-American Conference championship and made it to the NCAA Tournament. He has a group chat with those teammates, who left many, many messages after his 13th-seeded team knocked off Virginia 62-58 in the first round.

Some of his Ohio teammates plan to make the trip to Indy for the Bobcats' game Monday with No. 5 seed Creighton.

“It’s a bond like no other, when you’re part of a championship team," Boals said of a team that included Gary Trent, a first-round NBA pick. “You’re doing reunions. You’re in each other's weddings. With social media now, there’s not a day goes by when we don’t talk.”

ALL IN THE FAMILY

Oklahoma guard De’Vion Harmon missed the Sooners' win over Missouri after testing positive for COVID-19. But he joined in the postgame fun through FaceTime.

“There’s nothing better in sports than a spontaneous locker room celebration," Sooners coach Lon Kruger said. “You can’t practice them, you can’t express how they feel, the look of satisfaction on the players’ faces and they had De’Vion on FaceTime while that was going on, and he had the biggest smile."

The sophomore Harmon was the team’s second-leading scorer and is expected to miss the Gonzaga game as well.

Forward Jalen Wilson is scheduled to join third-seeded Kansas for its second-round game against Southern California on Monday. Wilson missed the win over Eastern Washington due to COVID-19 protocols.

“He’s suiting up, and I anticipate him getting in the game,” Kansas coach Bill Self said, explaining Wilson is scheduled to arrive in Indianapolis in time for the team’s morning shoot-around.

Self said he would play it by ear how much action Wilson sees against the sixth-seeded Trojans.

David McCormack needed a half to find his rhythm in a 93-84 win against Eastern Washington on Saturday in his return from quarantine. He finished with 22 points and nine rebounds in 25 minutes.