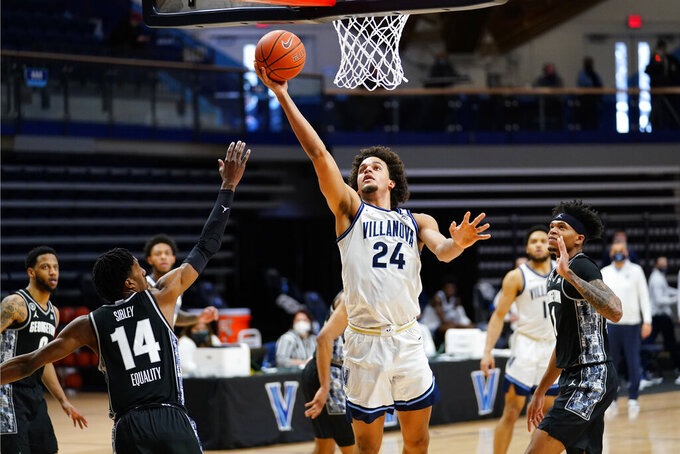 Villanova's Jeremiah Robinson-Earl (24) goes up for a shot against Georgetown's Jamari Sibley (14) during the first half of an NCAA college basketball game, Sunday, Feb. 7, 2021, in Villanova, Pa. (AP Photo/Matt Slocum)

VILLANOVA, Pa. (AP) — Jermaine Samuels and Villanova bounced back in a big way.

Samuels scored a career-high 32 points to lead No. 3 Villanova to an 84-74 victory over Georgetown on Sunday.

Jeremiah Robinson-Earl added 14 points and Collin Gillespie had 12 for the Wildcats (12-2, 7-1 Big East), who rebounded from a loss at St. John’s.

“I didn’t have the game I wanted,” Samuels said of Wednesday's performance. “It was getting back to our Villanova habits, coming out and executing. It wasn’t just about the offense.”

“He came out with a fierce focus,” Villanova coach Jay Wright said. “He did so many little things tonight.”

“This was a game we had an opportunity to win,” Hoyas coach Patrick Ewing said. “They’re a good team, very well coached, but we were right there.”

Georgetown took its last lead on Blair’s 3-pointer with 5:46 to play that made it 67-66. After a pair of free throws by Justin Moore gave Villanova a 72-69 advantage, Wahab’s two-handed dunk attempt went long off the back rim. Caleb Daniels drained a 3 on the Wildcats’ ensuing possession and Villanova was its way to its 10th win in 11 games.

Wright liked the way his team responded after its worst performance of the season.

“There are certain things in the St. John’s game I can’t explain, Jermaine being one,” Wright said. “We have talented, humble players that assess their performance honestly and don’t make excuses. We got our butts beat. We looked at it, and we took responsibility.”

Unlike the first contest on Dec. 11, when Georgetown led by as many as 18 points in the opening half before losing 76-63, it was Villanova that jumped out to a double-digit first-half advantage. Samuels’ 3-pointer with 8:50 left in the half made it 30-20.

But Georgetown clawed back, outscoring the Wildcats 15-3 over the next six minutes to go up 35-33 on Chudier Bile’s reverse layup. Villanova scored four of the final six before the break to enter the locker room ahead 37-35.

Villanova originally was scheduled to host Xavier on Sunday, but that game was postponed due to COVID-19 issues within the Musketeers’ program. Ewing jumped at the opportunity to bump up the game, which had been scheduled for Feb. 17.

“Who knows what’s going to happen next week?" he said. "I’d rather get the game in.”

Sunday’s matchup was the 88th between the longtime Big East rivals, and the Wildcats’ victory evened the series at 44 wins apiece.

Georgetown: After a three-week pause due to COVID-19, the Hoyas entered Sunday on a two-game winning streak, rebounding from a 3-8 start to beat Providence on Jan. 30 and No. 15 Creighton on Wednesday.

Ewing said the break gave Georgetown a chance to regroup. He said the Hoyas are finally clicking — and the coach has been getting the recipe right.

“I keep always talking about how I am the chef and I’m in there cooking up the gumbo,” he said before the game. “Well, the gumbo is finally starting to taste right. I’m putting in all the right ingredients right now for that gumbo to taste right.”

Villanova: After the 70-59 loss at St. John’s, the Wildcats likely will drop a few spots in the AP Top 25 when the new poll is released Monday. Wright said that defeat is just a chance for Villanova to get better, something the Wildcats proved against the Hoyas.