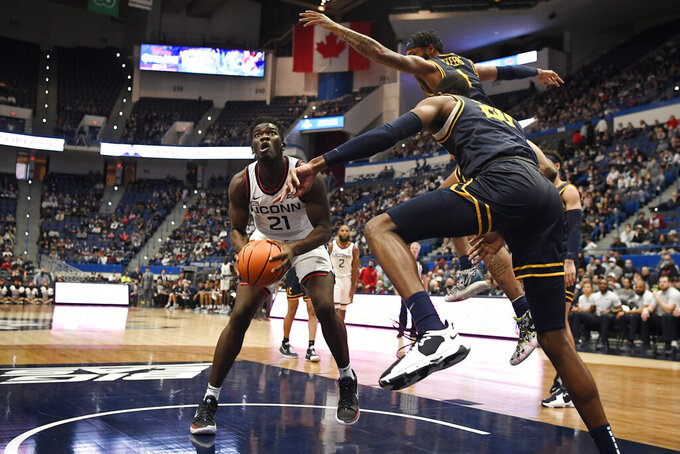 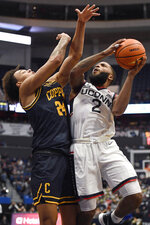 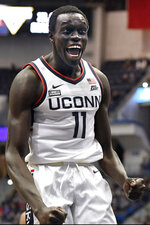 HARTFORD, Conn. (AP) — UConn has a rather simple approach on offense this season: go low to Adama Sanogo.

“When in doubt, just give Adama the ball at this point,” UConn forward Tyrese Martin said. “He’s scoring at a high clip so we’re going to keep giving it to him.”

Sanogo kept up his sharp shooting, tying his career high with 20 points as No. 24 UConn beat Coppin State 89-54 Saturday.

“They’re pretty fatigued. We played four games in five nights to start the season against some real high-level opponents,” Coppin State coach Juan Dixon said. “But I’m proud of our guys. They went out and competed. That (UConn) is a very good basketball team, very well coached.”

The Huskies hit their first eight shots in a season-opening win over Central Connecticut State on Tuesday. In their second game, it was the opposition that started rather quickly.

Coppin State made four of its first five shots, including a pair of 3-pointers, to take a 10-6 lead.

UConn responded by scoring 14 straight points, the first four by Cole and the next eight by Martin. An alley-oop from Jalen Gaffney to Akok Akok completed the run.

Gaffney came off the bench to contribute 11 points and eight assists.

UConn coach Dan Hurley says his team essentially has eight starting players at this point, and that depth helped carry it Saturday.

“A couple of those eight starters didn’t play particularly well tonight but when you have a deep team and you have that type of quality through your top eight, you can still do relatively well,” Hurley said.

UConn played at the XL Center, its first game at its secondary home arena since an 81-65 win over Central Florida on Feb. 26, 2020. The Huskies played all of their home games at their on-campus arena in Storrs, Gampel Pavilion, in the 2020-21 season because of the pandemic.

Saturday was the first time Dixon faced the Huskies as a head coach, but the former Maryland star remembers well his last game as a player against the Huskies. That came in the regional final of the 2002 NCAA Tournament when Maryland beat UConn 90-82 in Syracuse, New York.

Dixon scored 27 points in the game, three of which came on a long jumper with his team trailing 77-74 with 3:48 to play.

“Over Taliek Brown, who I see sitting over there,” Dixon said of the former UConn point guard who is now the program's director of player development.

After beating UConn, Maryland went on to win the program's first national championship.

“That was a big game, man. It was back-and-forth. You had multiple NBA players from both teams on that floor. Caron Butler, Ben Gordon, Emeka Okafor. It was a high-level performance by both teams. Steve Blake made a big 3. Lonny Baxter played well, Chris Wilcox. It was good to be a part of that classic game against UConn," Dixon said.

Coppin State: This was the Eagles' fourth game in five days following losses on back-to-back nights against Loyola Chicago and DePaul, and 81-69 to Rider on Friday. The Eagles will play 10 games in the month of November, more than any NCAA program.

UConn: Guard Corey Floyd Jr. has decided he will take a redshirt year rather than try and play this season. Floyd was originally recruited for the 2022-23 season, but graduated early from high school and joined the Huskies this fall. He will not turn 18 until Jan. 14. Another freshman, Jordan Hawkins, missed his second straight game with a right ankle sprain.

Coppin State: The Eagles continue their grueling early-season schedule with a visit to North Carolina-Greensboro on Monday.