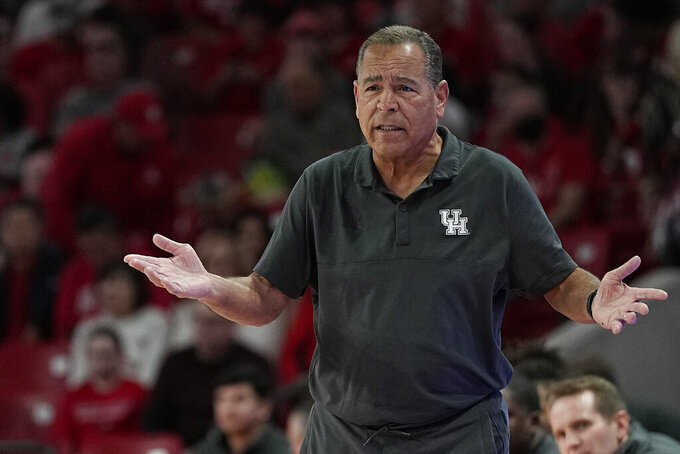 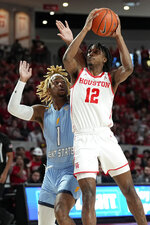 HOUSTON (AP) — Marcus Sasser scored 19 points, J’Wan Roberts added 11 points and 14 rebounds, and No. 2 Houston held on to beat Kent State 49-44 on Saturday and give itself an opportunity to take over the No. 1 ranking.

“That’s the first time all year someone has punched us in the mouth,” Houston coach Kelvin Sampson said. “We’re used to punching other people in the mouth around here.”

“Sitting here with an opportunity, whether we are or not after today, who knows, I don’t know,” Sampson said. “Obviously, I’m happy for all the guys who came before us. North Carolina has been No. 1 more times than I’ve been alive, so it’s no big deal to them, but it should be a big deal to us.”

The Cougars’ defense carried them, holding the Golden Flashes to 24% shooting, including 6 of 29 from beyond the arc. Houston outrebounded Kent State 56-33 and held a 28-18 advantage in points in the paint.

“There was a really, really tough team on the floor today, but it just happened to be coach (Rob) Senderoff’s team,” Sampson said. “I was proud of the win. I’m not going to throw it away, mind you. You can do whatever narratives you want. A month from now it’s going to count as a win. I’m proud of the way we kept fighting. We outrebounded that team by 23. Soft teams don’t do that. We play tough, too. Their defense kept pushing us out.”

After Malique Jacobs nailed a 3-pointer with 1:05 left to give the Golden Flashes a 44-43 lead, Jamal Shead made a layup to put Houston back ahead with 48 seconds remaining. Jarace Walker blocked a layup by Sincere Carry with 34 seconds left, and Sasser made two free throws with 29 seconds remaining.

Giovanni Santiago and Carry missed 3-point attempts for Kent State, and Sasser got the rebound with 13 seconds left. Sasser made both free throws to ice the game.

“We came in here trying to win, so we are disappointed we didn’t finish the job,” Senderoff said. “We went toe to toe, blow for blow for 40 minutes, and they made one more play at the end of the day.”

“Our guys’ competitiveness on the defensive end, that’s what kept us in the game,” Senderoff said. “That’s what our calling card is. That’s part of why we wanted to play this game was because we knew what we were getting into. Just one play short.”

Trailing by nine, the Golden Flashes went on an 11-2 run to tie it at 41 on a 3-pointer by Davis with three minutes left, but Sasser answered with a jumper with 1 1/2 minutes left to put Houston up by two.

Kent State: The Golden Flashes built a 15-5 lead by turning defense into offense, converting eight Houston turnovers into eight points. Kent State had long shooting droughts in both halves, finishing the first half missing its last 15 shots and enduring a 1-of-18 stretch in the second half.

Houston: The Cougars started slowly, going nearly seven minutes without a field goal after a layup by Roberts 1:20 into the game. Houston scored a season-low 24 points in the first half and missed its first 11 3-pointers before Tramon Mark and Sasser hit back-to-back 3s early in the second half. The Cougars committed a season-high 23 turnovers.

No. 1 North Carolina and No. 3 Kansas both lost this week, giving Houston a chance at the top spot. The Cougars haven’t been No. 1 since the final three polls of the 1982-83 season.