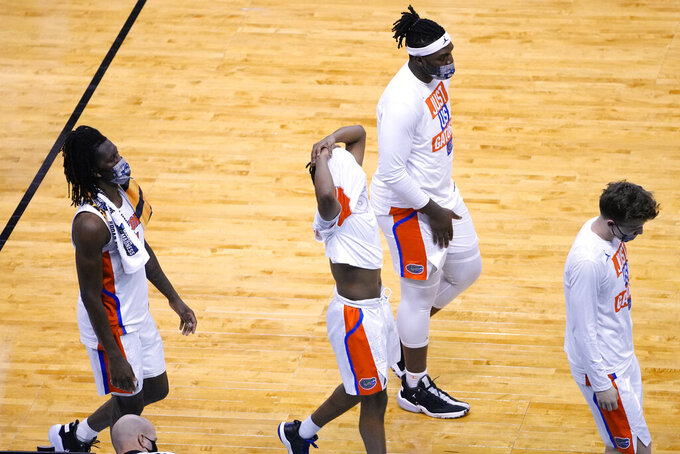 Florida players walk off the court after a college basketball game against Oral Roberts in the second round of the NCAA tournament at Indiana Farmers Coliseum, Sunday, March 21, 2021 in Indianapolis. Oral Roberts won 81-78. (AP Photo/AJ Mast)

The fraternity of No. 15 seeds to reach the second week of the NCAA Tournament has its second member.

Abmas and Obanor led the way as Oral Roberts pulled off another surprise Sunday night, reaching the round of 16 with an 81-78 victory over Florida.

The Golden Eagles erased an 11-point deficit on the way to their seventh straight victory. Next up for the Summit League Tournament champions, who eliminated No. 2 seed Ohio State in the first round, is a matchup with No. 3 seed Arkansas next weekend.

“As I told the guys, we’re not going to let somebody put a number in front of our name and tell us that that’s our worth, or that’s our value,” Oral Roberts coach Paul Mills said. “We’re not capitulating to anybody here.”

Obanor scored 28 points and Abmas (pronounced ACE-mus), the regular-season national leading scorer, finished with 26 as the Golden Eagles (18-10) closed the game on a 25-11 run to overcome the 11-point lead Florida held with less than 10 minutes remaining.

Oral Roberts joins Florida Gulf Coast — those guys from “Dunk City” — as the only No. 15 seeds to reach the round of 16 in tournament history. The private evangelical university in Tulsa, Oklahoma, has won twice in the tournament for the first time since 1974 when it reached the region final before losing to Kansas.

The Oral Roberts fans inside Indiana Farmers Coliseum chanted “Cinderella” during a wild celebration after the victory.

The chance to reach the Sweet 16 was a message hammered home by Mills after the opening victory over Ohio State. If they enjoyed beating the Buckeyes, Mills said, a week reveling in moving onto the next round would be even better.

They’ll get that chance.

Oral Roberts took a 77-76 lead — its first lead since late in the first half — on Obanor’s basket with less than 3 minutes remaining. Noah Locke answered for the Gators, but DeShang Weaver, who missed his first five shots, hit an open 3-pointer for an 80-78 lead with 2:08 remaining.

Florida had a chance but failed to get good shots on its final few possessions. The Gators had a pair of turnovers, Locke missed a corner 3-pointer and, after Obanor split free throws, difficult 3-point attempts by Tre Mann and Scottie Lewis were off line.

Mann led the Gators (15-10) with 19 points, but went quiet late in the second half, failing to score over the final 17 minutes.

Locke finished with 17 points and Colin Castleton and Tyree Appleby both added 14 for the Gators. But there will be plenty of anger and frustration after losing in the second round for the third straight NCAA appearance and a game Florida felt it gave away.

The Gators shot 55%. They outrebounded the smaller Golden Eagles 37-24 and had 42 points in the paint. But Florida committed 20 turnovers and had just three made baskets over the final 9½ minutes.

Florida coach Mike White was worried about fatigue with his players and playing slower backfired.

“We were tired. These guys get you in rotation. I was hoping slowing it down would help us make better decisions,” White said. "We made some erratic decisions. We made some passes that boy I wish we had back.”

In the eight previous instances of a No. 15 seed playing in the round of 32, only Florida Gulf Coast was able to keep its magical run going. “Dunk City” ousted San Diego State in the second round before losing to Florida in the Sweet 16.

Most times, the elation of pulling off the first-round upset led to a second-round rout. Only Coppin State in 1997 lost by less than 10 points, an 82-81 defeat to Texas.

One of the biggest decisions of the game came with 3:11 left after Oral Roberts pulled within 76-75. The Golden Eagles fouled Florida’s Osayi Osifo, a 50% free-throw shooter on the season, as soon as the ball got in his hands. Osifo missed the front end of a 1-and-1, and Obanor scored to give the Golden Eagles the lead.

Florida had Appleby back on the floor after suffering a gash on his head against Virginia Tech that knocked him out of the game. The Gators also had Omar Payne back after he was held out by a coach’s decision for the opener. Payne was ejected from the SEC Tournament quarterfinals early in the second half for a flagrant-2 foul against Tennessee’s John Fulkerson. Fulkerson suffered a concussion and facial fracture and did not play in Tennessee’s loss to Oregon State.

The Golden Eagles faced Arkansas earlier this season, losing 87-76 to the Razorbacks on Dec. 20.