Allen paces No. 8 Texas in 79-45 victory over San Jose State 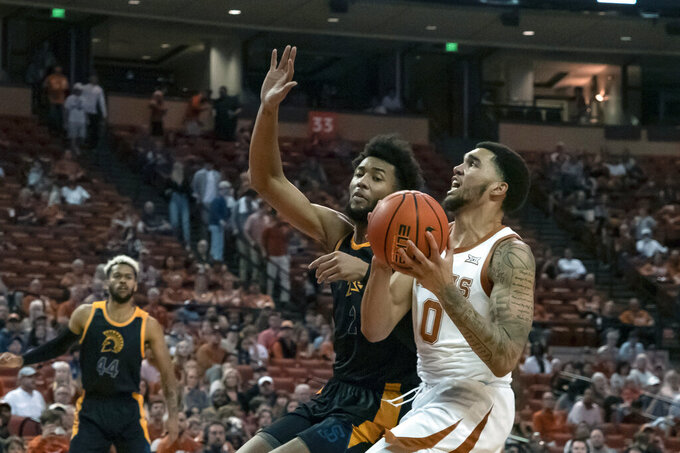 AUSTIN, Texas (AP) — Timmy Allen was an all Pac-12 first-team forward at Utah last season. He has not become self-satisfied or complacent at Texas, and wants to expand his range.

The senior forward has been working on his 3-pointer, and made his only attempt on Saturday night as part of his 17 points to help No. 8 Texas beat San Jose State 79-45.

Allen, who is one of seven who transferred to play for first-year Texas coach Chris Beard this season, averaged 17.2 points and 6.4 rebounds a game last season, but converted only 11 of 41 3-pointers (26.8%). He's hit 3 of 6 early this season. It's a start.

Another transfer to Texas, Tre Mitchell (Massachusetts), had 14 points and eight rebounds for the Longhorns (3-1). Andrew Jones scored 13, and missed only one of his six shots.

San Jose improved in the second half, getting outscored 32-28 and limiting Texas to 39% shooting.

“I grew up watching Saturday night live,” San Jose coach Tim Miles said. "They’d introduce the cast, Gilda Radner and John Belushi, and they'd announce them as the Not Ready For Prime Time Players. That’s who we were tonight.”

JONES HEATS BACK UP

Andrew Jones, a sixth-year senior for Texas who beat leukemia, had a much better night with 5 for 6 shooting than he did Wednesday, when he missed eight of nine shots against Northern Colorado. Beard said he is never concerned about Jones' shooting.

“I understand the conversation with Jones, because he’s such a documented player," Beard said. "But I’ve spent zero seconds, not even a millisecond, worrying about AJ’s offense. He got some great shots the other night. Every time he shoots, I think it’s going in.”

Jones made three steals against San Jose, giving him a team-best nine for the season.

San Jose State: The Spartans took pretty good care of the ball during their first three games, averaging 12 turnovers. But they committed 12 during the first 12 minutes against Texas, finished the first half with 19 and left themselves without a chance to make a run at Texas. ... San Jose State has not defeated a nationally ranked team since Dec. 27, 1996, when they beat No. 19 Alabama by one point.

Texas: Beard was not happy with the Longhorns' second-half performance during a 62-49 win against Northern Colorado on Wednesday. Texas led 37-15 at halftime and victory was never in jeopardy, but Northern Colorado outscored Texas 11-1 in the final three minutes. The Longhorns were better in the first half again Saturday, but didn't allow San Jose to get closer than 26.

Beard called a time out after San Jose started the second half with a 4-0 push.

"There are lessons along the way,” Beard said. “We have to get to where we are playing the game, not the scoreboard. We had some good spurts in the second half, but we have to get better every day.”