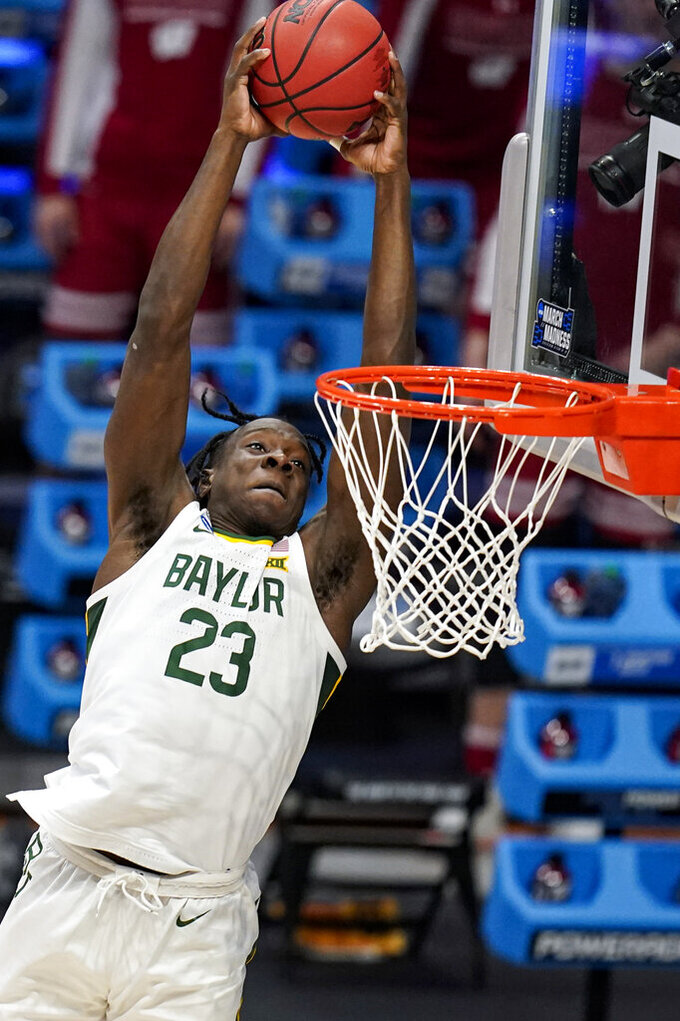 FILE - Baylor forward Jonathan Tchamwa Tchatchoua (23) goes up for a dunk against Wisconsin in the first half of a second-round game in the NCAA men's college basketball tournament at Hinkle Fieldhouse in Indianapolis, in this Sunday, March 21, 2021, file photo. All-American junior Jared Butler and his backcourt mates Davion Mitchell and MaCio Teague pretty much get all of the attention for the top-seeded Bears (26-2), who play a former Southwest Conference rival in the first national semifinal game Saturday. But those guards know they wouldn't be where they are now without the often interchangeable 245-pound post players _ the 6-foot-10 Thamba and and 6-8 Tchamwa Tchatchoua. (AP Photo/Michael Conroy, File) 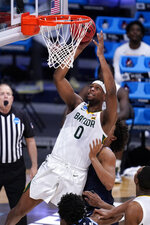 Jonathan Tchamwa Tchatchoua and Flo Thamba, the high-energy athletic bigs who do so much inside helping guard-oriented Baylor, first met at a Basketball Without Borders camp in Johannesburg, South Africa.

That was about five years ago and far from the NCAA Final Four. It was back when the two still-growing and raw players from different countries in Central Africa created a bond because they both spoke French. But after that camp, they didn't see each other again until a pickup game two summers ago, more than 9,000 miles away in Waco, Texas.

“He was like I feel like I know you from somewhere,” said Thamba, who was already at Baylor when Tchamwa Tchatchoua (pronounced CHAWM-wuh CHAT-chew-wuh) transferred there following a freshman season at UNLV.

All-American junior Jared Butler and his backcourt mates Davion Mitchell and MaCio Teague pretty much get all of the attention for top-seeded Baylor (26-2), which plays former Southwest Conference rival Houston in the first national semifinal game Saturday. It is the first Final Four for the Bears since 1950, when there were only eight teams in the NCAA Tournament, and also the last time they had won a conference title.

But those guards know they wouldn't be where they are without the interchangeable 245-pound post players: the 6-foot-10 junior Thamba and and 6-8 sophomore Tchamwa Tchatchoua, who earned the nickname “Everyday Jon” for his work ethic and nonstop energy since his arrival.

“Those guys do a tremendous amount of things that go unnoticed on the stat sheet,” Teague said. “A person watching the game might say these guards are really good, but actually our bigs make us really good.”

Thamba, who has started all 28 games, and Tchamwa Tchatchoua combine to average 9.9 points and 8.9 rebounds a game. But Teague said both posts carve out space in the lane with screens that make it easier for the guards to shoot, and there are times when Tchamwa Tchatchoua runs the floor with the smaller guys.

“Jon in transition, I think I’ve got like four 3s specifically this year because of Jon sprinting the floor, and the guard had to drop down in the paint for him,” Teague said.

Thamba, who has a 7-foot-5 wingspan, is originally from the Democratic Republic of the Congo, grew up in South Africa and also lived in England and France before coming to the United States. He said he didn’t start playing basketball until he was 12 or 13 years old, and knew little then about the NCAA Tournament.

“I knew it was a big thing, but I never like I traditionally watched the whole Final Four, or watched the whole thing,” Thamba said. “The whole experience of filling out the brackets and the anticipation of the first game, all of that stuff, I never really knew it until I actually experienced it.”

Tchamwa Tchatchoua was born in Cameroon and spent two years at the NBA Global Academy in Canberra, Australia, where he first played organized basketball.

“I really didn’t know what the Final Four meant before I even came to Baylor,” he said.

It was early Tuesday in Cameroon when Baylor beat Arkansas in the South Region final and Tchamwa Tchatchoua got his parents on a FaceTime call while he was on the ladder cutting off a piece of the net.

“I was really emotional in that moment," he said. "I just felt like it really meant something.”

Tchamwa Tchatchoua said at times he just sits down and thanks God for an “amazing journey,” and how things worked out to get him here.

Thamba said his father, who works in customs in the Democratic Republic of Congo, wanted his children to have the ability to experience and see different things. The NBA hopeful has twin older brothers who are engineers, another brother who is in finance and a sister working toward a law degree in England.

As a sixth-grader in South Africa when just starting to learn how to dribble, Thamba had another older brother who would wait for hours after school to ride the bus home with him. He said that older brother, Levy, later went to a community college in Wyoming to study engineering, but died in an accident after trying a legal marijuana edible during a spring break trip to Colorado in 2014.

“He was the guy who actually was dedicated to me more than anybody else, because everybody else just thought it was more of an intramural thing I was just doing for fun. But he saw a bigger picture,” Thamba said. “He would definitely be proud, especially the level I’ve attained and the stage I’m at.”