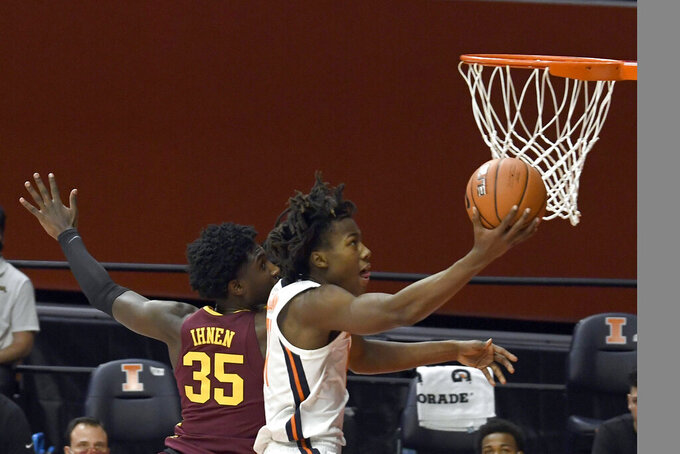 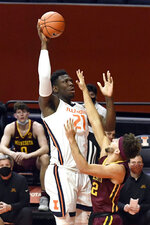 CHAMPAIGN, Ill. (AP) — Kofi Cockburn scored a career-high 33 points and grabbed 13 rebounds in only 25 minutes to lead No. 13 Illinois past Minnesota 92-65 in the Big Ten opener for both teams Tuesday night.

The previous high for Cockburn was 26 points against North Carolina A&T last December. He became the first player to have at least 33 points and 13 rebounds in 25 minutes or less against a Division I opponent since Michael Beasley had 33 and 15 for Kansas State in 22 minutes versus Iowa State in January 2008, according to STATS.

“We knew coming in we needed to keep pushing,” Cockburn said. “Big Ten teams don't give up, so we know we need to keep our foot on the gas.”

“Sometimes when you're on the road, things don't go your way,” Carr said. “We're playing in the best league in the country. It's just one loss. You can't let that carry over."

The Gophers jumped out to a 15-8 lead but finished the first half 3 for 26 from the field. They shot 23% percent before the break overall.

Illinois went on several runs, including a 22-5 spurt fueled by back-to-back 3s from Frazier to end the half.

Illinois led 40-29 at halftime and dominated the second period from start to finish.

Illinois has struggled with turnovers this season and committed 14 against Minnesota. The Gophers turned the ball over nine times.

Minnesota coach Richard Pitino was not available to reporters after the game.

Cockburn was a force the entire time he was on the court, carrying the Illini the same way Dosunmu had in earlier games.

“It was obviously a great night for Kofi,” said Illinois coach Brad Underwood. “He was dominant and that was our game plan coming in, to get it inside to Kofi.”

Cockburn was glad to get the team's first conference victory.

“Every Big Ten win is an important win,” he said. “We know how good we are and we played like it tonight.”

After beating then-No. 10 Duke 83-68 on the road followed by an 81-78 loss at Missouri, the Illini did what they needed to against a solid Minnesota team to open conference play. The outcome was never in question in the second half and Illinois used its defense and quickness to put away the Gophers.

Frazier: “We don't dwell on losses. We just put it behind us and come out and play hard."

Illinois, by virtue of beating a previously unbeaten conference foe, could slide back into the top 10 depending on how the Illini fare against No. 19 Rutgers on Sunday.

Minnesota: At home against Saint Louis on Sunday.

Illinois: Gets another shot at a ranked team when it visits No. 19 Rutgers on Sunday.