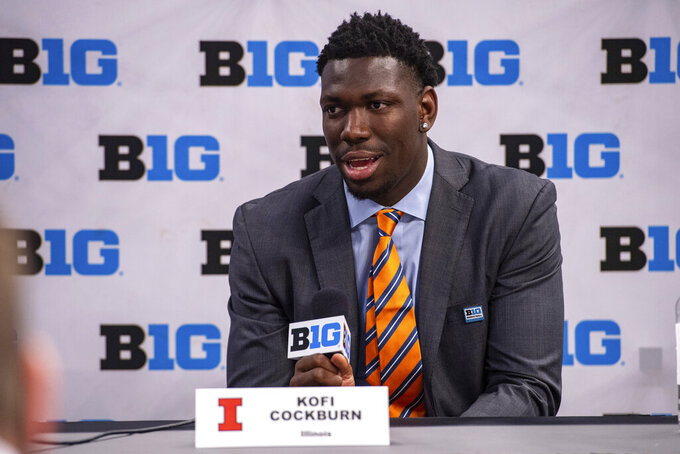 For all the excitment at Illinois this year, from earning a No. 1 seed in the NCAA Tournament to the Illini's second-round loss to Loyola-Chicago, the biggest decision for the immediate future came in the heat of midsummer when Kofi Cockburn announced he was coming back for his junior season.

The seven-foot center’s choice brought another dose of sky-high hopes for the 11th-ranked Illini, who went 24-7 overall and 16-4 in the Big Ten last season. Cockburn is the unquestioned anchor of the team after averaging 17.7 points and 9.5 rebounds per game — something he wants to better.

With Cockburn back, Illinois should have the firepower to compete for the Big Ten title again. The season opener is Nov. 9 at home against Jackson State and the first month of the schedule includes games against the likes of Marquette, Notre Dame and Cincinnati.

Curbelo is the unquestioned distributor and playmaking guard for Illinois as a sophomore. He earned Big Ten Sixth Man of the Year honors as a freshman, averaging 9.1 points, 4.0 rebounds and 4.6 assists. That early tourney exit is a source of motivation now.

“I’m going to have that in the back of my head, probably for the rest of my life,” Curbelo said. “We can’t take anything for granted. I think that’s something that game taught us.”

“Coleman has made huge strides,” Underwood said. “He’s 6’10”, he’s extremely versatile. He can be a playmaking forward for us.”

Hawkins played sparingly as a freshman, averaging just six minutes, but that looks likely to change.

“(Hawkins) literally can play the three, four and five, and is really an elite defender in his own right,” Underwood said.

“He’s elite at getting to the rim,” Underwood said. “He’s as quick-twitch of an athlete as we’ve had, but I’ve been very impressed.”

Don’t overlook the importance of fifth-year guards Trent Frazier and Da’Monte Williams. Both are strong defenders, and Williams has guarded nearly every position on the court.

“Those are two guys that I look up to a lot because they prioritize winning and they do whatever it takes,” Cockburn said. “That’s great leadership because these young guys come in and see that, ‘Yo, this is what it takes.’”

The Illini return starting wing Jacob Grandison, and added Utah graduate transfer Alfonso Plummer, who averaged 13.6 points per game and shot 38.3% from 3-point range. Plus, 6-foot-6 guard Austin Hutcherson is healthy after rehabilitating from a back injury.

"There’s no doubt Ayo was in a prominent role in everything we tried to do last year,” Underwood said. “We’ll fit these pieces in and see how it works, but right now, I really like all the pieces.”