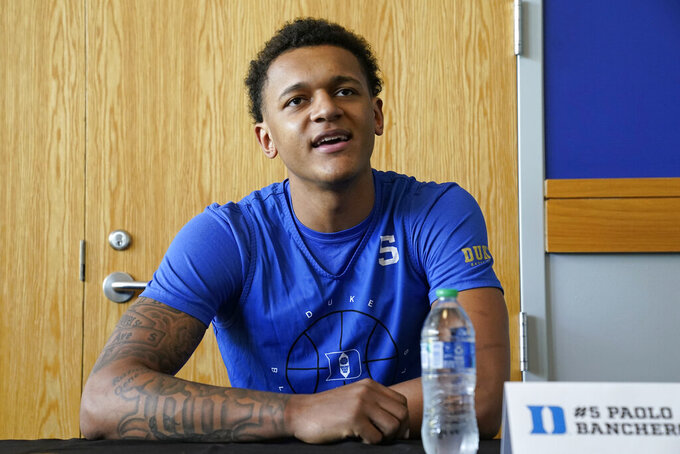 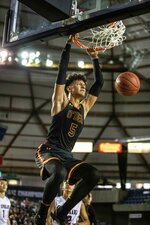 DURHAM, N.C. (AP) — Paolo Banchero doesn't fret about pressure for what's ahead — not as one of the nation's top-ranked recruits and NBA prospects, and certainly not in playing for Duke in Hall of Famer Mike Krzyzewski's final season on the bench.

“It's all fun, it's basketball,” Banchero said Tuesday at the team's preseason media day. “I'm going to go out there, I'm going to be locked in, I'm going to play as hard as I can to win. Usually when I do that, it turns out in my favor, so that's what I'm going to keep on doing.”

Banchero is the headliner in Duke's latest top-flight recruiting class with the versatility that could allow him to see a wide range of roles in what many expect to be a one-year stop in college. The 6-foot-10, 250-pound forward with perimeter skills out of Seattle is projected as a top pick – often at No. 1 or No. 2 in some order with Gonzaga 7-foot freshman Chet Holmgren -- in early mock NBA drafts for next summer.

His approach has worked so far in managing the attention and high expectations. If he needs a reminder, he doesn't have to look far, either. It's in the form of a tattoo on the inside of his right forearm: “Know pressure,” it says, with the letters “NO” inscribed in all capital letters.

“You've got to know when there's pressure,” Banchero said, “but then you've got to realize at the same time, it's no pressure.”

Banchero's arrival is part of a roster overhaul for Duke, which lost lost eight letterwinners from last year’s team that missed the NCAA Tournament for the first time since 1995. The Blue Devils return just four players who saw significant minutes last year.

While Duke routinely brings in highly ranked recruiting classes, Banchero is the Blue Devils’ highest-rated recruit (No. 2 on 247sports, No. 4 on ESPN) since adding eventual national player of the year Zion Williamson along with fellow top-5 prospects RJ Barrett and Cam Reddish in 2018.

Banchero’s highlight reels include the dunks and easy scores against overmatched opponents typical of any top recruit. But they also show a player very comfortable with handling the ball in the opencourt and pushing tempo or attacking the rim, along with the ability to hit off-dribble or stepback shots out to the 3-point arc.

“Obviously I'm not the point guard,” Banchero said. “But if I get it off a defensive rebound, expect me to push the ball, for sure.”

It’s a skillset that could allow him to be deployed all over the court, with length and size to battle bigs or harass smaller wings into mismatches — something Williamson was able to do with sideline-to-sideline and baseline-to-baseline range.

“He has to still learn how to use his skillset and size in this new venue, it’s a new environment,” Krzyzewski said. “And he’s learning how to do that. ... He’s smart and easy to play with. He still has things to do before he meets up to what I want him to do, but he’s really progressing well and a great kid to coach.”

Fellow freshman Trevor Keels, a 6-4 guard ranked as the nation's No. 22 recruit according to 247sports, has seen it firsthand in pickup games.

“When he uses his body, he's pretty much unstoppable,” Keels said, adding: “When you're 6-10 and can handle the ball like that, it's pretty unbelievable.”

Banchero said he's currently working to be more efficient with his dribble. He described it as making an immediate move on the bounce as opposed to taking multiple dribbles before building up to making the same move.

It's a small piece of being ready to close Krzyzewski's career with one more run before handing off to former player and assistant Jon Scheyer as his successor.

“Obviously we all know what it is but we're coming in with the same mindset he has and not looking at it as his last year — just looking at it as the next year for him," Banchero said. “We're going to come out and give him everything we've got because we know what's at stake.”