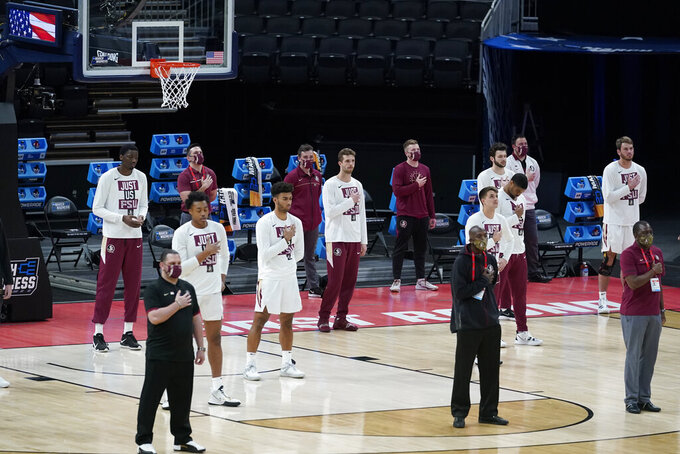 INDIANAPOLIS (AP) — RaiQuan Gray scored 17 points and No. 4 seed Florida State began what it hopes will be another deep NCAA Tournament run under coach Leonard Hamilton, holding off 13th-seeded UNC Greensboro 64-54 in the East Region on Saturday.

The Seminoles, who reached the Elite Eight and the Sweet 16 in the previous two tournaments, allowed the Spartans to hang around deep into the second half thanks to an uneven offensive performance. They will play Colorado in the second round on Monday.

Hamilton, who was rewarded earlier this month with a four-year contract extension, worked the sidelines with a ruptured Achilles tendon that he suffered before the tournament began.

“My guys depend on me," Hamilton said. “If I’m going to ask them to work hard and challenge themselves, I’m going to have to do the same thing to some degree. To be very honest with you, I didn’t even know I had the boot on once the game started. It’s a nuisance. It’s a challenge, but there are more important things than worrying about me having a little pain.”

The Seminoles were impressed with the resilience of their 72-year-old coach.

“He’s a tough guy,” Gray said. “He instills toughness in us. He doesn’t like to complain about anything or let little things bother him. He’s walking around as if he’s healthy 100%. Regardless of how he’s feeling, he’s going to show up every day and be the same coach and be that leader for us. We lean on that a lot. Seeing him walking around in that boot is extra motivation.”

Florida State went 0 for 9 from 3-point range, winning a game without a made 3 for the first time since February 2018. The Seminoles still managed to shoot 52% overall.

“I think we just took what the defense gave us," Gray said. “We knew that we had a height advantage and strength advantage on those guys. We didn’t want to settle for jump shots.”

The Spartans closed within 51-50 with 4:52 remaining, but Florida State held them scoreless for nearly four minutes after that. Socially distanced Florida State fans saluted players with the tomahawk chop as they left the court.

Balsa Koprivica had 13 points and nine rebounds and Anthony Polite added 12 points for the Seminoles.

Florida State rolled out to a 13-2 lead as Greensboro missed nine of its first 10 shots.

Koprivica went up high for a two-handed alley-oop jam on an assist from M.J. Walker that put the Seminoles up 15-4.

Greensboro started to settle down later in the first half. The 6-foot Miller dunked off an inbounds lob from the baseline to cut Florida State's advantage to 25-18.

Langley was fouled on a deep made 3-pointer from straight away, and his free throw with 36 seconds left in the half trimmed Florida State's edge to 29-26.

Langley's 3-pointer in the opening seconds of the second half tied the game at 29, but Florida State responded with a 12-0 run.

Greensboro surged again. A pair of free throws by Miller cut Florida State's lead to one point, but two quick baskets by Gray got the Seminoles back on track.

Greensboro wasn’t much better than Florida State from 3-point range. The Spartans made just 7 of 27 from beyond the arc (26%). They entered the game shooting 39% on 3s.

Greensboro coach Wes Miller on Isaiah Miller, a senior who is the two-time reigning Southern Conference player of the year and defensive player of the year: “His freshman year, we would never play him at point guard. We wouldn’t even think about it because he couldn’t make good decisions and couldn’t handle with his left hand. He couldn’t finish with his left hand. We told him he wasn’t allowed to shoot jump shots. And every year, he’s just added to his game and added something or multiple things to become a better player. So he’s improved in every way.”

Walker, Florida State’s leading scorer for the season, rolled his left ankle landing on Greensboro guard A.J. McGinnis’ foot in the second half, but he quickly returned. He has fought through knee and ankle issues this season.

Walker made a key play in the final minute, converting a fast-break layup to give the Seminoles a 59-52 lead. He finished with four points — nine below his average.