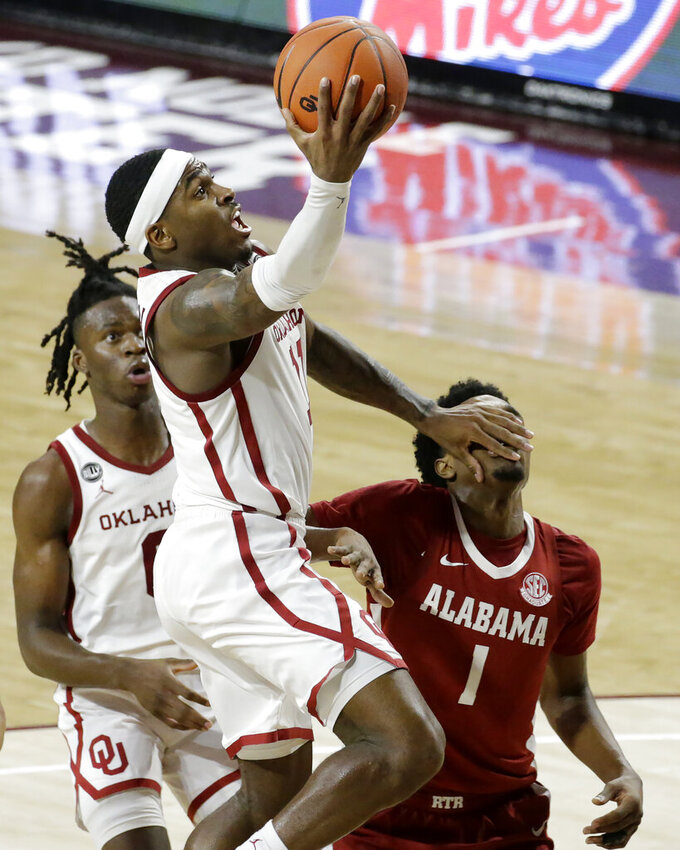 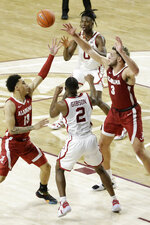 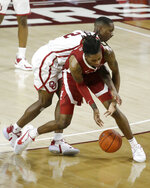 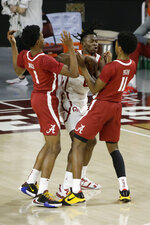 NORMAN, Okla. (AP) — De'Vion Harmon scored 18 points to help No. 24 Oklahoma defeat No. 9 Alabama 66-61 on Saturday in the SEC/Big 12 Challenge, despite playing without leading scorer Austin Reaves and starting guard Alondes Williams because of COVID-19 protocols.

Elijah Harkless scored 14 points and Brady Manek added 12 for the Sooners (11-4), who became the second team in the past 25 years to beat three top 10 teams in a row following wins over Kansas and Texas.

Reaves is Oklahoma’s leader with 15.8 points per game, while Williams averages 7.7 points.

The Sooners forced six turnovers in the first five minutes and rolled to an 11-2 lead. The Crimson Tide rallied and tied the game at 17, and a 3-pointer by John Petty Jr. finally put the Crimson Tide ahead. Oklahoma rallied to take a 32-29 lead at halftime. Harmon scored 11 points before the break.

Jalen Hill's one-handed stuff down the middle of the lane put Oklahoma up 37-34 early in the second half.

Manek struggled with his shot before he scored in close and was fouled. His free throw put the Sooners up 47-40. Manek followed with a 3 to put Oklahoma up 50-41 with just under 12 minutes remaining. The Sooners pushed their lead to 12 points before the Crimson Tide rallied. A pair of free throws by Keon Ellis gave Alabama a 60-59 lead with just under four minutes to play.

Oklahoma responded again. With a 63-61 lead in the final minute, the Sooners worked the shot clock down before Harkless hit a turnaround to push the lead to four with 19 seconds remaining and put the Sooners in control for good.

Oklahoma could surge near the Top 10. Alabama could take a significant hit with this loss, especially given the players Oklahoma was missing.

Alabama: The Crimson Tide needed this one. Because the SEC doesn't have many ranked teams, Alabama has few opportunities to prove itself against top competition.

Oklahoma: The Sooners did the Big 12 a favor with a massive non-conference win that helps justify so many teams in the conference being highly ranked.