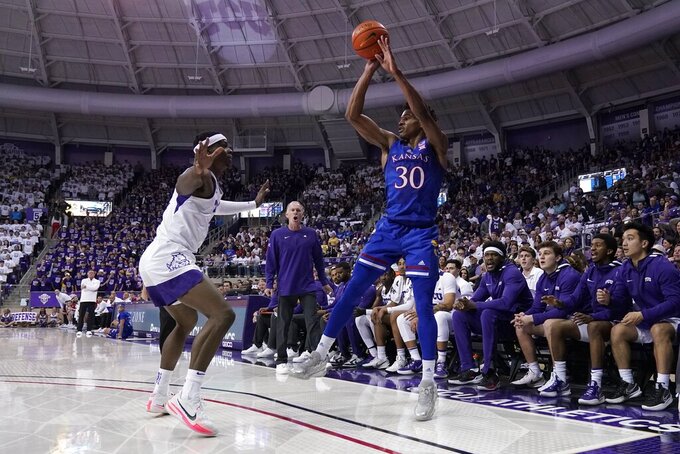 Kansas senior guard Ochai Agbaji is the unanimous pick as The Associated Press Big 12 player of the year after the league's leading scorer helped the sixth-ranked Jayhawks share the regular-season conference title with No. 3 Baylor.

The Jayhawks and defending national champion Bears are the only teams to have a player on both the AP first- and second-teams announced Tuesday, as determined by the vote of a panel of 17 sports writers and sportscasters who regularly cover the league.

Agbaji, the only unanimous first-team pick, is averaging 19.8 points a game, while shooting 47.7% from the field and ranking second in the league with 2.9 made 3-pointers a game. He is joined on the first team by Baylor guard James Akinjo, Iowa State guard Izaiah Brockington, Kansas State sophomore guard Nijel Pack and Texas Tech forward Bryson Williams.

Akinjo, Brockington and Williams are all seniors in their first Big 12 seasons since transferring to their current schools. Brockington, third in the Big 12 at 17.6 points and 7.2 rebounds a game, is the AP newcomer of the year, edging out the two others.

Texas Tech's Mark Adams was picked coach of the year in a close vote. Adams got eight votes, one more than Baylor coach Scott Drew, who woneach of the previous two seasons. First-year Iowa State coach TJ Otzelberger got the other two votes after the Cyclones went from two wins last year to 20.

Adams was promoted to head coach at his alma mater after Chris Beard left for Texas. The 14th-ranked Red Raiders (23-7), who went from unranked the first five polls to as high as ninth, finished 18-0 at home.