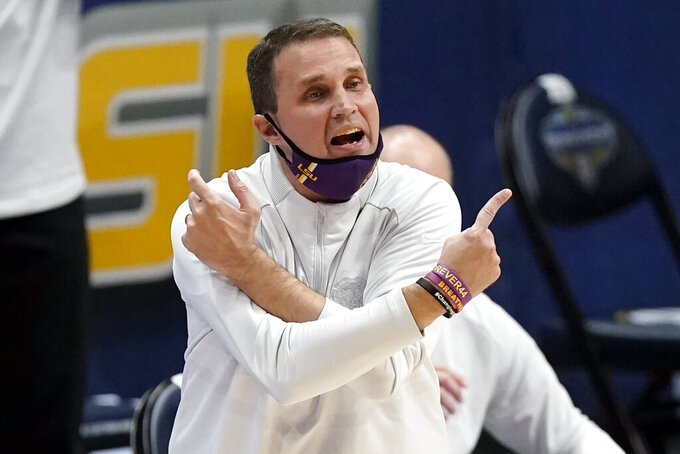 FILE - In this March 13, 2021, file photo, LSU head coach Will Wade yells to his players in the first half of an NCAA college basketball game against Arkansas in the Southeastern Conference Tournament in Nashville, Tenn. Wade dove aggressively into the college basketball transfer market to address the loss of four starters from last season including top scorer Cam Thomas. (AP Photo/Mark Humphrey, File)

The result is a group of veterans who should keep the Tigers competitive in the SEC, even if one of them is now out for the season. Adam Miller, a transfer from Illinois who won a gold medal over the summer with Team USA at the Under-19 World Cup, tore his ACL at practice Tuesday.

But LSU also picked up a three-year player from Missouri in point guard Xavier Pinson, who averaged 13.6 points and 2.9 assists last year. The other significant transfer is Tari Eason, a 6-foot-8 forward who last season played as a freshman for Cincinnati and averaged 7.3 points and 9.5 rebounds.

Pinson and Eason have joined top returning player Darrius Days and a five-player recruiting class that was ranked as high as sixth nationally by 247Sports.

“I like what we have. Some of the newer guys in the transfers have high-major experience,” Wade said. “Every year is fun, every year is a different puzzle.

Days, a senior, is the lone returning starter. Others who are back this season are forwards Mwani Wilkinson, Shareef O’Neal and Alex Fudge, along with guard Eric Gaines.

“It’s been exciting, I really like the group that we’ve put together,” Wade said. “I told the team the other day it’s hard for me to get mad at them sometimes because I like them so much.

Tigers have been an offensive showcase last three seasons, averaging more than 80 points during that span, including 81.8 points per game last season.

Wade's teams have struggled to play consistently good defense, but high-scoring games generally worked out for the Tigers.

LSU has won 39 SEC regular-season games during the past three seasons, the most of any team in the league.

Days was named Thursday to the 20 watch-list members for the 2022 Karl Malone Power Forward of the Year Award by the Naismith Memorial Basketball Hall of Fame.

Days averaged 11.6 points per game last season for the Tigers with 7.8 rebounds and a steal per game, and LSU was 19-1 when he scored in double figures.

LSU opens the regular season on Nov. 9 at home against Louisiana-Monroe. Some top nonconference matchups will include Penn State, followed by either Oregon or Wake Forest at the Emerald Coast Classic tournament on Thanksgiving weekend, followed by a date with Georgia Tech on Dec. 11. LSU also will travel to TCU on Jan. 29 for the Big 12/SEC challenge.