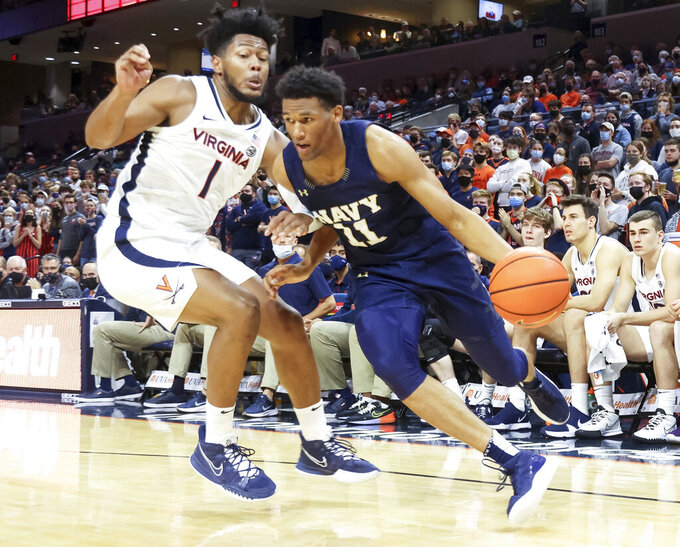 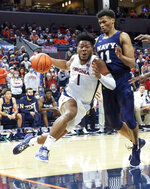 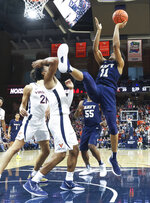 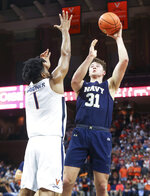 CHARLOTTESVILLE, Va. (AP) — John Carter Jr. scored 19 points, Sean Yoder added 15 and Navy got its first win over a ranked team since the David Robinson era, stunning No. 25 Virginia 66-58 in the season opener for both teams on Tuesday night.

The Midshipmen beat a team ranked in The Associated Press Top 25 — where Virginia's stay will be brief — for the first time since Robinson led them past Syracuse 97-85 on March 16, 1986.

Facing one of college basketball's top programs over the past decade, Navy was the better team in every respect. The Midshipmen outshot Virginia 45.3% to 41.2%, outrebounded the Cavaliers 35-30, got 10 second-chance points to the Cavaliers' six and had 15 bench points to Virginia's six.

“I just try to concentrate on who we are in our three things: defend, rebound, take care of the ball. And if we win two of the three of those things, we got a chance to win the game,” Navy coach Ed DeChellis said.

East Carolina transfer Jayden Gardner led Virginia with 18 points and 10 rebounds, but after the Cavaliers tied the game at 55-all with 8:53 left, they didn't score again for more than 8 1/2 minutes. Another transfer, Armaan Franklin, made a 3-pointer with 15 seconds left.

Yoder, meanwhile, scored twice inside and Daniel Deaver had a putback while Virginia went cold, making one of its last 10 shots.

Franklin's 3-pointer was his second field goal. The Indiana transfer, coveted for his outside shooting, missed nine of 11 shots and six of seven 3s in his Cavaliers debut.

Carter scored 16 of his points in the first 13 minutes as Navy blistered the Cavaliers from long range, making eight of its first 10 3-point tries. The Mids made two of their next 10 before Carter connected for his fifth with 24 seconds to play. That gave Navy a 64-55 lead and sent fans filing for the exits.

DeChellis was coaching his 299th game with the Midshipmen, and said his team's rebounding edge was something he emphasizes every day.

“We're not the most vertical squad in the country,” he said. “I'm a big rebounding guy like in the sense that, you know, if you don’t rebound, you’re not playing. You've got to go rebound. ... I'm old school.”

Navy: A hot shooting start in a hostile atmosphere demonstrated that while the Midshipmen lost their best player from last year’s team, their four returning starters play with a confidence borne of experience. Carter and Yoder led the long-distance success, but three others made a 3.

“I credit our players. They just did a great job of handling the pressure,” DeChellis said, noting it was Navy's first game in front of a crowd since 2019.

“We've got some guys with some minutes on them.”

Virginia: Bennett's signature pack-line defense often struggles early in the season, especially when incorporating new players like Gardner and Franklin. That was especially true early as the Mids made eight 3-pointers in the first 13 minutes.

Bennett said he had this question for his team afterward: “Why did we wait until the second half to lay it down with that kind of effort?”

The Midshipmen remain in Virginia to face Virginia Tech on Friday night, the second of three straight games against Atlantic Coast Conference foes. The last time Navy faced three teams from the ACC was the 1968-69 season.

The Cavaliers remain at home and play Radford on Friday night.