NBA Prospect Watch: Eason is 6th Man like no others in SEC 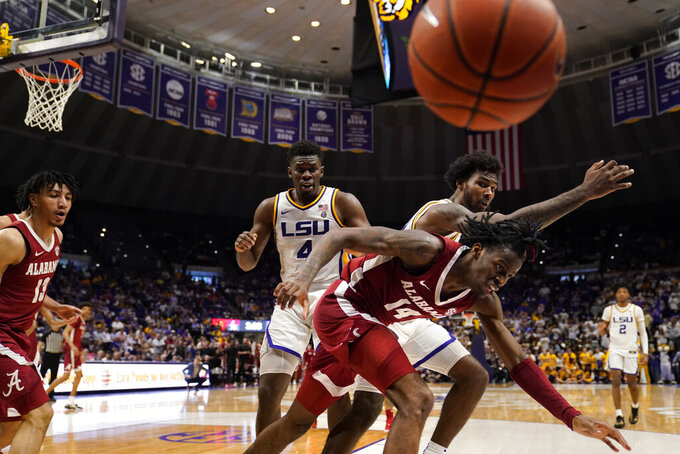 The Southeastern Conference has never had a sixth man of the year quite like LSU’s Tari Eason.

The Cincinnati transfer is averaging a team-leading 16.9 points and 6.9 rebounds off the bench for the Tigers (21-10, 9-9 SEC), making him the highest-scoring sixth man in league history. The 6-foot-8 sophomore from Los Angeles provides versatility and vitality on both ends, showing the kind of all-around game that’s made him a trendy choice to become an NBA lottery pick this summer.

“He’s the guy who brings that flair,” LSU coach Will Wade said.

Eason has scored 20 or more points in six of his last eight games. He has eight straight games with at least one 3-pointer. He has at least two steals in 11 of his last 12. He rebounds, shoots nearly 80% from the free-throw line and defends the perimeter and the post as well as anyone his size in the country.

He’s a big reason LSU is the best defensive team in the league, and it's no surprise he's a semifinalist for the Naismith Defensive Player of the Year award. His chase-down blocks are aplenty, and he’s an integral part of the team’s full-court press.

No one would have blamed Wade for inserting Eason in the starting lineup at any point this season, especially as the Tigers stumbled down the stretch. They lost three in a row in January and again in February, and then dropped three of four before rallying to beat Alabama in overtime in the regular-season finale.

But Wade continues to rely on Eason providing a spark off the bench.

They head into the SEC Tournament in as the No. 5 seed in Tampa, Florida, where they will play the Missouri-Mississippi winner Thursday.

STRENGTHS: He’s got impressive mobility for his size, able to defend point guards outside or big men inside.

WEAKNESSES: He needs to learn to better defend without fouling. He’s fouled out of six games this season, including three of the last four. Most of his disqualifications came on the road against the league’s top competition: at Auburn, at Florida, at Tennessee, at Kentucky and at Arkansas.

DRAFT PROJECTION: He’s considered a first-round lock, with many mock drafts having him going in the teens.

Others worth watching in the SEC Tournament:

G KENNEDY CHANDLER, TENNESSEE: The speedy freshman has been a catalyst for the Volunteers down the stretch, helping them win nine of their last 10. He hit a career-high five 3-pointers in a victory against Arkansas in the team’s regular-season finale.

F JABARI SMITH, AUBURN: The league’s freshman of the year — a guy who could be the NBA’s top pick in June — is playing his best as the postseason begins. The ultra-smooth Smith is averaging 25.6 points and 8.0 rebounds in his last five games. He also had made 36 of 39 free-throw attempts during that span.

F OSCAR TSHIEBWE, KENTUCKY: The conference player of the year has looked the part since late January. He has 25 double-doubles this season, including 13 in a row, and has at least 14 rebounds in 14 consecutive games.