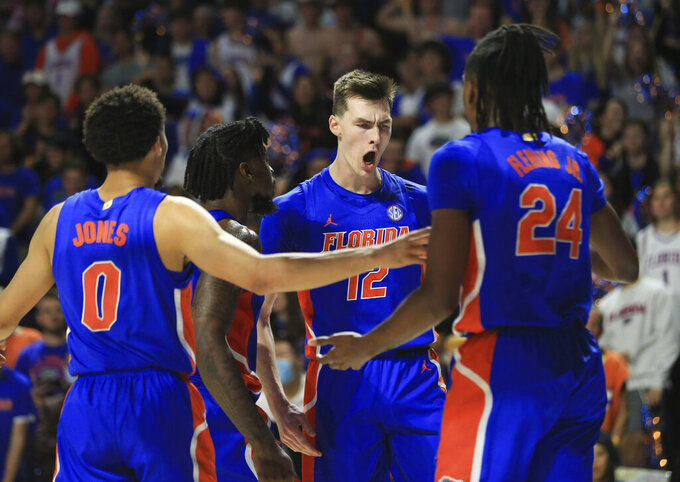 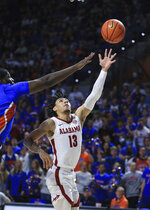 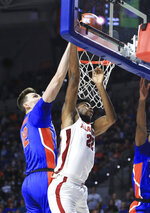 GAINESVILLE, Fla. (AP) — Alabama coach Nate Oats challenged his guys at halftime to be better “with the blue-collar stuff.” He didn't need to be more specific. They knew he meant rebounds, blocks, steals, deflections and loose balls.

The Crimson Tide responded by getting just about all of them coming out of the locker room.

Jahvon Quinerly and Juwan Gary scored 19 points apiece and No. 15 Alabama opened the final 20 minutes with a 22-4 run that was instrumental in an 83-70 win over Florida on Wednesday night.

“We came into the game saying we had to win that war and we were losing it by a large margin at the half,” Oats said. "We just weren’t playing hard enough.

"If we’re going to win tough road games, we’ve got to play harder. We didn’t make any huge adjustments on defense. We just had to play harder, be tougher, get some rebounds. I thought we picked it up quite a bit in the second half, just the whole energy level changed.”

The Crimson Tide (11-3, 2-0 Southeastern Conference) used the huge spurt to win consecutive games for the first time in a month and notch its first road victory of the season.

Florida (9-4, 0-1) whittled a 15-point deficit to 66-61 with 6 minutes to play, but Quinerly answered with a layup and Keon Ellis followed with a steal and a dunk to push the lead to back to nine. It was enough to get the Tide thinking about its last trip to Gainesville two years ago, when it squandered a 21-point lead and lost in double overtime.

“That started to go through my head,” Oats said.

This time, though, the Gators never got closer the rest of the way.

Florida lost for the fourth time in seven games and the first of three straight against ranked teams. It was a daunting stretch for the Gators that became more difficult when they had to postpone a game and pause practices because of a COVID-19 outbreak.

Coach Mike White's group was at full strength Wednesday, but several players had returned in recent days. The Gators looked sluggish at times, no more so than coming out of the locker room at halftime.

“No excuses,” Florida guard Myreon Jones said. “We just didn’t have that grit we had in the first half. We got out hustled.”

Florida missed its first nine shots and had five turnovers — three of them by leading scorer Colin Castleton — during a woeful 8-minute stretch that turned a tight game into a double-digit affair.

Ellis finished with 13 points for the Crimson Tide, which had all five starters score in double figures. Jaden Shackelford chipped in 14, and Charles Bediako added 11 points and seven rebounds.

“We just came out with a lot of energy, everybody on the court, on the bench," Bediako said. "We got a lot of defections, steals, rebounds. That was the biggest change in the game for us.”

Castleton led the Gators with 19 points but also had four of the team's 20 turnovers. CJ Felder had 12 points and Myreon Jones added 11.

Alabama will have a chance to move up in the next AP men’s college basketball poll, especially if it picks up another road win this weekend.

Alabama: The Crimson Tide entered the game at No. 21 in the NET rankings and is the only team in the nation with three wins against opponents ranked in the NET’s top 10. Beating the Gators on the road should push the Tide even higher.

Florida: The Gators' COVID layoff showed throughout. Three starters picked up two fouls in the opening 10 minutes of the game, and guard Brandon McKissic was called for his third with 1:10 to play in the half.

New Florida football coach Billy Napier got a standing ovation at halftime. It was Napier’s first public appearance in Gainesville since he was hired in early December.

Alabama: Plays at Missouri on Saturday.

Florida: Plays at No. 9 Auburn on Saturday.