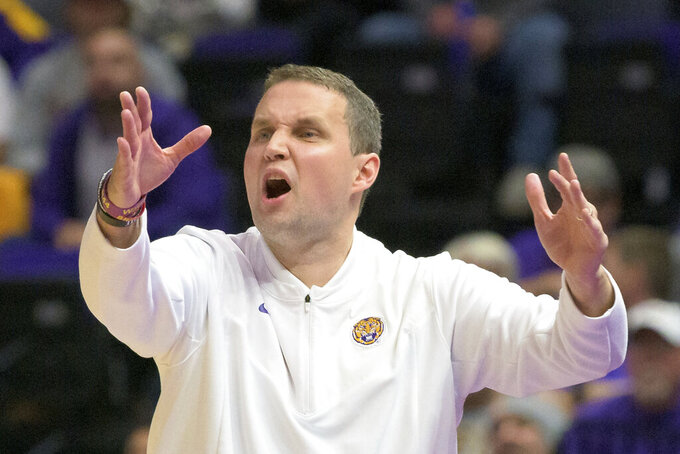 Eason scored all but five of his 18 points in the second half, when LSU already had a big lead. Three Tigers starters also scored in double figures. Xavier Pinson had 15 points and four assists, Efton Reid had 15 points and 10 rebounds, and Darius Days had 13 points.

Kendal Coleman led the Demons with 16 points and 12 rebounds. Cedric Garrett added 15 points for Northwestern State (2-9), which hasn't beaten a Division I team this season.

LSU had 17 steals and held the overmatched Demons to 17 field goals, but Tigers coach Will Wade saw room for improvement.

“We did a better job of limiting our turnovers with only 10 in the game,” Wade said. “But, our defensive rebounding still leaves a lot to be desired. We gave up 13 offensive rebounds. We’ve got to be more physical and drive guys back. Teams are going to start to tee off on that if we don’t get it corrected.”

Northwestern State held a 6-4 lead three minutes into the game before LSU’s defense took control. Over the next ten minutes, the Demons scored just five points, and the Tigers built a 26-11 lead with 7:32 remaining in the first half.

Pinson scored 10 points during LSU's 22-5 run. It didn't get better from there for Northwestern State, which scored only four more points before halftime as LSU led 41-15 at the break.

“We were 6-for-32 in the first half,” Northwestern State coach Mike McConathy said. “We just did not get any shots down. I can’t really be frustrated. We were trying.”

Northwestern State: The Demons dropped their seventh consecutive game away from home. Six of the seven defeats have been by double digits, including four by at least 30 points. Northwestern State has road games against Texas A&M and Baylor later this month.

LSU: The last time the Tigers started 10-0 was the 1999-2000 season. That team won its first 13 games and finished tied for the Southeastern Conference championship. This year's Tigers have won all but one of their games by at least 14 points.

Eason, a transfer from Cincinnati, went 7 of 9 from the field and is the Tigers' leading scorer. Pinson, a transfer from Missouri, increased his scoring average to over 10 points. He also eclipsed the 1,000-point mark for his career during the first half.

Wade's teams have historically relied on their offense, but this LSU squad is playing elite defense. Northwestern State's 15 first-half points were the fewest allowed by the Tigers in a half since Auburn scored just six in the first half during the 2010-11 season. Wake Forest is the only team to score more than 60 points in regulation against the Tigers. LSU beat the Demon Deacons 75-61 last month.