North Carolina working itself off the NCAA bubble 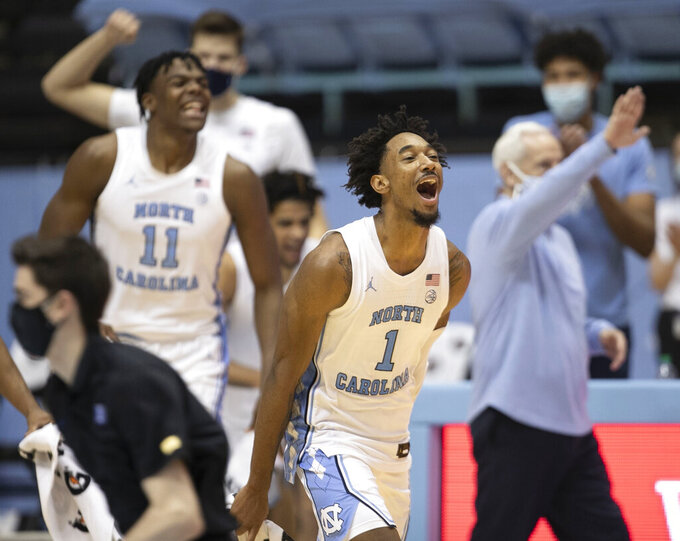 North Carolina, not all that long ago, was being lumped in with other bluebloods in danger of missing the NCAA Tournament.

The Tar Heels, Duke, Kansas and Kentucky all had their struggles at times during this pandemic-upended season, needing to turn things around if they were going to be in the field of 68.

Kansas has since turned it around. So has North Carolina.

The Tar Heels (16-9, 10-6 ACC) have given their NCAA Tournament chances a big boost in recent weeks, with victories over Louisville, No. 11 Florida State and two over rival Duke, the latest 91-73 on Saturday.

North Carolina is No. 39 in the NET rankings and will be the No. 6 seed in this week's ACC Tournament.

Wichita State (15-4, 11-2 American Athletic). The Shockers have been on a roll, stretching their winning streak to seven games by beating South Florida to clinch the AAC regular-season title. Barring a huge slipup in the conference tournament, they should be in good shape for an at-large bid.

Drake (25-4, 15-3 Missouri Valley). The selection committee should love the Drake. The Bulldogs lost to Chicago Loyola in the Valley title game but have an NET of 40 and went 6-1 against Quads 1 and 2.

UConn (14-6, 11-6 Big East). The Huskies have been nearly unbeatable when James Bouknight has been healthy, and the selection committee likely will take their injuries into consideration when Selection Sunday rolls around.

Rutgers (14-10, 10-10 Big Ten). The Scarlet Knights' bid to reach the NCAA Tournament for the first time since 1991 was quashed a year ago by the coronavirus pandemic. They're in a good place to end the streak this year, even after an ugly 21-point loss to Nebraska before beating Minnesota in overtime.

Saint Bonaventure (15-4, 12-4 Atlantic 10). The Bonnies picked up a big win over fellow bubble team Saint Louis on Saturday and have a sturdy NET ranking of 27.

Western Kentucky (18-6, 11-3 Conference USA). As much as college hoops fans would like to see Charles Bassey in the NCAA Tournament, the Hilltoppers are in trouble after a two-point loss to Old Dominion on Friday. Even with a win in the rematch, Western Kentucky will likely have to win the conference tournament to get in the field of 68.

Minnesota (13-14, 6-14 Big Ten). A seven-game losing streak has not done the Gophers any favors. Minnesota is No. 76 in the NET rankings, 4-11 against Quad 1 opponents and has a roster full of banged-up players.

Indiana (12-14, 7-12 Big Ten). The Hoosiers have lost five straight, including twice to fellow bubbler Michigan State. The Hoosiers lost a chance to boost their resume with a nine-point loss to No. 23 Purdue and may need to win the Big Ten Tournament to get into the field of 68.

Colorado State (17-5, 14-4 Mountain West). A three-point loss to fellow bubble team Nevada to close out the regular season puts the Rams a bit closer to the bubble's edge than they would have liked. Beating Boise State, another bubble team, to open the conference tournament would make them feel a whole lot better.

Syracuse vs. North Carolina State, Wednesday, second round of ACC Tournament. It's March, so the Orange must be on the bubble again. Syracuse (15-8, 9-7 ACC) closed out the regular season with victories over North Carolina and Clemson but may still need to win a couple of games in the ACC Tournament to get into the NCAA Tournament. The Wolfpack (13-9, 9-8 ACC) also have some work to do but arguably have been the ACC's hottest team, with five straight wins.